F. Scott Fitzgerald wrote that the test of a first-rate intelligence is the ability to function while holding two opposing ideas in mind at the same time. Perhaps that’s needed in the Israel-Palestine debate.

We can unreservedly condemn the indiscriminate rocket attacks on Israeli civilians by Hamas while holding Israel’s democratically elected government accountable for excessive use of force and the collective punishment and possible war crimes on Gaza residents. We can wholeheartedly defend Israel’s right to exist and protect itself while understanding the hurt and anger of generations of Palestinians living as refugees in their own homeland under the indignity of occupation.

We can disapprove of America’s one-sided, uncritical support of Israel while pointing out the roles played by Arab countries, often sacrificing the Palestinians for their own domestic political reasons.

The Middle East conflict is a chicken-and-egg conundrum fraught with political, historical and religious legacies and no easy solutions. A bit more empathy and putting ourselves in each party’s shoes may be a good start.

Re “The ‘Unshakable’ Bonds of Friendship With Israel Are Shaking” (column, May 20):

I have a simple question for Nicholas Kristof. If you believe that Israel has the right to exist as a Jewish democratic state and also has the right of self-defense (meaning that it is not required to just take indiscriminate rocket fire from Gaza), then what is it supposed to do? If you were the prime minister of Israel, how would you do things differently to protect Israeli citizens?

I am not one of these younger Jews. I am an older American Jew for whom the Israeli-Palestinian conflict has been the abiding issue of my life, a place where Jewish power and Jewish ethics collided. There is certainly no argument about which was the winner and which the loser.

But yes, I readily admit to the joy I felt upon first visiting Israel, the pride that I experienced in the great accomplishments of the reborn Jewish state. But as I grew up, and the more I read, I came to realize that the price of that Jewish state was the dispossession of the Palestinian people, the expulsion of thousands from their homes, the depopulation of 400 of their villages, an assault that continues today in the nightmarish bombing and shelling of Gaza.

This was, and is, simply too high a price to pay. And if I must take a stand, I stand with justice.

Jacob Bender
Philadelphia
The writer is executive director of CAIR-Philadelphia, the Council on American Islamic Relations.

Republican Resistance to a Jan. 6 Investigation 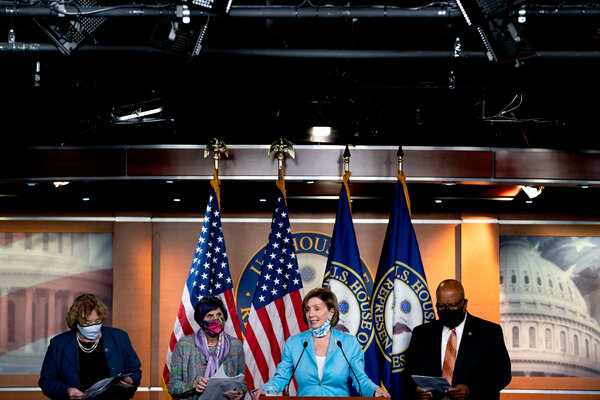 There is a one-word answer to Republicans like Representative Buddy Carter who complain that Democrats “are trying to keep Jan. 6 events alive” and not letting the nation “get past” it: Benghazi.

The attack on the Capitol was less than five months ago. Investigations of the 2012 attack on Benghazi went on for four years, with the last report submitted in 2016. But today, when the issue is an attack not on an American diplomatic compound in Libya but on the U.S. Capitol in Washington, Republicans are discovering the virtues of moving on.

Enough is enough. Speaker Nancy Pelosi should inform the G.O.P. leaders, Kevin McCarthy and Mitch McConnell, that if they do not support establishment of a commission to investigate the Jan. 6 insurrection, she will direct all relevant committees — Intelligence, Judiciary and Ethics — to start televised Benghazi-style hearings into the events of Jan. 6, including the role of the former president and House members who spoke at Donald Trump’s pre-insurrection rally.

Could we stop greeting news of reduced births with cries of concern? Obviously a small new generation will cause “demographic problems,” requiring countries to deal with the difficulties of the larger aging generations before them.

As years go by, however, that problem will abate. In a world likely to face serious problems like food and water shortages caused by global climate change, not to mention human environmental intrusions that make more pandemics perhaps inevitable, a turn toward reducing the number of human inhabitants of our planet is surely to be applauded rather than rued.