Want to get The Morning by email? Here’s the sign-up.

Good morning. The Nobel Peace Prize goes to the World Food Program. Trump says no to a virtual debate. And the F.B.I. foils a plot to kidnap Michigan’s governor. 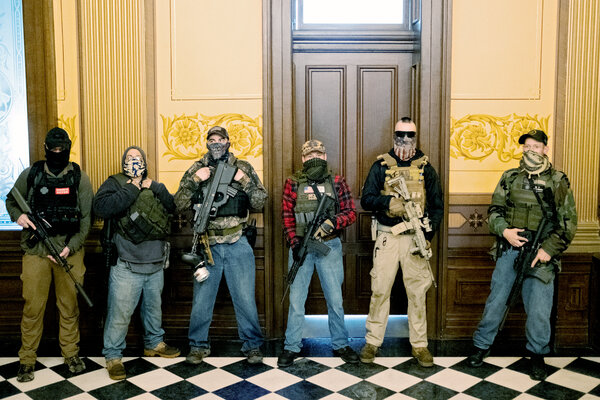 Three years ago, the polling firm YouGov asked Americans whether they thought it could ever be justified for their political party to use violence to advance its goals. The overwhelming response was no. Only 8 percent of people said anything other than “never.”

This year, YouGov asked the same question — and the share saying that political violence could be somewhat justified roughly doubled. The increase spanned both Democratic and Republican respondents.

I thought of that alarming finding yesterday, after law enforcement officials charged 13 men with a violent plot that included storming the Michigan State Capitol and kidnapping Gov. Gretchen Whitmer. Conservative groups have criticized Whitmer for her attempts to control the coronavirus by restricting normal activities. In April, President Trump tweeted, “LIBERATE MICHIGAN!”

Yesterday’s arrests are the latest evidence that a small but meaningful number of Americans believe that violence is the only answer to the country’s political divisions. “We’re seeing more and more citizens expressing openness to violence as more and more partisan leaders engage in the kinds of dehumanizing rhetoric that paves the way for taking violent action,” Lee Drutman, one of the political scientists who oversaw the YouGov poll, told me.

Since May, more than 50 people have driven vehicles into peaceful protesters. Armed protesters shut down the Michigan legislature in May. Armed groups on the left and right have done battle in Oregon and Wisconsin. Extremists have attacked journalists, including an instance in Brooklyn on Wednesday night.

“Political violence in democracies often seems spontaneous: an angry mob launching a pogrom, a lone shooter assassinating a president,” Rachel Kleinfeld of the Carnegie Endowment for International Peace recently wrote in The Washington Post. “But in fact, the crisis has usually been building for years.” She added, “This is where America is now.”

It’s important to note that the problem is bipartisan — and also that it is not equally bad on both sides: The American right today has a bigger violence problem than the American left. Of the 42 killings by political extremists last year, right-wing extremists committed 38, according to the Anti-Defamation League.

And top Republican politicians have encouraged violence in ways no prominent Democrat has. Greg Gianforte, a Republican congressman now running to be Montana’s governor, pleaded guilty to assaulting a reporter who asked a question he didn’t like in 2017.

Trump, for his part, has encouraged violence against protesters at his rallies and has often refused to condemn violent white-supremacist groups, including during last week’s debate. Whitmer, speaking after the arrests yesterday, cited that debate: “Hate groups heard the president’s words not as a rebuke, but as a rallying cry, a call to action,” she said.

Political scientists emphasize that the drift toward violence is not inevitable. When political leaders denounce violence, it often influences public opinion, research suggests. These denouncements are especially effective when leaders — or individuals — criticize their own side for engaging in violence. Condemning the other side is easy.

“Outbreaks of political violence are a real threat,” Brendan Nyhan, a government professor at Dartmouth, has written. “Every person of good faith in either party must speak up.”

For more on Michigan: The Detroit News reported that some of the plot’s conspirators met during a Second Amendment rally at the Michigan State Capitol in June. And one expert told The Detroit Free Press that Michigan “has always been a hotbed for militia activity.”

Trump threw the schedule for the two remaining presidential debates into doubt. He refused to take part in Thursday’s debate after its organizers announced the event would be held virtually, to prevent spreading the virus. In response, Joe Biden’s campaign said it would hold a televised town hall instead.

Asked about the vice-presidential debate, Trump referred to Senator Kamala Harris as a “monster.” Biden called the comment “despicable,” and said Trump “has great difficulty dealing with strong women.”

Biden, Harris and Vice President Mike Pence all traveled to Arizona yesterday, a sign that both campaigns believe the historically Republican state is up for grabs in November. Polls show Biden leading narrowly there.

Daily polling diary: Biden’s share of the vote is up to 52 percent in The Times’s average of polls, an unusually high level for a candidate at this stage in the race. And Nate Silver of FiveThirtyEight wrote, “More polls are coming in showing Biden up double digits than not at this point.”

The World Food Program, a United Nations agency, was awarded the Nobel Peace Prize today, during a pandemic that has “contributed to a strong upsurge in the number of victims of hunger in the world,” the committee said in a statement.

The White House physician said Trump had completed his treatment for Covid-19 and could resume public events as soon as Saturday, after the president revealed early last Friday that he had tested positive.

Trump suggested that Gold Star families — those whose relatives have died in military conflicts — could have spread the virus at a White House event last month. There is no evidence for the claim.

Mitch McConnell, the Republican leader of the Senate, said he had not been to the White House since early August because of its resistance to masks and social distancing. “Their approach to how to handle this is different from mine,” McConnell said.

Mark Meadows, the White House chief of staff, hosted a 70-person indoor wedding for his daughter in May, The Atlanta Journal-Constitution reported. At the time, local public health rules limited gatherings to 10 people or fewer. Photographs showed none of the guests wearing masks.

Forecasters expect Hurricane Delta to hit the Louisiana coast today, bringing high winds and heavy rains to a state that has already been battered this storm season.

A Morning read: Online orders have surged for retailers in the pandemic, as curbside pickup helps Americans satisfy their desire to hop in a car and drive to the store. What started as a coronavirus stopgap is likely to have a permanent impact on the way people shop.

Lives Lived: He was the son of a public school custodian and an emergency room nurse who grew up to become one of the great chroniclers of New York life. He crusaded against injustice and covered 9/11, the police, the subway, the coronavirus and more for six daily newspapers. Our colleague Jim Dwyer has died at 63.

IDEA OF THE DAY: What Trump obscures

Carlos Lozada, a Pulitzer Prize-winning book critic for The Washington Post, set himself a daunting (and arguably masochistic) task a few years ago: He decided to read every book that said something meaningful about the Trump era.

Ultimately, he has read more than 150 — books by the president’s most ardent defenders and harshest critics, as well as those about the larger forces that helped create Trumpism. Lozada has just published his own book about the experience, “What Were We Thinking.” One of its central points is that the best Trump books aren’t the obvious Trump books.

“The books I found most useful and enlightening in the Trump area have not necessarily been about Trump himself, but about the fights the country has always had in defining and redefining itself,” Lozada told me. Those books include Jennifer Silva’s “We’re Still Here,” about the rural working class; Erika Lee’s “America for Americans,” about immigration; and others you can find mentioned toward the end of this excerpt. (He lists 12 in his epilogue.)

Some parts of Trumpism may quickly fade when his presidency ends. But many of the toughest arguments will not, Lozada suggests: What’s the right level of immigration? What should the future of policing look like? And what about voting rights, the Supreme Court and the state of America’s democracy?

For more: The Times review calls Lozada’s book “crisp, engaging and very smart,” and The New Yorker Radio Hour has interviewed him.

Monday is Thanksgiving for Canadians. These delicious butter tarts, a Canadian specialty, are an ideal treat regardless of where you live. Small and sweet, with hints of butterscotch and caramel, each bite delivers three textures: flaky crust, chewy top, gooey center. Adding pecans or raisins helps cut some of the sugar.

The French Open plays on

The French Open is approaching its final weekend, without fans. In the men’s draw, both Rafael Nadal and Novak Djokovic have reached the semifinals. (Here’s an analysis of Djokovic, the youngest and least predictable of the Big Three of men’s tennis, which includes Nadal and Roger Federer.) The women’s final features Sofia Kenin, an American, and Iga Swiatek, an unseeded 19-year-old from Poland.

When talk of a possible TikTok ban began in July, a small social video app called Triller saw an opportunity. To attract users, the company set its sights on TikTok’s biggest names and shelled out. It rented Los Angeles mansions for top creators and paid for housekeeping, food and production equipment. When 16-year-old Charli D’Amelio, TikTok’s most-followed star, joined Triller, it provided her with a leased Rolls-Royce.

In this week’s Modern Love, a young man wonders — after losing his best friend, at 29, to the coronavirus — if love is worth the cost of grief.

The late-night comedy hosts were still focused on the fly at Wednesday’s vice-presidential debate.

Or try this week’s news quiz.

You can find all of our puzzles here.

Thanks for spending part of your morning with The Times. See you on Monday. — David

P.S. The word “whitesplainers” appeared for the first time in The Times yesterday — in an article about Black communities on LinkedIn — as noted by the Twitter bot @NYT_first_said.

Today’s episode of “The Daily” is about the campaign for Pennsylvania’s working-class voters. The Modern Love podcast is going to sound a little different this season. Listen to the trailer and tune in every Wednesday starting next week.

Ian Prasad Philbrick and Sanam Yar contributed to The Morning. You can reach the team at [email protected].

Opinion | The Skull in My Backyard