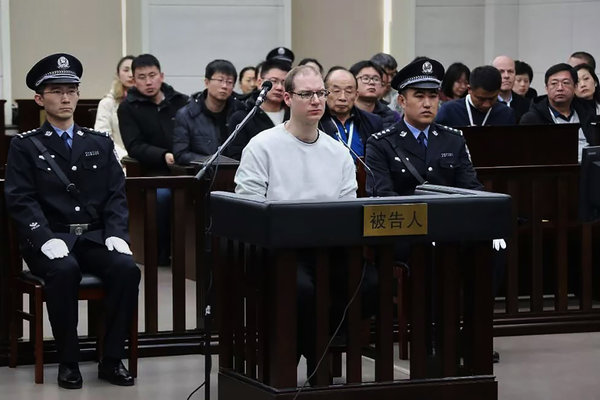 China sentences a Canadian to death

A court in northeastern China sentenced Robert Lloyd Schellenberg to death for smuggling drugs in an unusually swift retrial that escalated China’s diplomatic conflict with Canada.

The details: Mr. Schellenberg was arrested in 2014 and detained for 15 months before his first trial. It took another 32 months before he was declared guilty and sentenced to 15 years in prison. He appealed his sentence, maintaining that he was framed. A court ordered his retrial last month.

Why it matters: The retrial came just weeks after Canadian authorities arrested Meng Wanzhou, the chief financial officer of the Chinese telecommunications giant Huawei. Mr. Schellenberg’s family had voiced fears that he would be used as a bargaining chip.

What’s next? The death sentence needs to be examined and ratified by China’s highest court. The fate of two other Canadians arrested in China and accused of “endangering national security” remains unclear.

With Brexit defeat looming, May scrambles to limit her losses

The British Parliament is gearing up for a critical vote on Prime Minister Theresa May’s Brexit plan — and defeat is so widely expected that Mrs. May has been fighting not to avert a loss but to manage its magnitude.

In that vein, the prime minister enlisted fresh assurances from Europe’s most senior officials and warned again of the dangers of a chaotic “no deal” withdrawal. She also tried to cajole hard-line Brexiteers to support her, even if they hate her plan.

The vote could go down as a historically awful defeat — a margin of more than 100 votes would constitute a big loss.

Details: The vote is expected to take place on Tuesday evening in London. We’ll have live updates on nytimes.com.

Shim Suk-hee, a two-time Olympic gold medalist on the national speedskating team, said this month that she was repeatedly raped by her former coach, Cho Jae-beom, since she was 17.

Mr. Cho was fired before the Winter Olympics in Pyeongchang and has already been sentenced to 10 months in prison for physically assaulting four athletes. But Ms. Shim’s accusations have sent shock waves through the sports community.

“This unveils the humiliating underside of our country’s glorious facade as a sports powerhouse,” President Moon Jae-in said on Monday.

What’s next? The president called for a thorough investigation and more than 260,000 people signed an online petition demanding a longer prison sentence for Mr. Cho.

Ms. Shim’s revelation has also inspired other athletes to come forward — a former judo player publicly accused her former coach of repeatedly raping her since she was in high school, and a skating group said at least two other victims planned to speak.

Mr. Mattis and other military leaders opposed retaliating, arguing that the attack was insignificant. In the end, that position won out. But now senior Pentagon officials are voicing concern that Mr. Bolton’s policy of isolating and pressuring Iran could set off an armed conflict.

In Saudi Arabia: Secretary of State Mike Pompeo met with Crown Prince Mohammed bin Salman to discuss several thorny issues that have weakened the Saudi-U.S. alliance, including the killing of the journalist Jamal Khashoggi. At the same time, Mr. Pompeo reaffirmed the two nations’ shared opposition to Iran’s regional policies.

Lion Air: Indonesia found the cockpit voice recorder of Flight 610, which could help explain how the plane crashed into the Java Sea in October, killing everyone on board. Officials said the data would probably take two to three months to analyze.

Chinese vaccines: Local officials are investigating complaints that more than 100 children received expired polio vaccinations after hundreds of parents protested over the weekend, the latest in a string of similar scandals.

1MDB: Goldman Sachs has tried to blame a few rogue bankers for the multibillion-dollar fraud. But the Malaysian government isn’t buying it: “Don’t tell me you don’t know where the money went,” said the country’s finance minister, speaking with our journalist in Hong Kong.

Serena Williams: The tennis star is back in Melbourne for the Australian Open, which she won last year while pregnant. This time, though, the conversation around her threatens to overshadow the tournament itself. Follow along here for the latest from the Open.

U.S. shutdown: Airports across the country — including international hubs in Houston and Atlanta — closed some checkpoints as federal officers, who are going without pay during the government shutdown, didn’t show up to work.

Poland: The mayor of Gdansk, who was a liberal critic of the right-wing national government, died after he was stabbed onstage at a charity concert, stunning an increasingly divided country. The police said the assailant was mentally disturbed and had no clear political motive.

Gin: Sales of the juniper-flavored liquor in Britain hit about $2.6 billion last year, a revival that has made it the country’s second-most-popular spirit — surpassing whiskey.

Skiing in Kashmir: Gulmarg, in the Himalayas, is one of the world’s highest ski spots. It also sits in disputed territory between India and Pakistan where violence often flares up. Our South Asia bureau chief took his family there on vacation, despite valid concerns from his wife.

Recipe of the day: Try a tomato-free take on pasta puttanesca, with garlic, anchovies, capers and tuna. (And sign up for Five Weeknight Dishes for more recipes in you inbox.)

Tidying up? Here’s how you can make some money rather than throwing everything away.

Can’t catch any sleep on the road? This year, hotels, cruise lines, airports and airlines will furnish amenities to add more shut-eye.

Today is a 10th anniversary of a miracle.

On Jan. 15, 2009, Capt. Chesley Sullenberger safely ditched his US Airways Airbus A320 in the Hudson River after striking a flock of geese while taking off from New York City.

But the so-called Miracle on the Hudson hardly stands alone.

In 1982, a British Airways crew glided its Boeing 747 down when volcanic ash clogged all four engines.

A Taca pilot landed near New Orleans when his Boeing 737’s engines flamed out in a storm in 1988.

And a DHL crew survived a missile strike.

Soon after taking off on a cargo flight from Baghdad to Bahrain on Nov. 22, 2003, their Airbus A300 was hit by a surface-to-air missile launched by Iraqi insurgents. The damage made its flight controls inoperable.

Using only the engines to control the plane’s direction and altitude, the crew headed back to the airport and landed their aircraft (mostly) on the runway.

Your Morning Briefing is published weekday mornings and updated online. Sign up here to get it by email in the Australian, Asian, European or American morning. You can also receive an Evening Briefing on U.S. weeknights.

And our Australia bureau chief offers a weekly letter adding analysis and conversations with readers.