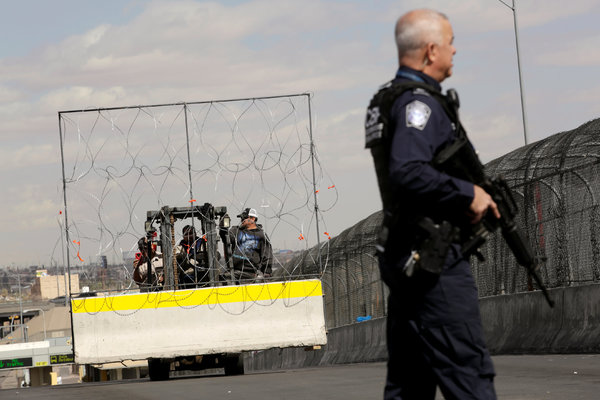 1. The House passed a resolution to block President Trump’s declaration of a national emergency on the Mexican border, with a handful of Republicans joining Democrats.

The resolution will be taken up by mid-March in the Senate. Three Republican senators have already declared their support, just one short of the number needed to send the legislation to the president’s desk. Above, wall construction at the border in El Paso last week.

While it is unlikely that there would be enough votes to overturn a promised presidential veto, the resolution does assert Congress’s constitutional authority over spending, and its passage could bolster numerous lawsuits that maintain that Mr. Trump’s declaration is an illegitimate end run around Congress’s power of the purse.

2. President Trump may be willing to ease U.S. demands on North Korea, at least for now.

Mr. Trump and the North Korean leader, Kim Jong-un, exchanged fiery threats in 2017, but in the second round of talks, the president wants a deal — and appears to be willing to shift his administration’s goals to reach one, from immediate dismantlement of the North’s arsenal to limits on its size and reach. Above, Mr. Trump arriving in Hanoi, Vietnam, on Tuesday.

The two leaders will have dinner together on Wednesday night (which is early Wednesday Eastern Time), and then a formal one-on-one meeting. Here’s what’s at stake.

Michael Cohen, pictured above, testified for the first of several days. President Trump’s former personal lawyer and fixer was behind closed doors today, and he’ll have a public session before a House committee Wednesday beginning at 10 a.m. Eastern (we’ll have it live) and another private session on Thursday.

A Florida congressman, Matt Gaetz, apparently unnerved by reports that Mr. Cohen would describe the president’s possible criminal conduct and go into “granular detail” about the plan to pay hush money to Stormy Daniels, tweeted a threat at him:

“Do your wife & father-in-law know about your girlfriends? Maybe tonight would be a good time for that chat. I wonder if she’ll remain faithful when you’re in prison. She’s about to learn a lot…”

Separately, big pharma faced a day of reckoning. Seven pharmaceutical executives defended high drug prices at a Senate hearing, insisting they were not profiteering. Their solution: Keep list prices high, but add caps on out-of-pocket costs paid by patients and let insurers pick up the difference.

4. Mark Harris, the North Carolina Republican whose congressional campaign paid for an absentee ballot effort rife with misconduct, said he would not run in a new election.

Mr. Harris, pictured above at a hearing last week, attributed his decision to his health and said the Ninth District deserved “to have someone at full strength during the new campaign.”

The state board has not yet set a timetable for the new election, and Democrats are expected to mount an aggressive campaign behind Dan McCready, their candidate in last fall’s race.

5. Chicago voters headed to the polls today to choose a new mayor in one of the most wide-open elections the city has seen. The blur of 14 candidates has no clear favorite.

Many African-Americans cast their votes another way: by leaving. They have moved away by the thousands every year, sick of entrenched gang violence, miserable job prospects and shuttered schools, even as new white residents flow in.

6. As General Motors and Ford move toward drastic cuts, Fiat Chrysler is heading in the other direction.

Despite forecasts for slowing U.S. auto sales, the Italian-American automaker plans to create 6,500 jobs by spending $4.5 billion on several Detroit plants, like the one above. The plants will produce three large Jeep models, reflecting consumers’ growing preference for bigger vehicles.

But the company is trimming operations at an Illinois plant, cutting almost 1,400 jobs.

7. What does Hollywood keep getting wrong about race?

On today’s episode of “The Daily,” Wesley Morris, our critic at large, talks about Hollywood’s obsession with fantasies of racial reconciliation and why it’s not surprising that there are echoes of “Driving Miss Daisy,” a best picture winner 30 years ago, in this year’s winner, “Green Book,” above.

Mr. Morris explored the topic of interracial friendships in film in this essay last month.

8. Shot-putters might be the only athletes in the world who refer to themselves seriously as “human cannons.”

Take Ryan Crouser and Joe Kovacs, for example, the reigning Olympic gold and silver medalists in the shot-put. They can heave a 16-pound ball farther than just about anyone, and their competition and friendship have become track and field’s version of a buddy flick. Mr. Crouser, above left, and Mr. Kovacs, above center, competed in New York this month.

We talked to them about what it’s like to travel the world together, and bond over things like strength training and eating absurd amounts of food.

9. Are some celebrity mediums fooling their audience members by researching them on social media? A group of online vigilantes is out to prove it.

The Times Magazine goes inside the secret sting operations to expose celebrity psychics. One group hopes to catch them at their own game by using fake Facebook profiles as bait: The social media platform has become a clearinghouse for the kind of personal detail that psychics used to have to sweat for.

If anything, “the psychics have just gotten lazier,” a member of the group told our writer.

10. Finally, an ode to a different kind of culture.

Homemade yogurt is central to South Asian cuisines, a cooling respite to spicy dishes or a sweet tang for desserts. But it is the starter culture that gives each yogurt its unique, familiar flavor, and generations of families around the world have their own.

Our writer explores the importance of passing down yogurt’s most important ingredient and the lengths families will go to keep that narrative (and culture) going. Above, a mother and daughter in Glasgow making their family’s recipe.

“There was never store-bought yogurt in our house, because none compared to my father’s velvety, tart homemade tufts,” our writer says. “They looked like icebergs in your bowl, and made your cheeks pucker pleasantly. This yogurt tasted alive.”

Have a delicious evening.

Correction: Due to an editing error, an earlier version of the briefing misstated the president to whom Susan Rice served under. It was President Barack Obama, not President George W. Bush.