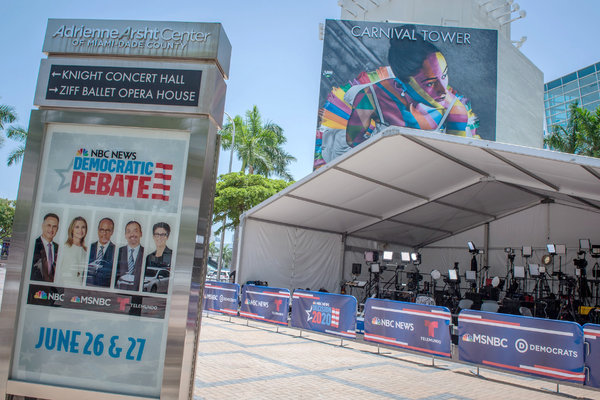 The first Democratic debates of the 2020 presidential race have arrived, taking place tonight and tomorrow night from 9 to 11 p.m. Eastern. Ten candidates from the sprawling field will debate each night. Here are some political dynamics and tension points to watch for.

Will sparks fly? Here’s how tonight’s debate is likely to unfold.

Follow along here for live updates and analysis. Here is every 2020 candidate roasted via haiku by a comedy writer to get your night started.

With Robert Mueller set to testify next month, President Trump lashed out at the special counsel, repeating false claims that Mr. Mueller’s investigators had destroyed text messages by F.B.I. officials critical of the president.

In an interview with Fox Business Network, the president also blasted the Federal Reserve chairman, Jerome Powell, and suggested that no one had heard of Mr. Powell until Mr. Trump tapped him to run the Fed.

3. The Senate approved $4.6 billion in border funding with few strings attached, setting up a clash with the House, which yesterday passed a competing bill that aims to rein in President Trump’s immigration crackdown.

House Democrats say the Senate measure does too little to ensure improvements at juvenile detention centers. Accounts of horrific conditions facing unaccompanied migrant children, as well as a wrenching photo of a drowned father and daughter trying to seek asylum, have inflamed the urgency surrounding passage of emergency aid measures.

Administration officials have warned Congress that they will run out of funds to house and care for migrants at the end of the month.

4. Boris Johnson, the front-runner to become the next British prime minister, is frequently caught in gaffes, oversights and outright lies. And that’s what his supporters like about him.

Here’s how he became one of the great escape artists of British politics.

Our Interpreter columnists noted last week that he also embodies the British ideal that it is “preferable to have success without visibly striving to achieve it.”

Politics aside, the heat is on in most of Europe: Meteorologists say temperatures could climb above 40 degrees Celsius, or more than 104 degrees Fahrenheit, across large stretches of the continent.

Online marketplaces like StockX have turned rare Jordans and Yeezys into tradable commodities. Now the sneaker-trading start-up has hired a new chief executive, pictured above left with the company’s founder, to expand its business and scored a fresh round of financing that values it at more than $1 billion.

The rise of StockX, along with competitors like GOAT Group, Stadium Goods and Bump, is pushing brands and retailers to rethink the potential of resale sites as serious distribution channels.

Few shoes are more revered by sneakerheads than Nike Air Force 1s. A Times Magazine contributor writes that the iconic shoes “were sacred in my town, and still are. We Baltimoreans call them ‘Airs’ because they’re as important to us as oxygen.”

6. Pride parades were inspired by the 1969 Stonewall riots, which pitted L.G.B.T.Q. people against the police. So do officers belong at Pride today?

Activists have long debated that question, and with Pride festivities underway around the world, the complicated issue is on the front burner.

Meanwhile, Jenna Wortham writes about the history and joy of queer parties, which have historically offered a place for road-testing new looks, identity expressions, desires and orientations.

7. For years, tours of historic Southern homes focused on their architecture and fine furniture, but not on how slave labor created the wealth on display.

Now that’s changing as some plantations and museums tell stories of slavery that fill in the gaps, revealing the black people who built the residences.

“What we’re looking at is the political power of the people who lived here,” said Lacey Wilson, above, a historic interpreter in Savannah, Ga. “All the beautiful decorative objects throughout the house — the money coming for all these things came primarily from the enslaving of other human beings.”

The New York Times’s book critics selected the 50 most outstanding memoirs published in the past 50 years. Here’s how they made their choices, including Vivian Gornick’s memoir on growing up in the Bronx, pictured above in 1958.

“I was looking for memoirs that really crack open a world, that have the intensity of first-rate novels, that make us feel we’ve been brought along on an adventure,” said Dwight Garner.

And for all you would-be editors out there, here’s the latest installment of our copy editing quiz.

9. And now for a delicacy inspired by Ikea.

The negroni that Gabrielle Hamilton serves at her New York restaurant derives from a trip to Rome, and her Calvados omelet is a homage to a summer in France. But her overstuffed rock-shrimp roll was inspired by a bike ride in Brooklyn to the Swedish furniture store (true to its origin, some assembly is required).

If you’re looking for something on the heartier side, Yotam Ottolenghi shares his tips for the best British pie. Sourdough chunks are the perfect pairing for a creamy celebration of seafood.

10. Finally, escaping the tyranny of the clock.

Residents of a picturesque Norwegian island called Sommaroy, just north of the Arctic Circle, want to banish clocks and live beyond the constraints of time. That’s because, for them, once the sun rises on May 18, it does not set again until July 26.

Residents, who are already fond of playing soccer, kayaking or mowing the grass in the middle of the night, have filed a petition to create what they say would be the world’s first “time free” zone. To be clear, the luxury of timelessness would mostly be for those who have time off in the first place: Classes at the local school, students will be relieved to know, would not go on forever.

Have a bright night.