A new federal grand jury has been empaneled in Minneapolis and the Justice Department has called new witnesses as part of its investigation of Derek Chauvin, the former police officer who will go on trial in state court next month on a murder charge for the death of George Floyd, according to two people with direct knowledge of the investigation.

The fresh slate of witnesses subpoenaed to give testimony about Mr. Chauvin is an early sign that the federal investigation into the death of Mr. Floyd, which began last year and then languished, is being reinvigorated under the administration of President Biden.

Mr. Chauvin, who is white, was seen in harrowing video footage kneeling for more than nine minutes on the neck of Mr. Floyd, a Black man, as he begged for his life. The video set off protests across the United States, some of which led to violence in cities including Minneapolis, Seattle, Portland, Ore., and Washington, D.C.

It is unlikely that the Justice Department, in presenting evidence to a new grand jury, is hoping for a quick indictment of Mr. Chauvin before his state trial, which is scheduled to begin March 8. But if there was an acquittal or a mistrial, attention would immediately shift to the federal investigation, and to whether Mr. Chauvin would face trial for violating Mr. Floyd’s civil rights.

As a new grand jury begins to hear more testimony in the case, the investigation has apparently narrowed to focus on Mr. Chauvin, rather than the three other former officers who face aiding and abetting charges, according to one of the people briefed on the matter, who was not authorized to comment publicly and spoke on the condition of anonymity. A spokeswoman for the Justice Department declined to comment on the investigation.

As Mr. Chauvin’s trial looms, Minneapolis is consumed with fears that the proceedings could provoke more unrest. The National Guard has been activated to protect the city’s downtown during the trial, and law enforcement agencies from around the state are being called upon to help secure the Twin Cities. Mr. Chauvin, who is free on bail and has been allowed to live outside Minnesota because of security concerns, is charged with second-degree murder and second degree manslaughter.

The Justice Department’s investigation into Mr. Chauvin is also shaping up as an early test for Mr. Biden, who has vowed to allow the department to operate independently of the White House.

Mr. Biden has said that Mr. Floyd’s death was an injustice born from America’s long history of racism. “The very soul of America is at stake,” he said in a speech soon after Mr. Floyd died. “We must commit as a nation to pursue justice with every ounce of our being.”

During the presidential campaign, Mr. Biden vowed to give new powers to the Justice Department’s civil rights division and elevate civil rights as a priority within the White House, a statement that at the time raised doubts about how independent it would be.

Mr. Biden has not been involved in or briefed on the Justice Department’s investigation into the death of Mr. Floyd, according to a White House official. But the White House has staff members working on civil rights issues in both the White House Counsel’s Office, as well as through the Domestic Policy Council. 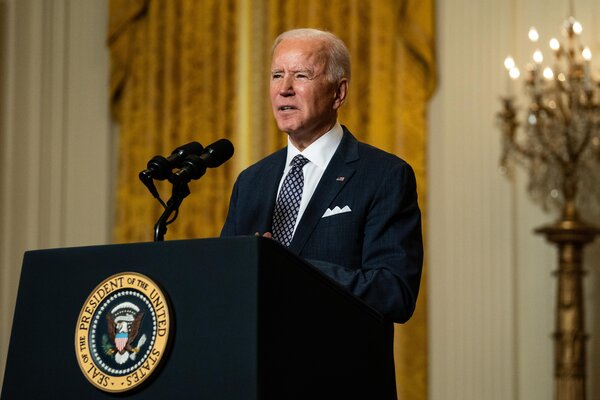 The White House, in a statement, said, “the president has spoken in personal terms about how the death of George Floyd affected him and redoubled his commitment to advancing racial justice, but he’s also made clear that he firmly believes that the Department of Justice must be able to act independently in investigating and prosecuting any case.”

Three days after Mr. Floyd died, Erica MacDonald, the outgoing U.S. attorney in Minnesota, said that her office and the Justice Department’s civil rights division would investigate whether the officers violated federal law, calling the case a “top priority.”

But the attorney general at the time, William P. Barr, said at a news conference that “as a matter of comity,” the department “typically lets the state go forward with its proceedings first,” a statement that put to rest the possibility that a charging decision would come before the election.

Nevertheless, Mr. Barr made clear that the video was harrowing. “When you watch it, and imagine that one of your own loved ones was being treated like that, and begging for their lives, it is impossible for any normal human being not to be struck in the heart with horror,” he said.

As The New York Times recently reported, three days after Mr. Floyd died on May 25, Mr. Chauvin was ready to plead guilty to third-degree murder and go to prison for more than a decade. But the offer fell apart after Mr. Barr, at the last minute, rejected the deal, which had been contingent on the Justice Department agreeing not to bring additional federal charges in the future. Last summer, a federal grand jury in Minneapolis, which has since expired, began hearing evidence and testimony about Mr. Floyd’s death.

The department has previously opened up investigations into several high-profile assaults and killings of Black people by police officers — including the killings of Eric Garner on Staten Island; Tamir Rice in Cleveland; Michael Brown in Ferguson, Mo. — but it has rarely charged officers in those cases.

Former Justice Department officials said that is in part because the department has only one charge it can bring in these cases — that in the course of policing, an officer willfully deprived a person of their civil rights — and that the charge is difficult to prove. (The charge does not involve race, but is based on the idea that an officer “willfully” violated someone’s constitutional rights, such as protection against unreasonable seizure, or the right to due process.)

While it is easier to show that an officer’s use of force deprived a person of their civil rights, whether it was “willful” or not has been a challenge, said Jonathan M. Smith, a former official in the Justice Department’s civil rights division who now serves as executive director of the Washington Lawyers’ Committee for Civil Rights and Urban Affairs.

“Willfulness is the highest intent standard under criminal law — that the person set out to act with the purpose of depriving someone of their rights,” Mr. Smith said. “You need to prove that the law enforcement officer actually knew that he was going to violate someone’s rights and acted with that purpose in mind. It’s akin to proving first-degree murder.”

The Justice Department said last year that it was reviewing other high- profile police shootings that fueled months of protests over police brutality. After a 29-year-old Black man named Jacob Blake was shot seven times in the back by a white officer in Kenosha, Wis., in August, the department said that it had opened a civil rights investigation into the incident. It confirmed that the investigation was ongoing in January, after the Kenosha County district attorney declined to charge the officer who shot Mr. Blake.

Similarly, the F.B.I. said in May that it was investigating the fatal shooting of Breonna Taylor, a Black health care worker in Louisville, Ky., after Gov. Andy Beshear asked local and federal investigators to look into the case. The results of the F.B.I. investigation have not been released, and the department has not said that it will open a civil rights investigation into the officers involved in Ms. Taylor’s killing.

The statute was used successfully in hundreds of cases under the Obama administration, for instance, to convict officers of abusing their authority to sexually assault victims or to beat inmates, Mr. Smith said. But in the most high-profile police assault and killing cases, it has been seldom used.

This is one reason some former Justice Department officials and politicians like Vice President Kamala Harris, a former prosecutor herself, have advocated for either changing the statute so that willfulness is no longer the standard, or passing a new federal law that makes it illegal for an officer to recklessly deprive a person of their civil rights, rather than willfully deprive them.

Judge Merrick B. Garland, Mr. Biden’s nominee to run the Justice Department, said on Monday during his Senate confirmation hearing that he would consult with the career lawyers in the civil rights division about whether to lower the willfulness standard.

“I’d like them to know from talking to them what kinds of changes might be necessary in the statute” and the potential consequences of changing the requirement, Judge Garland said.

That is not to say that the statute has never been successfully used in police brutality cases. When Mr. Barr was attorney general under President George H.W. Bush, he oversaw the investigation that led to the convictions of two officers who viciously beat the motorist Rodney King, even after they were acquitted on separate state charges.