Why Are States Imposing Virus Curfews?

Cities, states and counties from Massachusetts to Colorado have imposed curfews on residents and businesses to try to curb the spread of the coronavirus, as caseloads reach new highs around the country.

The curfews, enacted by Republican and Democratic leaders, now affect residents in two of the country’s biggest states. In California on Thursday, Gov. Gavin Newsom ordered “a limited stay-at-home order” in dozens of counties, barring “nonessential work and gatherings” from 10 p.m. to 5 a.m. And in New York this month, Gov. Andrew M. Cuomo ordered bars, restaurants and gyms to close by 10 p.m.

Some cities, like Newark, have taken a more targeted approach, setting a curfew for residents in ZIP codes with soaring case numbers, and leaders in Europe have made similar moves, like a 10 p.m. curfew for pubs and restaurants in England.

But the patchwork response, with rules sometimes varying from town to town, also has some residents asking: What effect could a curfew have on a virus that seems to be everywhere, spreading day and night?

What’s the point of a curfew?

Nicholas Gradisar, the mayor of Pueblo, Colo., said his city’s curfew aimed to decrease mobility among those with the highest infection rate in the state, ages 20 to 50, who are also most likely to be out late at night. The city had a severe spike in cases after Labor Day and imposed a curfew the night before Halloween to try to prevent a similar increase. It was recently extended to Nov. 27.

“The rules for when bars are open are supposed to be that you can come down with your group and you don’t interact with others,” Mr. Gradisar said. But people are less likely to do this after a few hours of drinking, he added. “That’s how this virus spreads.”

Governors have given similar reasons for asking residents to stay home at night except for essential needs like groceries, framing curfew measures as a compromise between a full lockdown and keeping businesses open. 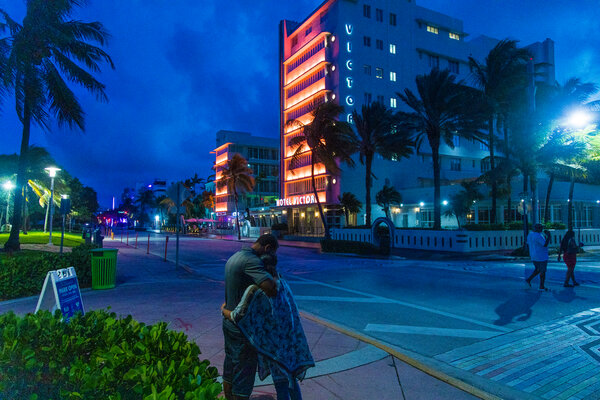 Dan Tierney, the press secretary for Gov. Mike DeWine of Ohio, where a 21-day curfew from 10 p.m. to 5 a.m. was instituted starting Thursday, said the governor had considered closing bars, restaurants and fitness centers altogether. But the economic impact would have been too damaging, Mr. Tierney said.

Instead, he said, the hope is that the curfew, combined with the statewide mask mandate and social distancing, will encourage people to reduce their contact with others.

“We think we can make a dent in these numbers by doing what we’re doing,” he said.

Gov. Charlie Baker of Massachusetts said at a news conference this month that the state’s stay-at-home advisory was meant to “reduce the number of opportunities and activities where people gather in groups and get them home with only members of their household.”

In California, counties with severe outbreaks will have a curfew beginning Saturday. Dr. Mark Ghaly, the secretary of California health and human services, said the state’s order was meant to “target activities that are particularly high risk,” like eating and drinking inside restaurants.

“We’ve seen in the past that Covid goes from zero to 60 miles per hour very quickly,” he said at a news conference on Thursday.

What can go wrong?

While the authorities hope curfews reduce transmission, their enforcement abilities are limited. Some bar patrons, for instance, may gather in homes after a few hours of drinking — and at-home gatherings of any kind would be difficult to prevent.

“These are best guidelines, so we’re not expecting police to go knocking on people’s doors or anything Orwellian like that,” said Mr. Tierney, the Ohio press secretary. “We’re hopeful that Ohioans will do what they need to do.”

And though the curfews are meant to be more economically palatable than full lockdowns, some businesses that depend on late customers expect to take a hit.

“It’s going to have an immediate effect on our revenue,” said Jeff Castleberry, owner of Caz’s Pub in Tulsa, Okla., where the governor recently set a curfew. Mr. Castleberry said that the bar installed a filtration system and has taken fewer customers as a safety precaution, but that losing late business will cut deep.

“We’ve been trying to operate in the right, and operating that way has cost us about 25 percent of our revenue,” he said. With the curfew, he anticipated, “we’re going to lose half of that 75 percent.”

Do the curfews work?

Mr. Gradisar, the mayor of Pueblo, said there wasn’t enough data yet to show whether the curfew has helped. He said that cellphone usage data, analyzed by the Colorado Department of Health, has demonstrated decreased mobility between 10 p.m. and 5 a.m.

“You say, ‘Don’t have private parties,’ ‘Don’t have Halloween parties,’ but that’s nearly impossible to enforce,” he said. “At least we’re breaking up the parties a little earlier.”

But like cities around the country, Pueblo has had a significant increase in cases. Given this spike, Mr. Gradisar said he and other local officials were “desperate to try anything at this point.”

Health experts said it was not clear how effective curfews could be. Dr. William Schaffner, an infectious disease specialist at Vanderbilt University, said that while curfews might have a “modest impact,” they should be “considered as part of a whole series of interventions” that need to be sustained.

“There are no quick fixes here,” he said.

Dr. Helen Boucher, an infectious disease specialist at Tufts Medical Center, said that, because mask mandates, curfews and rules against gathering indoors are being put in effect together, it will be difficult to determine which made the biggest difference.

“If we see benefits in a month, was it one of them or was it all of them?” she said. “It’s hard to ascertain. This is not a controlled trial. This is real life.”

Dr. Gregg Gonsalves, an assistant professor of epidemiology at the Yale School of Public Health, called curfews a “crude, inelegant instrument” being used to address a problem without a simple answer.

“In many places, it’s small gatherings at home,” he said of transmission, describing a scenario with “four of us having dinner, and none of us assumes we have Covid.”

Dr. Gonsalves said the curfew measures, combined with other measures, were “a logical approach,” borne out by practical experience in the United States and across the world. “We’re doing what seems to reduce contacts.”

But he said that leaders’ efforts were suboptimal if understandable, given their compromised position. People are weary of isolation, and the cost of giving up social ties this holiday season is high. Workers at bars, restaurants, gyms and other businesses need economic support, but Congress has signaled that another stimulus package is unlikely before year’s end.

“It’s really like putting a Band-Aid on a machete wound,” Dr. Gonsalves said. “It’s not about Republican or Democratic governors. They’re all in the same boat. They’re not getting support. Faced with the onslaught, mayors and governors would love to do more. But they can’t do more.”

Trump, in video from White House, delivers a 46-minute diatribe on the 'rigged' election

COVID-19: US facing ‘most difficult health crisis in its history’ as it records highest daily death toll yet