Home » Americas » Why Are Colombians Protesting?

Why Are Colombians Protesting?

BOGOTÁ, Colombia — Protests have rocked Colombia for a month, with thousands of people pouring into the streets of its major cities, demonstrators blocking highways and police responding — at times with lethal force. More than 40 people, many of them protesters, have died.

On Monday, the government of President Iván Duque said it would not immediately grant a request by the Inter-American Commission on Human Rights to visit and investigate allegations of human rights violations.

“All visits are welcome,” said Marta Lucía Ramírez, vice president of Colombia, during a trip to Washington. But, she added, outside groups will have to wait until Colombian authorities conduct their own investigations into wrongdoing.

Demonstrators have achieved some of their demands, but they have vowed to stay in the streets. Protest leaders, many of them heads of major labor unions, have called for large marches in the country’s national and state capitals on Wednesday, which they have labeled a “takeover.”

The fuse for the protests was a tax overhaul proposed in late April by Mr. Duque, which many Colombians felt would have made getting by in an economy squeezed by the pandemic even harder.

But the outpouring quickly morphed into a widespread expression of anger over poverty and inequality — which have risen as the virus has spread — and over the violence with which the police have confronted the movement.

Students, teachers, health workers, farmers, Indigenous communities and many others have come together in the streets.

“People are fed up,” said Sergio Romero, 23, at a recent protest in Bogotá.

Demonstrators’ demands began with a repeal of the tax proposal. But they have grown over time to include calls for the conservative government to guarantee a minimum income, to prevent police violence and to withdraw a health care overhaul that critics say does not do enough to fix systemic problems.

So far, demonstrators have managed to topple both the tax proposal and the health plan. And Mr. Duque has rolled out several programs intended to help struggling families, including one that will partially subsidize salaries for employers who hire young people.

Mr. Duque’s popularity had dropped before the pandemic, and is now near its lowest point since his election in 2018, according to the polling firm Invamer. 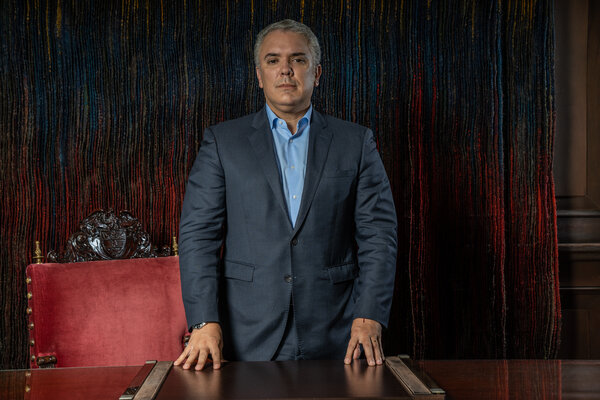 What first triggered the protests?

In late April, Mr. Duque, a conservative, became among the first leaders in Latin America to try to address an economic shortfall created in part by a pandemic that has ravaged populations and economies in the region.

His tax plan sought to keep in place new subsidies for poor people, while raising taxes on many everyday goods and services. Many economists said that some kind of fiscal restructuring was necessary, but many Colombians viewed the plan as an attack on their already difficult existences.

Even before the pandemic, many Colombians with full-time jobs struggled to make even the minimum wage of about $275 a month.

Helena Osorio, 24, for example, is a nurse who works nights and earns $13 per shift caring for Covid patients, barely enough for her and her younger brother to survive. This pushed her to attend recent protests.

The president’s tax proposal also came as coronavirus cases and deaths were rising in the country, leaving hundreds of desperate Colombians to wait for a bed at overloaded hospitals even as the vaccination campaign rollout has been slow.

What else are Colombians angry about?

The tax proposal was a catalyst that brought longstanding frustrations to a boil.

Colombia is among the most unequal countries in the world. A report from the Organization for Economic Cooperation and Development in 2018 said that it would take 11 generations for a poor Colombian to approach the mean income in his or her society — the highest number of 30 countries examined.

Despite reductions in poverty in the decades before the pandemic, many Colombians, particularly the young, feel the engines of upward mobility are beyond their reach.

Many Colombians are also frustrated by the government’s implementation of its side of the peace agreement with the country’s largest rebel group, the FARC, or Revolutionary Armed Forces of Colombia.

The deal, signed in 2016, was supposed to end generations of armed conflict. The rebels would lay down arms, and the government, among other commitments, would bring economic opportunity to rural areas that had suffered during the war.

But Mr. Duque’s party strongly opposed the deal, saying it went too easy on the FARC. His critics say he has not been aggressive enough in setting up the programs that were supposed to help cement peace, including one that would help coca-growing families switch to other crops. And violence continues in many rural areas, fueling frustration.

As the protests have escalated, resulting in clashes between demonstrators and police, Mr. Duque’s government has frequently blamed the violence on armed groups it says have infiltrated the protests.

What has the police’s response to the protests been?

The country’s national police force, one of few in the Americas that sits under the defense ministry, has responded with force, sometimes firing bullets at peaceful protesters, according to New York Times interviews with witnesses. This has exacerbated anger.

At least 43 people are dead, as of May 24, according to Colombia’s Defensoría del Pueblo, a government agency that tracks alleged human rights violations. But Human Rights Watch and other organizations say that the death toll is likely higher.

Hundreds of people have been reported missing amid the protests, and the national prosecutor’s office said on May 24 that authorities were searching for 129 of them.

In an interview, Mr. Duque recognized that some officers had been violent, but attributed the violence to a few bad actors, saying major change in the police force was not needed.

“There have been acts of abuse of force,” he said. But “just saying that there could be any possibility that the Colombian police will be seen as a systematic abuser of human rights — well, that will be not only unfair, unjust, but without any base, any ground.”

What about the protesters, have they engaged in violence as well?

Protesters have also blocked major roads, preventing food and other essential goods from getting through. Officials say this has hampered efforts to fight the coronavirus at a time when new cases and virus deaths are at near record highs.

The defense department says that hundreds of officers have been hurt, and one has been killed, while people associated with the protests have vandalized police stations and buses.

While tens of thousands have marched in the streets, not everyone supports the protests.

Jhon Henry Morales, 51, a taxi driver in Cali, said his city had been nearly paralyzed in recent days, with some protesters blocking the roads with tires.

He had not been able to work, he said, putting him behind on his bills. “Protest is legal,” he said. But, he said, “I also have rights as a Colombian citizen.”

Reporting was contributed by Sofía Villamil and Steven Grattan in Bogotá.