Over the last two weeks, a Staten Island man named James received an unexpected FedEx delivery. Then a certified letter. His phone rang constantly with calls from people on the 13th floor of Police Headquarters in Lower Manhattan. A taxi was parked outside his home, waiting for him.

James did not open the FedEx, the mail or the taxi door.

No matter the entreaties, James said, he was not going to testify at the disciplinary trial of Police Officer Daniel Pantaleo, who is accused of recklessly using a chokehold that led to the death of Eric Garner. One of the most important witnesses to Mr. Garner’s death, James, who had twice given his account under oath in earlier proceedings, said this latest one trivialized the killing of a man. In fear of police retaliation, he said, he does not want his last name published.

The unanswered calls, the unopened letters, might well stand for the dwindling urgency of coming to grips with a police encounter and a death that not long ago had galvanized the country.

Mr. Garner’s final moments, calling out, “I can’t breathe” 11 times, were captured on videotape nearly five years ago and helped propel the Black Lives Matter movement. Mr. Garner, who was being arrested on suspicion of selling loosies, or single untaxed cigarettes, had objected to being handcuffed.

What seemed to be a landmark case, a moment of reckoning for how the police treat people in poor and minority neighborhoods, appears to be petering out with an administrative hearing that carries neither criminal penalties nor the burden of understanding how a man who posed no obvious physical threat to anyone could end up dead over the sale of cigarettes.

Still, some clues to what happened in July 2014 have emerged at the hearing. In addition to Mr. Garner’s unforgettable words anticipating his death, another statement was made that day, and it became public for the first time on Thursday.

Moments after learning that Mr. Garner had no pulse and was likely to die, a police lieutenant sent a text message, writing, “Not a big deal. We were effecting a lawful arrest.”

The lieutenant’s union representative said he was not being callous about the death, but was trying to reassure subordinate officers who were upset. They were doing the jobs that their department and society wanted.

That assurance by the police commander on July 17, 2014, has, so far, turned out to be as prophetic as Mr. Garner’s last words that same afternoon.

The disciplinary hearing is the first public airing, and could be the last, of the circumstances of Mr. Garner’s death beyond the viral video. 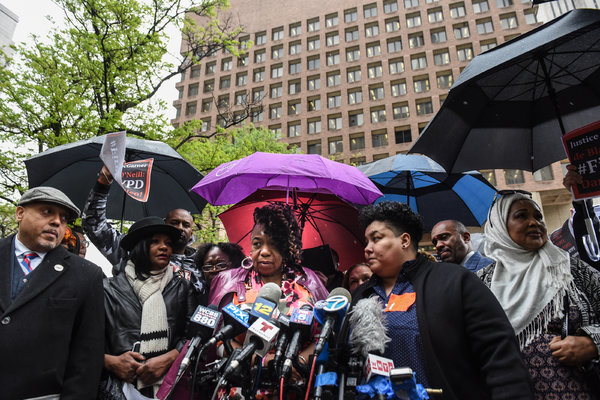 While the police trial is weighing whether the actions of Officer Pantaleo and a sergeant violated departmental rules and warrant punishment, the issues are so narrowly tailored that none of the other dynamics that drove the fatal encounter — such as leadership, expectations placed on officers, police culture, race and community complaints — are under serious consideration.

The disciplinary hearing will not include testimony from James, believed to be one of the last people to speak with Mr. Garner other than the police. He has already testified in two secret grand jury proceedings, he said, and was exasperated that nothing had come of what appeared to him to be a misuse of power that anyone could see on the video.

When he was first approached about appearing at the disciplinary trial, James said he asked the investigators what consequences it might hold for the officer.

James spends most of his days on the streets around Tompkinsville Park on Staten Island, the same neighborhood where Mr. Garner died, making him vulnerable, he believes, to harassment by the police. “I’m a brother. I walk a thin line,” he said. “I try to stay on the right side.”

The hearing has revealed that a police supervisor recommended in 2015 that internal charges be filed over Mr. Garner’s death, but the department’s own disciplinary unit did not pursue them. The current proceeding was initiated by the Civilian Complaint Review Board, which operates independently of the Police Department. So the judge’s findings are not binding on the police commissioner, James P. O’Neill.

If the video of Mr. Garner’s death seemed unequivocal in meaning to many viewers, a halting uncertainty within law enforcement over the proper response to it has extended from the City of New York to the top of the United States Department of Justice, from the Obama to the Trump administrations.

Last year, civil rights prosecutors in Washington asked permission to seek indictments for use of excessive force, but they were opposed by other federal prosecutors, including a contingent from the Brooklyn office.

The dispute was presented for resolution to Rod J. Rosenstein, who was deputy attorney general at the time, but no decision has been announced. The statute of limitations on any federal crimes expires in July, the fifth anniversary of the police encounter with Mr. Garner.

James, 58, said he spoke at length with F.B.I. agents about the events, and then before a federal grand jury in Brooklyn.

“I was down,” he said. “For a while. Down for whatever it takes. I wanted to get justice.”

He also testified in front of a state grand jury on Staten Island that declined to indict any police officers in Mr. Garner’s death.

Mr. Garner, who was well over six feet tall, weighed 395 pounds and suffered from asthma and hypertension. Officer Pantaleo’s lawyers said it was Mr. Garner’s poor health that led to his death after he refused to comply with a lawful order. In fact, he died from an asthma attack, a city medical examiner testified at last week’s hearing — the last in a chain of medical calamities that the examiner said had been set in motion by a chokehold,

Autopsy photographs show hemorrhaging to four layers of muscle and tissue in Mr. Garner’s neck. These injuries, the medical examiner said, had been caused by the chokehold and compression, and led to the fatal siege of asthma.

Although chokeholds are not against the law, the police are forbidden by policy from using them in almost all circumstances. Even so, they continued to be occasionally employed by officers, and departmental punishment is rare and light, a review of records by The New York Times found.

Officer Pantaleo’s lawyers argued that he did not put Mr. Garner into a chokehold, and had instead used a technique called a “seatbelt” hold, a view they claim was buttressed by a doctor employed by the police department who said that there were no injuries to Mr. Garner’s trachea.

Not so, replied the disciplinary prosecutors; the police doctor, they say, did not review the actual autopsy. And that doctor was contradicted by a police supervisor and other internal affairs officers who testified that the video showed Officer Pantaleo using the chokehold.

The streets where Mr. Garner died are, today, an often raucous bazaar, featuring a regular parade of drug users who stroll past high school students waiting for Victory Boulevard buses, clients of a social services office and customers of fast-food restaurants, a laundromat, a coffee shop run by a commune and check-cashing services.

Some younger people in the neighborhood did not know about the death of Mr. Garner.

But Joseph Evans, 48, who said he was “10 feet away” from Mr. Garner as he died, believes the police have dialed back enforcement tactics.

“Someone is holding the reins in, because they did slow down,” said Mr. Evans, who is homeless and spends his days around Tompkinsville Park. “There’s people selling loosies and making a fortune, and no one is sweating them.”

Moments later, that lighter police touch described by Mr. Evans was on display just a few feet away, at the corner of Victory Boulevard and Bay Street.

A fight broke out — complete with slaps, punches and profanities bellowed above the din of wheezing buses — between a woman and a man she had accused of stealing her phone. Within minutes, four police vehicles arrived and eight officers emerged. They separated the combatants, leading one safely off the block.

No arrests were made. No force was used. “This is the worst corner on Staten Island to have a fight,” the woman who lost her phone said. “The police are all over here.”

After that ruckus, James, who was standing nearby, picked up a discussion about the recent hearing. For him, three words of the lieutenant’s text message nail the stakes of the disciplinary trial: no big deal.

“All he was going to lose is vacation time?” James said, repeating one possible outcome of the hearing. “I don’t give a hoot.” 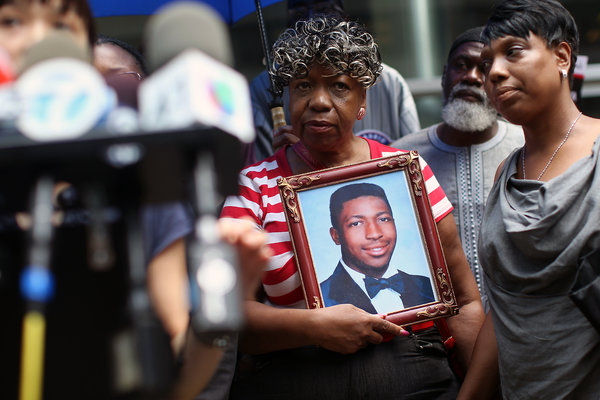 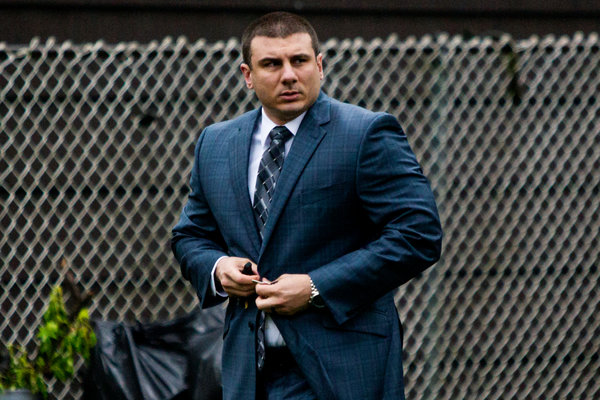 Jim Dwyer joined The Times in 2001. He was the winner of the 1995 Pulitzer Prize for commentary and a co-recipient of the 1992 Pulitzer for breaking news. He is also the author or co-author of six books. @jimdwyernyt