Home » Americas » Who is Adam Schiff, the lead prosecutor of Trump?

Who is Adam Schiff, the lead prosecutor of Trump? 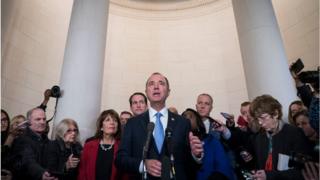 California Congressman Adam Schiff has been chosen to lead the prosecution in the Trump impeachment trial. Who is this veteran Democrat – extolled by colleagues, reviled by the president?

Described by those who know him as “a Boy Scout” with wry humour, Mr Schiff, 59, has kept a low profile over his nine previous terms in the US House of Representatives.

But as chairman of the House intelligence committee, the former prosecutor has become the face of the Democrats’ impeachment of President Donald Trump.

As lead impeachment manager, he will serve as a prosecutor for the House, making the case to oust the president in only the third US impeachment trial in history.

“I’m humbled by the solemn responsibility,” Mr Schiff said of his appointment. “The task before us is a grave but necessary one.”

Born in Massachusetts to a Democratic father and Republican mother, Mr Schiff grew up in California and later earned degrees at Stanford University and Harvard Law School.

In 1987, he joined the Los Angeles US Attorney’s office.

As a young prosecutor, Mr Schiff won praise for his work on a case that led to the first conviction of an FBI agent for espionage. The agent was discovered to have had an affair with a Soviet spy, giving her intelligence in exchange for money and sex.

It was punishing government misconduct in that case which inspired him to jump into politics, his father would later say.

From Hollywood Hills to Capitol Hill

Mr Schiff’s career in politics began with two failed campaigns for the California assembly, in 1991 and 1994, before he won a state senate seat in 1996 on his third attempt. Four years later, he unseated a Republican to become the US congressman for the California district stretching from Pasadena to the Hollywood Hills, now a reliably Democratic seat.

His defeated opponent, James Rogan, had become unpopular in part due to his fervent prosecution of Bill Clinton during the Democratic president’s Senate impeachment trial.

In 2008, Mr Schiff was appointed to the House intelligence committee, becoming chairman last year after Democrats won a majority in the House.

In March 2017, the House intelligence committee began looking into alleged Russian interference in the 2016 election and possible Russian links to the Trump campaign. At the time, the committee was led by Republicans.

Mr Schiff drew national attention – and the ire of the president – after speaking out in the media about the Russia investigation and what he viewed as attempts to discredit the inquiry.

Mr Schiff’s prominence grew after the disclosure last year of a whistleblower complaint alleging that the president had sought foreign interference into the US election. The congressman led the ensuing impeachment investigation, becoming a political star in the process.

‘Shifty Schiff’ or ‘the full package’?

His criticism of the president has turned Mr Schiff into a frequent target for Mr Trump, whose Twitter account is laced with mocking nicknames for the chairman, including ‘Liddle Adam’ and ‘Shifty Schiff’.

Nancy Pelosi, the Democratic House speaker, on the other hand, has lauded Mr Schiff as “the full package”. When she named the congressman and the other impeachment managers on 15 January, she noted they were chosen with an eye to their “on comfort level in the courtroom”.

“The emphasis is on making the strongest possible case to defend our Constitution,” she said – a nod to her confidence in Mr Schiff’s skills as a litigator.

Republicans have accused him of pursuing a vendetta against Mr Trump, and echo the president’s claims that he is corrupt. He is booed at Trump rallies and lampooned on Fox News.

An amateur screenwriter in his spare time- though his teleplays have so far failed to sell – Mr Schiff has said that he never imagined becoming a household name, although when he came up in a question on the gameshow Jeopardy! not a single contestant had heard of him.

Now, he is poised to step into the spotlight as he writes a chapter in America’s most riveting modern political drama.

US census counts its first person in rural Alaska