Home » Americas » Whistle-Blower? A Half-Century Ago in N.Y.C., It Was Serpico

Whistle-Blower? A Half-Century Ago in N.Y.C., It Was Serpico

Weather: A chance of light rain and fog before 7 a.m., then it will gradually become brighter, with a high in the upper 60s. Winds may gust as high as 34 m.p.h. The sun and pleasant temperatures will stick around over the weekend. 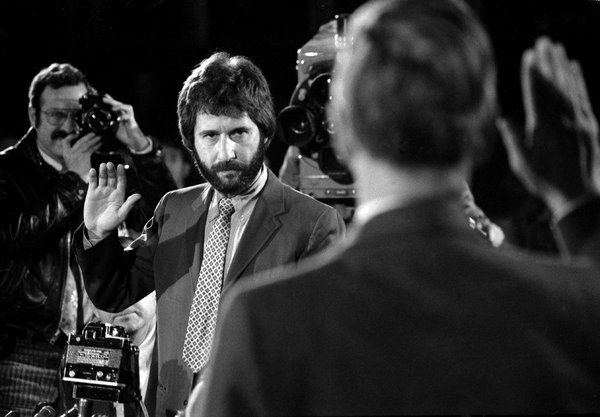 In the early 1970s, a police officer named Frank Serpico became New York City’s best-known whistle-blower by speaking up against widespread corruption in the Police Department.

A best-selling book and his portrayal by Al Pacino in the 1973 film “Serpico” helped make his name synonymous with facing down wrongdoing.

For decades, Mr. Serpico, 83, has lived in a secluded cabin in the woods north of the city. But when whistle-blowers make the news, he inevitably gets requests for interviews.

So Mr. Serpico chuckled over the phone this week when asked about the whistle-blower who has created a political firestorm by coming forward on White House activity regarding a call to the president of Ukraine.

The scenario in Washington is “so parallel to my situation,” he said, adding that it did not surprise him to see disparagement of the whistle-blower by President Trump and some other Republicans.

“This is what happens,” he said. “They want to discredit what you are saying, so they try to bring you down and turn you into a criminal. They tried to undermine my credibility, and now the president is doing the same thing.”

Mr. Serpico, who was profiled in a 2017 documentary and in another film this year, is a Brooklyn native who joined the Police Department in 1959 and grew increasingly disillusioned by the number of officers “on the pad,” or accepting bribes and payoffs from criminals, bookies and the like.

“It wasn’t about just taking a freebie,” he said. “It was cops doing the same thing that they were locking people up for.”

He steadfastly refused to take such money, he said, and in 1967 began complaining to high-ranking officials at Police Headquarters and City Hall.

They took little action, and he became a pariah in the department, he said. He considered quitting and simply walking away from the issue, a familiar decision for many whistle-blowers he has spoken to.

“At some point, you have to decide, ‘If I go up against the system, I better be ready to put my life on the line,’” said Mr. Serpico, who wound up taking his story to a Times reporter, David Burnham.

Mr. Burnham wrote a front-page article that helped prompt the Knapp Commission hearings in 1971 on police corruption, which, with Mr. Serpico’s testimony, helped expose pervasive wrongdoing and sparked the biggest shake-up in the department’s history.

Speaking up had its price. Mr. Serpico’s police career ended in 1971 after he was shot in the face during a drug raid. He has long maintained that he got no backup from his colleagues because of his pariah status.

The shooting left him with permanent injuries, and he is still despised by some of his old colleagues as a snitch.

“To them, I’m no whistle-blower,” he said. “They still consider me a traitor.”

The whistle-blower label is not easily shaken, he said. Most people he meets still refer to his actions or thank him for his decision to speak out against police corruption.

“Every time there’s another whistle-blower in the news, people want to ask me about it,” he said.

If asked about politics, Mr. Serpico levels the criticism he once reserved for police corruption at the political division roiling the country.

“Why can’t the two parties come together for the good of the country?” he said. “All they care about is the good of themselves. If we can’t trust our authorities and we can’t stand up for justice, where are we as a country, as a people?”

A Manhattan man pleaded guilty to committing a hate crime by shoving a woman on the subway and hurling homophobic slurs at her. [QNS]

In 1984, there were plans for Donald Trump to have a “castle” on Madison Avenue. The hope was to surround it with an alligator-filled moat. [New York magazine]

Coming up this weekend

Join the Chinese-American illustrator and graphic novelist Sarula Bao for an artist talk at Wing On Wo. & Co. in Manhattan. 7 p.m. [Donation-based]

The writer Ben Robinson introduces the latest hero in the “Star Trek” book series at Barnes & Noble in Union Square in Manhattan. 7 p.m. [$32.61]

The Reel Sisters of the Diaspora Film Festival screen four short films at the Dwyer Cultural Center in Manhattan. 2:40 p.m. [$12]

Try a pickle on a stick or ice cream churned with dill and garnished with gherkins at Pickle Day on Orchard Street in Manhattan’s Lower East Side. 12 p.m.-5 p.m. [Free]

We’ve already mentioned above that two food festivals, EEEEEATSCON and Pickle Day, are happening this weekend, so we’d be remiss not to mention a third — our own New York Times Food Festival.

The inaugural festival will celebrate what it means to eat, drink and cook in the heart of the city. Most of the ticketed events — including dinners at some of New York’s best restaurants and talks with food experts — are sold out, but a free section of “The Park” at Bryant Park will feature the best of Smorgasburg, an outdoor bar and an artisanal marketplace.

Visit anytime from noon to 6 p.m. on Saturday and noon to 5 p.m. on Sunday. If you can’t make it, these cooking experts and Times journalists have you covered with a list of their favorite places to eat in the city.

I got off the R at Bay Ridge Avenue and switched to the B9 bus. I was on my way to meet friends at a free concert.

The bus driver was very friendly. He greeted every passenger with a hearty “Good evening” before they had a chance to say anything.

When we got to the corner of Colonial Road and Bay Ridge Avenue — 69th Street to earlier generations — the driver left the front doors, and yelled into the pizzeria on the corner.

“Can you heat me up a spinach roll?” he shouted.

The man at the counter cocked his head to indicate that he hadn’t heard the request. The driver repeated it. Then he asked a teenage boy who was just getting off the bus to deliver the message.

The counterman flashed a thumbs-up.

It seemed like a pretty accurate estimate. We were near the end of the line.

Corey Kilgannon is a Metro reporter covering news and human interest stories. He was also part of the team that won the 2009 Pulitzer Prize for Breaking News. @coreykilgannon • Facebook