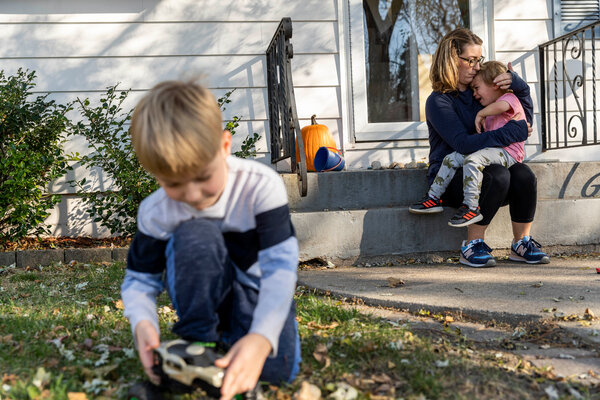 We mostly focus on students in this newsletter, but today we’re looking at the working moms who bear a disproportionate share of the remote-learning burden.

Across the country, and across the world, women have made enormous personal and professional sacrifices to help their children keep learning and their families stay afloat during the pandemic. That’s not new, but it bears repeating and further examination.

“When the pandemic hit, it was largely mothers who took on the additional child care duties; became remote teachers; and, in large numbers, quit their jobs,” our colleague Claire Cain Miller wrote.

This fall, there are about 1.6 million fewer mothers in the labor force than would be expected without school closures, according to an analysis of employment data. And a third of working women 25 to 44 years old who are unemployed pointed to child care demand as the reason, compared to only 12 percent of unemployed men, according to the Census Bureau.

That exodus of mothers from the work force is, in no small part, because of closed classrooms. Eight in 10 mothers said they managed remote schooling in their families, according to a survey in the spring.

“For millions of working women, the coronavirus pandemic has delivered a rare and ruinous one-two-three punch,” our colleague Patricia Cohen wrote.

The economic effects of the pandemic hit sectors where women make up a majority of the work force, like restaurants, retail and health care. Then came cuts in government jobs, where women are overrepresented. And finally, the knockout blow of remote learning.

Compared with their fathers and grandfathers, this generation of men is much more involved at home. Still, mothers are much more likely than fathers to make a professional sacrifice, research suggests.

“Other countries have social safety nets; the U.S. has women,” Jessica Calarco, a sociologist at Indiana University, told the journalist Anne Helen Petersen in a recent interview for her excellent newsletter, Culture Study.

The pandemic has also exposed other inequities, as the burdens of the pandemic-induced recession have fallen most heavily on low-income and minority women and single mothers.

“The sudden return to 1950s-style households wasn’t an aberration,” Claire wrote. “Rather, it revealed a truth: In the United States, mothers remain the fallback plan.”

During the season, the entire N.B.A. quarantined itself at Walt Disney World in Orlando, Fla. It cost a great deal of money and raised eyebrows across the country, as food bank lines grew and Americans struggled to get tests.

Now, the men’s college basketball tournament will attempt its own version of a closed system. Officials hope that limiting travel will reduce the risk of players, coaches and staff getting infected.

The location of the tournament bubble will perhaps be Indianapolis, which may pose difficulties: Over the last seven days, Indiana’s health department has reported a 12 percent positivity rate for virus tests.

Cash-strapped universities may sell dorms to real estate developers to make up budget shortfalls during the pandemic.

The trend predates the pandemic. Yeshiva University, in New York, started selling off student housing after its endowment shrank by $90 million in 2015. A developer flipped the dorms, selling the building for almost double the purchase price.

The latest on how the pandemic is reshaping education.