Home » Americas » When a Bus Driver Told a Rider to Wear a Mask, ‘He Knocked Me Out Cold’

When a Bus Driver Told a Rider to Wear a Mask, ‘He Knocked Me Out Cold’

More than 170 New York City transit workers have been harassed or assaulted for asking passengers to wear masks. 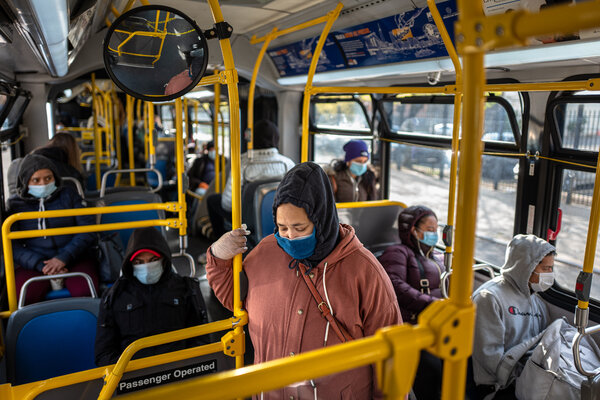 Anthony Reid barely remembers the blow that knocked him out.

A 62-year-old public bus driver in New York, Mr. Reid was on his last run in East New York, Brooklyn, when passengers complained that a man in the back was not wearing a face covering. Mr. Reid pulled over and called out to the man, reminding him that masks were required on public transportation.

Then everything went dark.

He woke up in the back of an ambulance, his left eye swollen shut and the taste of warm blood in his mouth. The maskless passenger had attacked him from behind, the paramedics told him.

“It was a calm exchange with him, but then he just knocked me out cold,” said Mr. Reid, who is still recovering from his eye injury he suffered on that July night.

As cities emerge from lockdowns and people return to public spaces, the new cultural wars over wearing a mask — or refusing to — have sparked confrontations in retail stores, parks and restaurants.

But in New York, where mask compliance has been generally high in most indoor settings, many of these confrontations are playing out on buses, where dozens of drivers have been attacked after trying to enforce the rules.

The frequent attacks have become so alarming that transit officials are now imposing $50 fines on riders who fail to wear masks on buses and subways in an effort to crack down on uncooperative passengers and make workers safer.

“This is a last resort for those very few people who refuse to wear a mask when offered,” said Sarah Feinberg, interim president of New York City Transit, which runs the city’s subway and buses.

Since mid-April, when Gov. Andrew M. Cuomo mandated that people wear masks on public transportation, there have been at least 177 instances of transit workers being harassed or assaulted by riders who refuse to wear face coverings or follow social-distancing protocols. Of those incidents, 95 percent occurred on buses, according to the transit agency. At least two people have been charged with assaulting transit workers in coronavirus-related confrontations.

Even before the pandemic swept across New York, bus drivers were already particularly vulnerable to assault: The Police Department does not have a unit dedicated to patrolling the bus network, and unlike their counterparts in the subway, drivers come into direct contact with passengers who may be agitated or mentally ill.