Home » Americas » What we know about latest US mass shootings

What we know about latest US mass shootings 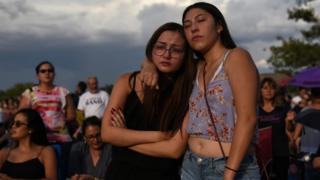 In distant parts of the country, just 13 hours apart, two mass shootings rocked the US over the weekend.

The first, a massacre in the Texan border-city of El Paso, left 22 people dead. Nine people were later killed in a shooting in Dayton, Ohio.

Here’s what we know about the attacks.

Police in El Paso, a large city on the Mexico-US border, first received reports of gunshots at 10:39 local time (16:39 GMT) on Saturday.

A gunman had opened fire with an assault-style rifle in a crowded Walmart on the city’s east side. Nearby businesses were placed on lockdown and shoppers were evacuated.

The store is near a retail park, the Cielo Vista Mall, which is popular with El Paso residents as well as shoppers from just across the Mexican border.

In addition to the 22 fatalities, 24 people were injured in the shooting. Eight Mexican nationals were among the dead and the victims’ ages range from 15 to 90.

Officers arrived on the scene within six minutes and the attacker surrendered after he was confronted by police outside the store.

Security camera images from inside the Walmart show an armed man in a dark T-shirt wearing glasses and what appear to be ear protectors. He has been named by US media as Patrick Crusius, a resident of the city of Allen, in the Dallas area, which is about 650 miles (1,046km) east of El Paso.

He purchased the weapon legally, police say, and was able to carry it into the Walmart because of the state’s “open carry” laws.

The 21-year old has been charged with capital murder, meaning he could face the death penalty. 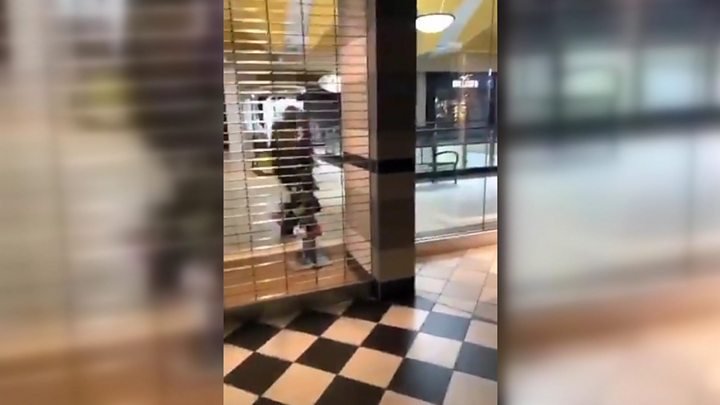 He is believed to be the author of a text posted on 8chan, an online message board frequently used by the far right, which says “this attack is a response to the Hispanic invasion of Texas” and rails against a “cultural and ethnic replacement brought on by invasion”.

The vast majority of El Paso’s 680,000 residents identify as Hispanic or Latino.

The four-page document, reportedly posted some 20 minutes before police received the first emergency call from the Walmart, also expresses support for the gunman who killed 51 people in Christchurch, New Zealand, in March.

The US Attorney for the Western District of Texas, John Bash, said prosecutors were considering bringing hate crime charges against the gunman.

Security camera footage shows dozens of people racing through the doorway of the local Ned Peppers nightclub on E 5th Street. Nine people were killed and 27 were injured.

Just seconds later, the gunman is seen running towards the venue and being hit by police gunfire as he reaches the door. Police have confirmed they killed the gunman at the scene within 30 seconds of him opening fire. 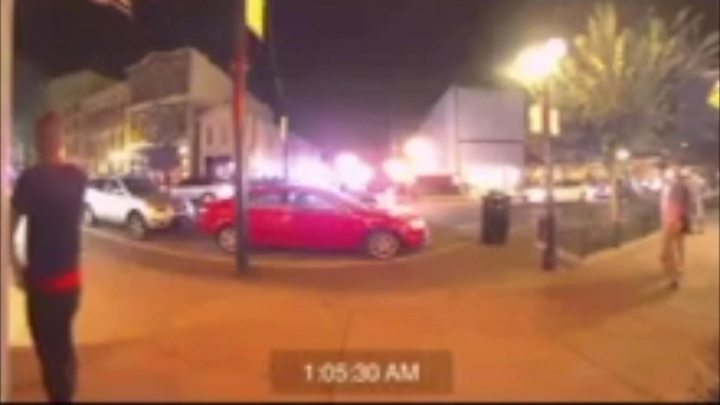 Had the gunman made it through the door, Dayton Police Chief Richard Biehl said, the loss of life would have been “catastrophic”.

The suspect, 24-year-old Connor Betts, used a .223-calibre assault rifle with high-capacity magazines that he had ordered legally from Texas. There was nothing in his history that would have stopped him from buying the gun legally, police said.

He was wearing a mask, body armour and had additional ammunition with him, law enforcement officials said. A second weapon, which the suspect left in his vehicle, was bought locally.

He fired dozens of rounds in the attack. His 22-year-old sister, Megan, was among those killed.

CCTV footage obtained by CNN showed Betts, Megan Betts and another man, Charles Beard entering a nearby bar a little after 23:00.

Betts is seen leaving about an hour later, with Mr Beard and Megan Betts exiting at 12:59. It is not clear what Betts did after leaving the bar but minutes later his sister was dead and Mr Beard was wounded.

Police have searched his house and his motives remain unclear. When responding to questions about a possible racial element to the killings, Mr Biehl said there was nothing to suggest a “bias motive”.