US police shot man as he woke in his car 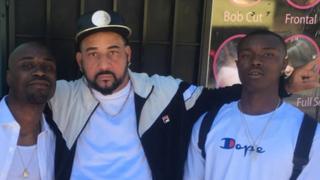 California police have said a 20-year-old black man who was shot and killed in his car by six officers last week had reached for a gun first.

But Willie McCoy’s family has pushed back, saying the aspiring rapper was not a threat to the officers as he was just waking up.

Vallejo police had been called for a wellness check when a driver was spotted slumped over in his vehicle.

The man was pronounced dead at the scene on 9 February.

“Any loss of life is a tragedy,” police chief Andrew Bidou said in an updated report of the incident on Tuesday.

The police report does not name Mr McCoy as the driver, citing the ongoing investigation, but local media identified him after speaking with family members.

Vallejo is a city near San Francisco that has been the site of several alleged cases of police brutality against black residents.

What do Vallejo police say?

According to the police department, officers received a call from employees at a Taco Bell fast food restaurant on Saturday night, requesting a check-up on a driver in the parking lot.

When they arrived on scene, they saw Mr McCoy unresponsive in his vehicle with a semi-automatic handgun on his lap. More officers were called while Mr McCoy slept.

Police had planned on opening the car door and retrieving the weapon before engaging Mr McCoy, but were unable to do so as the doors were locked.

Mr McCoy then woke up and looked at the officers, who commanded him to keep his hands visible. Police then say he did not comply and “quickly moved his hands downward for the firearm”.

“Fearing for their safety, six officers fired their duty weapons at the driver,” the news release stated. Multiple rounds were fired in a span of four seconds.

“Officers continued to yell commands at the driver and ultimately reached through the broken glass of the driver’s window to unlock the vehicle.”

Police attempted medical assistance but the driver died at the scene. An official post-mortem examination is still under way.

The officers have not been named and have been placed on administrative leave for the duration of the investigation.

What does the family say?

During a vigil on Sunday, Mr McCoy’s older brother Mark said police had surprised Mr McCoy and fired too quickly.

“My little brother was just shot for no reason,” he said, according to CBS News.

“If I wake you up… if I knock on your front door and, ‘Bang bang bang!’ you’re going to jump off the bed,” he said. “Why wouldn’t you be safe while you wake him up and then [say] ‘Driver, exit the car’?”

David Harrison, Mr McCoy’s cousin, told the Los Angeles Times on Monday that Mr McCoy was raised by relatives after his parents passed away when he was a child.

He said his cousin had finished up a session in a recording studio before he drove to the Taco Bell.

In an emotional Facebook video, Mr Harrison pleaded with other young people to listen to their parents and keep away from cops.

“I want no other parents, no other kid’s parents, to go through this ever again,” Mr Harrison said. “They can’t just keep killing us in the street like this. My little cousin was asleep in the car.”

Mr McCoy’s family has hired civil rights attorney John Burris – who recently took on a case where a homeless man sleeping in Oakland was killed by police – to represent them, the San Francisco Chronicle reported.