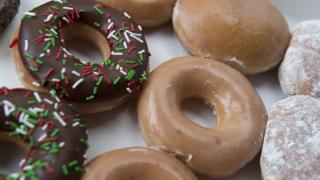 Police in Kentucky have posted a tweet mourning the loss of a doughnut truck, which was destroyed after catching fire.

The driver of the Krispy Kreme Doughnuts vehicle noticed smoke billowing from the back as he drove through Lexington.

While no one was hurt in the fire, all the doughnuts in the back were reportedly destroyed.

It proved too much to bear for the local police.

Lexington Police Department posted images online of heartbroken officers at the scene of the fire in the south-east of the city, near the corner of Man O’ War Boulevard and Pink Pigeon Parkway.

Fire crews managed to put out the fire. Its cause is not yet known.

Police departments around the country were quick to send messages of support to their colleagues.

In this line of work, some things can't be unseen. ????
My thoughts are with @lexkypolice officers in this time of tragedy. ??

US delays American diplomats' return to China amid concerns over coronavirus testing, quarantine

Amazon, Apple, Facebook, Google CEOs to testify in US Congress over antitrust issues

At least 100 dead in landslide at Myanmar jade mine: Officials