Home » Americas » US election 2020: Undecided voters like Joan could swing this election, but they could leave America more divided

Blue tarpaulin sheets covering the roofs of thousands of homes flap in the warm Louisiana wind as workmen clear away broken tiles and window frames.

It’s over two months since Hurricane Laura ripped through the town of Lake Charles bringing death, destruction and misery that continues today.

This really has not been a good year for the residents of this town known for its oil and casinos.

It has been flattened not once but twice by severe hurricanes this season – and the season is not over yet. 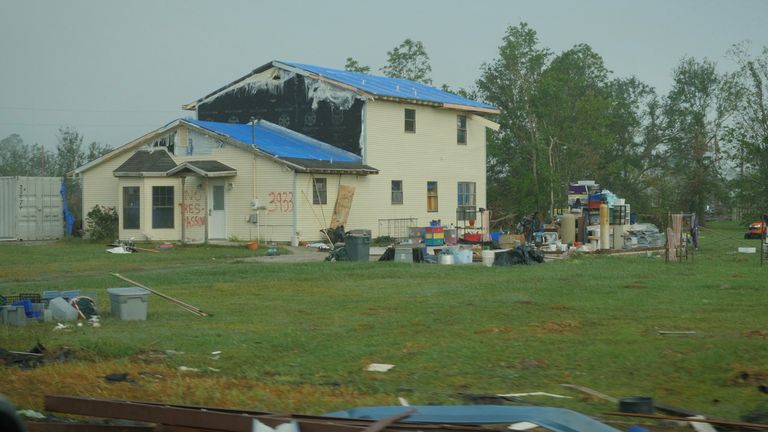 In the midst of all this the town was engulfed by COVID-19, infecting people and destroying much of the local economy.

Outside the motorhome she now lives in, while she waits for her home to be rebuilt, Joan Arbie shows me her outdoor kitchen, while surveying the destruction that’s affected the homes of all her neighbours.

“We are grateful for what we have left,” she tells me.

What has happened to Joan is typical of many people in Lake Charles.

Her partner, Bridget, contracted COVID-19, their home was destroyed in the hurricanes, she has lost her job and is waiting for the insurance to come through so that she isn’t flat broke and can afford the house rebuild.

The thing is Joan is very much not typical to most in this town and indeed across the United States, in one crucial and interesting way.

She is an undecided voter.

If the 2020 United States presidential election has one overriding characteristic, it’s that almost everyone has already decided who they will vote for.

Donald Trump has ensured that there is barely a person in the land who does not either love him or hate him. There doesn’t seem to be much middle ground. Which brings us back to undecided Joan.

What struck me is that Joan’s indecision really weighs upon her mind.

She sees the election as vitally important, a defining moment even, in the country’s political and social evolution.

“I’m kind of on the fence between being conservative and liberal, but I think some of the things that are being said on the liberal side are more disturbing to me than on the conservative side, so that’s kind of where I am having to make a decision as to who I am going to vote for, and it’s a very difficult decision, and like I said it’s kind of a scary one as well.”

The truth is Joan, like thousands if not millions of Americans, isn’t too keen on either of the candidates running for the highest office.

A 56-year-old former university athletics coach, with two teenage daughters, lots of friends in the United Kingdom and a love of driving holidays is naturally of a liberal disposition.

But clearly the Democrats in this election appear to be spooking her more than Trump’s often divisive actions and words.

“Well I kind of have a feeling who I am going to vote for at this point, but still it just tears at you, you know, what side you’re going to go to, because it’s just so much uncertainty. I mean someone who hasn’t been in office they can tell you they’re going to give you the moon but are they capable of that?”

She then pauses to think. Her dilemma is that she’s not sure about President Trump either.

“I think with Donald Trump – his debates didn’t go so well he seemed a little you know, a little too aggressive in my opinion in those debates… it’s been a very difficult decision and it’s actually been really stressful.”

We join Joan on the final day of early voting in Lake Charles as she drives downtown to vote, still undecided. 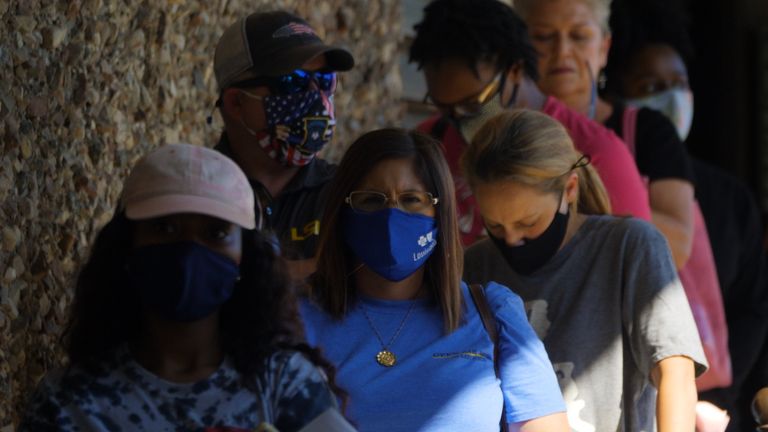 Before she gets in the queue I ask her what, for her, is the one crucial issue in this election that she wants to see followed.

“Freedom, freedom, and what happens in the future for my children, that’s the defining issue for me.”

Lake Charles, like cities across the country, have seen record numbers of people turning out to vote before election day.

An election official here tells me that 40% of eligible voters had already done so.

She predicted that after election day more than 80% will have voted.

What it actually means for the two candidates is being discussed by observers and TV commentators here on an almost continuous basis.

Whatever the polls say, in truth, nobody really knows what is going to happen.

But people like Joan could be the ones who swing this one way or the other.

After an hour or so in line this clearly jubilant, now decided, voter emerged punching the air.

“I have been quite nervous, a little scared about it, and I feel a lot better now I am done, now I have cast my vote, and know that I’ve been heard. My one vote may not make a huge difference, but it may make some difference.”

I ask her if she’d tell us who she voted for.

“No, I’m not telling you who I voted for, it may ruin some friendships, so I can’t tell you.”

Her fear of upsetting close family and friends is reflected across the United States, a country now arguably more divided than ever before.

The key question is this – will the final result unite them or make things even worse?