In State of the Union address, US president calls for bipartisan cooperation and pledges to withdraw US troops. 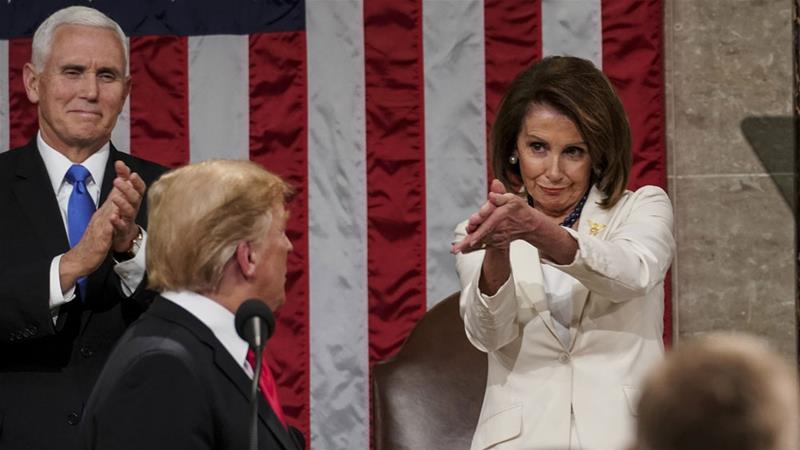 Washington, DC – In his annual State of the Union address, President Donald Trump issued a call for unity and bipartisan cooperation to a Congress in the United States deeply divided over issues confronting the nation from immigration to wars in the Middle East.

“We must reject the politics of revenge, resistance, and retribution – and embrace the boundless potential of cooperation, compromise and the common good,” Trump said.

“We must choose between greatness or gridlock, results of resistance, vision or vengeance, incredible progress or pointless destruction,” Trump said, bluntly warning House Democrats not to pursue what he called “ridiculous partisan investigations”.

It is an appeal that in reality is unlikely to win much support in Congress where partisan tensions are already high. Democrats showed little enthusiasm for Trump’s key political points during the speech, which drew applause largely from Republicans only.

For the first time in his presidency, Trump has to contend with an opposition Democrat majority in the House of Representatives under Speaker Nancy Pelosi that plans to investigate more than cooperate with this president.

After losing a political fight with Democrats in the longest government shutdown in US history, Trump has threatened to declare a national emergency if he does not receive more than $5bn in funding from Congress to build a wall on the southwest US border with Mexico.

Trump used the nationally televised speech to again make his case for the wall, albeit with exaggerations and demagoguery.

Trump sought to rally members of Congress around shared patriotism with tributes to American soldiers who liberated Europe in World War II. But the president articulated what he called a realist view of US foreign policy that many Americans and US allies fear is drawing the nation away from the alliances that have sustained peace.

“One of the most complex set[s] of challenges we face is in the Middle East,” Trump said. “Our approach is based on principled realism, not discredited theories that have failed for decades to yield progress,” the president said.

Opposition to the president was visible. More than 70 Democrat women members of the House wore white in honour of the women’s suffrage movement that led to the 19th Amendment giving women the right to vote and sending a signal of unity in resistance to Trump’s agenda. Trump won applause noting that more women were working in the US economy than ever before.

Trump pledged “to pursue a foreign policy that puts America’s interests first”. He has withdrawn the US from the Intermediate Nuclear Forces Treaty with Russia and has sought to reimpose economic sanctions on Iran after withdrawing from a United Nations agreement preventing Iranian development of nuclear weapons.

At the same time, Trump announced he would meet North Korea leader Kim Jung Un in Vietnam on February 27-28 to continue negotiations for peace on the Korean Peninsula and a reduction in nuclear weapons.

And he promised to end US wars in Syria and Afghanistan, although he did not lay out any timetable. He did not mention Yemen.

“Now, as we work with our allies to destroy the remnants of ISIS, it is time to give our brave warriors in Syria warm welcome home,” Trump said, referring to the Islamic State of Iraq and the Levant (ISIL) group. “I have also accelerated our negotiations to reach – if possible – a political settlement in Afghanistan.”

Democrats made clear they weren’t buying the president’s rhetoric. “Every year the president wakes up and discovers that the desire for bipartisanship and unity is ephemeral. He doesn’t really feel it,” Senator Chuck Schumer, the top Democrat in the Senate, told reporters before the speech.

“On foreign policy, we seem to chastise, criticise and even humiliate our allies and embrace our enemies such as Russia, China and North Korea,” Schumer said.

“There is no logical, rational reason [why] that by 2020 Americans should be fighting and dying in Afghanistan,” said Aaron David Miller, a Middle East policy analyst at the Wilson Center in Washington, who is nearly alone among foreign policy analysts in Washington who believe Trump is making the right call in pulling out.

“Yes, being there on the ground gives us probably a better opportunity to disrupt these cells but we can also do it using all sort of over-the-horizon techniques. You don’t need 14,000 forces. And you cannot accomplish any of our goals,” Miller told Al Jazeera.

Trump had announced on December 19 he was withdrawing 2,000 US forces from Syria and claimed ISIL had been “defeated”. He later backtracked on the decision amid an outcry in Congress. US intelligence chiefs told a Senate hearing January 29 that ISIL and al-Qaeda remained threats to US interests.

Earlier in the day, the US Senate approved legislation by a 77-23 vote calling on Trump to slow down and reassess plans to withdraw US forces in Afghanistan and Syria. The Senate bill calls on Trump to conduct a strategic policy review and consult US allies and partners in the region before drawing US troops down in Afghanistan by half from 14,000.

“The establishment of Washington is pushing back against his instinct to pull out, something he has promised his constituency. It will be interesting to see how he handles it,” Shibley Telhami, a pollster and professor at the University of Maryland, told Al Jazeera.

“He is surrounded by people who are much more hardline on this and they are in a position to kind of manipulate him a little bit. They have bought themselves time because he wanted to pull out immediately,” Telhami said.

“What these guys did, his advisers and the lobbyists all pushed him to delay this a little bit. And he agreed with it. And he said, ‘I am just giving them a little more time but I am still going to pull out’. And what that did, was give the Senate hardliners time to mobilise and pushback,” Telhami said.

Looming over the domestic political outlook for Trump is the pending conclusion of the investigation by Special Counsel Robert Mueller into allegations of cooperation between Trump’s campaign and Russia during the 2016 presidential campaign.

A key question is whether Mueller will file a report to the Department of Justice or send a referral to Congress that could trigger subpoenas or impeachment proceedings in the House. Observers expect more court charges to be brought.

“We don’t know from the outside what Mueller is going to do. There are going to be more indictments before he’s done. There is the difficult question of what is actually going to be in a report, whether Mueller has found any evidence of criminality by the president,” Matt Miller, a former Justice Department spokesman in the Obama administration, told Al Jazeera.

“If Mueller decides the president has done something, he may make that information available to Congress in a referral. That would start impeachment proceedings in the House, hearings at least. If Justice tries to sit on the report, there would be subpoenas from Congress, which could hobble the president’s reelection campaign right up in to 2020,” Miller said.

Despite a growing economy and a low unemployment rate, Trump’s approval ratings in national polls are poor. Fifty-five percent of Americans disapprove of the job the president is doing, compared to 41 percent who do approve, according to a rolling average of surveys compiled by RealClearPolitics.com.

Trump promised to “protect American jobs” through a new trade arrangement with China and the renegotiated free trade agreement with Canada and Mexico. He called for affordable healthcare and reductions in pharmaceutical prices, issues that are important to the economic well-being of American voters.