Home » Americas » Trump angry at police leniency as statue of Albert Pike, who had alleged links to KKK, is toppled and burned

Trump angry at police leniency as statue of Albert Pike, who had alleged links to KKK, is toppled and burned

A statue of a Confederate general has been torn down and set on fire by protesters in Washington DC.

The monument to Albert Pike was toppled on Juneteenth, also known as Freedom Day, which marks the end of slavery in America.

Demonstrators wrapped ropes around the 11ft (3.4m) statue to pull it down from its granite pedestal in Judiciary Square, before dousing it in lighter fluid.

It was also sprayed with red paint before cheering demonstrators watched it burn, chanting: “No justice, no peace!” and “No racist police!”

Videos posted on social media show officers from the nearby Metropolitan Police Department headquarters arriving at the scene and carrying out a peaceful intervention.

They used fire extinguishers to put out the fire but avoided clashing with protesters. Their approach quickly prompted a critical tweet from Donald Trump.

The president criticised DC mayor Muriel Bowse, writing: “The DC police are not doing their job as they watched a statue be ripped down and burn. These people should be immediately arrested. A disgrace to our Country!”

Far from being perturbed by their president’s comment, jubilant protesters read out Mr Trump’s tweet over a megaphone.

After the statue fell, most protesters returned peacefully to Lafayette Park near the White House.

As a Confederate general and leader of the Freemasons, Albert Pike has long been a contentious figure in the US. 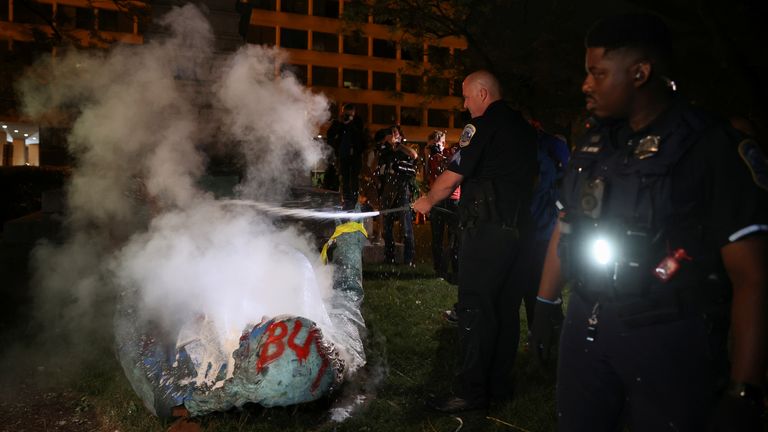 The statue was erected in 1901 at the request of the Masons.

Permission was granted on the condition Pike was depicted wearing civilian, not military, clothing.

Revered by the Masons, Pike’s body is interred at the DC headquarters of the Scottish Rite of Freemasonry.

Numerous statues have been toppled as the Black Lives Matter movement has spread across America and Europe following the killing of George Floyd in Minneapolis last month.

Floyd, 46, died after white police officer Derek Chauvin knelt on his neck for at least eight minutes while arresting him for allegedly using a counterfeit $20 note in a shop.

Chauvin has been charged with murder.

Civil rights activists and local government officials have campaigned for nearly 30 years to get Pike’s statue taken down but needed the federal government’s approval to do so.

The DC Council say they renewed calls for Congress to remove it in 2017.

A proposed resolution calling for the removal of the statue referred to Pike as a “chief founder of the post-Civil War Ku Klux Klan”.

The Klan connection is a frequent accusation from Pike’s critics and one which the Masons dispute, saying there is no definitive evidence proving his relationship with the organisation.

These Confederate statues were removed across 3 dozen states. But where did they go?