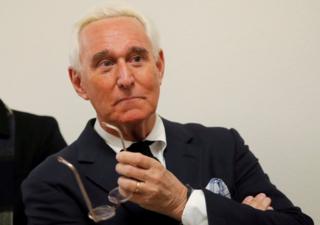 Political strategist Roger Stone, a long-time ally of President Trump, has been arrested in Florida, charged with seven counts in the Mueller probe.

Mr Stone will appear in court later in the city of Fort Lauderdale.

The indictment includes one count of obstruction of an official proceeding, five counts of false statements, and one count of witness-tampering.

The charges are linked to an alleged Russian-led hack into the emails of Democratic Party officials.

The information contained in the emails was released by WikiLeaks during the 2016 US election campaign.

Hillary Clinton’s 2016 campaign chairman John Podesta, who was targeted in the hack, accused self-described “dirty trickster” Mr Stone of knowing about it beforehand.

According to investigators, Mr Stone said he had “communicated” with WikiLeaks founder Julian Assange before the emails’ release and had described the contact as “perfectly legal”.

Mr Stone was detained in a pre-dawn arrest.

His campaign activities have long been under scrutiny by Special Counsel Robert Mueller, who is investigating allegations of collusion between Russia and the Trump campaign.

In 2016, US intelligence agencies concluded that Russia had tried to turn the election in Mr Trump’s favour through a state-authorised relay of cyber attacks and fake news stories planted on social media.

Mr Trump has branded the Mueller inquiry a political “witch-hunt”. The Kremlin has always denied meddling in the US election.

Mr Stone is the 34th person to be charged as part of the Mueller investigation. Those indicted include 12 Russian military officers and 13 Russian nationals accused of leading a campaign to interfere in the US election.

Another three Russian entities, including the notorious Internet Research Agency “troll farm”, have also been charged.

Several people connected directly with Mr Trump have been indicted, including his former national security adviser Michael Flynn, and Paul Manafort, the former chairman of his election campaign, who is in jail.

Who is Roger Stone?

A long-time friend of Donald Trump, Roger Stone has worked on Republican political campaigns since the 1970s.

He began his career working on Richard Nixon’s 1972 re-election bid, and has a tattoo of the 37th president across his shoulder blades.

Mr Stone published a book, The Making of the President 2016, after helping Mr Trump to power.