Ruth Bader Ginsburg was a child of Brooklyn long before she was Notorious — daughter of Jewish immigrants, graduate of P.S. 238 and James Madison High School (class of 1950), cheerleader known as Kiki Bader, member of the East Midwood Jewish Center.

She lived on the first floor of a two-story house on East Ninth Street in the multiethnic Midwood neighborhood and fed her mind at the local public library branch, upstairs from a Chinese restaurant and a beauty parlor.

“She’s part of the folklore of the community,” said Joseph Dorinson, who lives in the neighborhood and has taught at James Madison. “My neighbor’s brother dated her.”

Howard Teich, founding chairman of the Brooklyn Jewish Historical Initiative, said Justice Ginsburg resonated so profoundly with Brooklynites — the elders who followed her judicial career and the young people who loved the pop icon — because she represented the values of her block.

“It’s a place that lends itself to the values of modesty and people living with each other, and that has lasted her through her lifetime,” he said. As an emblem of pride, he added, “She’s singular in terms of who she was.”

Over the weekend, as news spread of Justice Ginsburg’s death on Friday, makeshift memorials of candles, signs, flowers and even an R.B.G. action figure went up outside James Madison High School and her childhood home. Hundreds gathered Saturday night outside the courthouse in Foley Square in Manhattan, holding candles and singing the civil rights anthem “Woke Up This Morning With My Mind Stayed on Freedom,” and a vigil was also held outside Kings County Supreme Court. Handwritten signs in different parts of Brooklyn urged neighbors to honor her legacy by voting.

“They’ve been coming and going all weekend to pay their respects,” said Diana Brenneisen, who has lived in the justice’s old house since 1969. “They’re outside now.”

Gov. Andrew M. Cuomo announced that the state would erect a statue in her honor in Brooklyn. It will be only the fifth statue Mr. Cuomo’s administration has created since he took office in 2011.

Over the weekend, state monuments were bathed in blue light, her favorite color.

At the Barclays Center in Brooklyn, the display board posted her imprecation: “Fight for the things that you care about, but do it in a way that will lead others to join you.”

As national politicians spent the weekend debating whether to fill her seat on the Supreme Court before Election Day, Mayor Bill de Blasio honored her as a native daughter, saying, “I’m crushed that we lost an incomparable icon. A daughter of Brooklyn. A tenacious spirit who moved this country forward in fairness, equality and morality. She was Ruth Bader Ginsburg. She never backed down from a fight. Tonight her hometown and world mourn.” Flags around the city flew at half-staff. 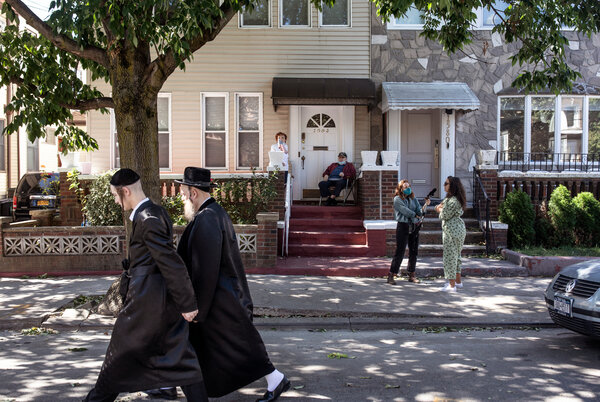 Representative Alexandria Ocasio-Cortez referenced the battle over Justice Ginsburg’s court replacement, saying, “It is heartbreaking that in her final moments she was, as are many others, preoccupied with what would happen after her passing.”

For others, the loss was personal. “Are you kidding me?” Paula Evans, a high school classmate of the justice who is now living in Florida, said when asked what she meant to the borough. “I’m looking at her face right now. She was a wonderful girl and lady, a real go-getter. That’s what we called them then. It’s a loss.”

In Prospect Lefferts Gardens, Becky Celestine, 24, said the death had made her feel “hopeless” yet determined to do something. When she heard the news, she said, “The first thing I did was sign up to be a poll worker.”

At a Friday night Rosh Hashana service conducted on Zoom at the justice’s old synagogue, the East Midwood Jewish Center, news of her death reached the group just as the congregants were about to log off. “I was choked up,” said Rabbi Cantor Sam Levine. “People were crying.”

The following day in his sermon, the rabbi read from an essay Ms. Ginsburg had written as a student at the synagogue’s Hebrew school in 1946, at age 13, arguing against complacency after World War II ended. “There can be a happy world and there will be once again, when men create a strong bond towards one another, a bond unbreakable by a studied prejudice or a passing circumstance,” he recited, quoting the future justice.

Reached by phone on Sunday, the rabbi called her the Hebrew school’s “most famous alumna” and said the congregation was still trying to process the loss. “Everyone’s reeling,” he said, “apart from the disgusting politics that have been wrapped up in her death. It’s a devastating loss.”

At her old high school, which has a student courtroom named for her, Nanci Richards, a teacher, said students responded most strongly to Justice Ginsburg’s perseverance — building her career while she had young children, continuing on the Supreme Court even as she fought cancer. “It really impressed them that she kept going through all her obstacles,” Ms. Richards said. “She kept going. And now that she’s no longer with us, we keep going.

“And the fact that she’s one of us, she’s a Brooklyn girl, from James Madison, that’s even sweeter.”

A Common Retort After Insensitive Remarks by Elected Leaders: Resign

US election 2020: Final debate is focused, respectful, but unlikely to change anyone’s mind