It was a tradition that went back years at Shallowater High School in northwest Texas. For one day, the senior boys dressed in suits and ties and the girls put on frocks and heels.

The boys addressed the girls as “milady,” held doors open for them and helped them to their seats in class or at lunch. The girls had to walk behind the boys and were forbidden to “complain or whine” or demonstrate any kind of “intellectual superiority.”

The rules were part of an assignment from an English teacher who for years had used it to show students in her class how women were treated as inferiors under the chivalric code of medieval times. But this year, the school in Shallowater, a town of about 2,500 people about 12 miles northwest of Lubbock, canceled the lesson amid parent complaints that asking girls to act subserviently to boys was the wrong way to teach them about sexism and history.

The cancellation comes as many schools are re-examining traditions that are now being recognized as outdated, sexist or racist. It also highlighted, according to students, how even well-meaning lesson plans can backfire.

“I really don’t think it was the teacher’s intention to have it be such a sexist lesson,” said Hannah Carreon, 18, a senior at the high school. “There were girls that were excited to get to do this finally and get to dress up.”

She added, “But there were also a lot who were obviously upset about it.”

School officials declined requests for an interview and the teacher did not respond to a request for comment.

In a statement, the school district superintendent, Anita Hebert, said the assignment had been removed and the “matter has been addressed with the teacher.”

“This assignment has been reviewed, and despite its historical context, it does not reflect our district and community values,” Dr. Hebert said.

The exercise had been scheduled to take place on Wednesday. Female and male students, who had been reading “Beowulf” and the works of Chaucer, were given assignment sheets that described 11 “rules for chivalry.” They would be awarded 10 points for every rule they followed.

Boys were asked to rise any time a female student or faculty member entered a room, to avoid profanity or “vulgar words” and to “allow ladies to leave the room before they leave.”

Girls had to walk behind men or “walk daintily, as if their feet were bound”; address men with “a lowered head and a curtsy”; “clean up” after their male classmates; and “obey any reasonable request” from a man.

According to Colin Tynes Lain, 18, a senior, the teacher had anticipated backlash and said students who were uncomfortable with the assignment could write a one-page essay instead.

In the past, Mr. Lain said, the teacher had given parents and teachers a written disclaimer explaining that the goal of the project was to show how the chivalric code was used to obscure chauvinistic principles that harmed women.

“That’s what she was trying to pull our attention to,” he said. “That this was not chivalry in any way.”

Still, he said, he felt unsettled by the idea of treating students he is used to debating and bantering with in a demeaning way.

“It definitely made me uncomfortable and I would say that was her goal,” Mr. Lain said. “At the same time, I understand why certain people would be mad.”

Ms. Carreon, who has an English class with the same teacher but not the course that included the chivalry assignment, said she most likely would have written the essay.

“It’s important to show how far women have come, but why do we have to act that out for us to understand it?” she said.

Jaiden Landers, another senior in the class, said there had always been some resistance to the assignment, but in recent weeks the debate had become more charged among students.

It was unclear how many parents complained, but the students said that at least one parent complained to the school board.

By Wednesday, most students knew the project had been canceled, Mr. Landers said.

By then, a picture of the assignment had been posted in a Facebook group created by parents and was circulated to another parent group, where Brandi D. Addison Davis, 23, a freelance journalist in the Dallas-Fort Worth area, saw it. 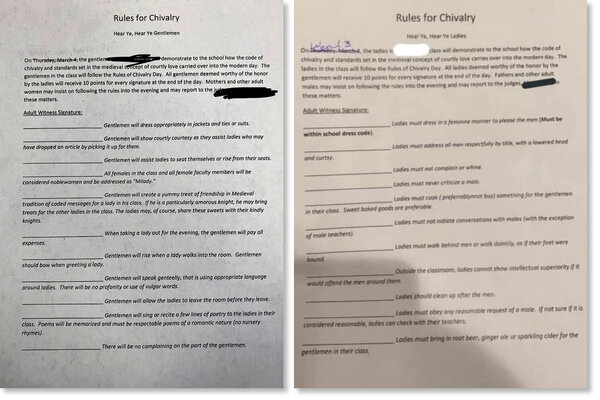 She posted a photo of the assignment sheet on Twitter, where it was seen and picked up by local and national media.

Role-playing can be an effective pedagogical tool, but teachers have to be very careful that they are not reinforcing negative gender and racial attitudes, said April Peters-Hawkins, a former sixth-grade teacher who is now a professor of school leadership at the University of Houston College of Education.

Mr. Landers said he hoped that the teacher, whom he described as caring and well liked, would find another way to have students examine the misogyny of that era beyond studying old texts.

“I feel like a lot of people are trying to cover up history; we shouldn’t do that,” he said. “If men, especially teenage boys, see how girls were treated back in the 1300s, they’ll get a better sense of how to treat women today.”