Weather: A rainy day, turning stormy in the evening. High in the mid-70s. 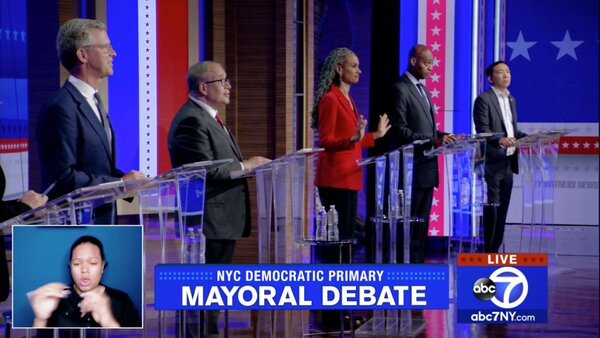 With less than three weeks until the primary election, the race for mayor of New York City has become increasingly heated.

That dynamic was on show last night, as the eight major Democratic candidates attacked one another in more personal terms during their first in-person debate.

The contenders jousted over several areas of concern for New Yorkers, with matters of crime, justice and policing dominating the night once again. Still, the face-to-face format was often more chaotic than substantive: Deep policy discussions were sometimes replaced by animated attacks.

[Read more about the standout moments and catch up on who the candidates are.]

Here are three things to know:

At one point, each of the eight candidates was given a chance to ask a question of an opponent.

Later, Andrew Yang, the former presidential candidate and another leading contender, landed the sharpest critique, pointing to the times in Mr. Adams’s career when he has been subject to investigation.

Mr. Adams defended his integrity and shot back at Mr. Yang’s lack of political experience in New York.

Kathryn Garcia stayed out of the fracas.

Ms. Garcia, the former sanitation commissioner, appears to have gained traction in the limited polling available. And leading up to the debate, she was the subject of attacks.

But as leading candidates faced pointed criticisms, Ms. Garcia largely flew under the radar. Her campaign framed the approach as a strategy of remaining “above the fray.”

When the candidates were prompted to ask another a question, no one directed one to Ms. Garcia. Only toward the end of the debate did Scott M. Stringer, the city comptroller, criticize Ms. Garcia for her role in Mayor Bill de Blasio’s administration.

Ms. Wiley, a former commentator on MSNBC, criticized her fellow candidates and ignored calls from the moderators to stay within the time limit.

Among her biggest moments were sparring matches with Mr. Adams, whom she attacked for his stance on public safety. She questioned why he once said that he would carry a gun if elected as mayor (he is a former police officer and allowed to do so).

Mr. Adams said there was a distinction between off-duty officers carrying guns and the proliferation of illegal weapons.

A 7-Year-Old Was Accused of Rape. Is Arresting Him the Answer?

The M.T.A. Is Breached by Hackers as Cyberattacks Surge

The Mystery of the $113 Million Deli

Summer is here and New York City is reopening. Stay up to date on the best things to do, see and eat this season. Take a look at our latest newsletter, and sign up here.

Many prospective tenants face illegal housing bias after seeking to pay through forms of public assistance. But staffing to field the complaints is low. [City Limits]

What New York might learn from another big city in its planned expansion of the street vendor system. [Curbed]