Home » Americas » She Led a Famed Progressive Church. Then She Said She Was Harassed.

She Led a Famed Progressive Church. Then She Said She Was Harassed.

When the Rev. Dr. Amy K. Butler was hired to lead Riverside Church in Manhattan in 2014, she was hailed as a rising star, the first woman to join a distinguished line of pastors at one of the pre-eminent progressive Protestant congregations in the United States.

Two years into her tenure, an influential former member of the church’s governing council left a bottle of wine and a T-shirt on her desk, both with labels that read “Sweet Bitch,” according to an internal investigation ordered by the church after Ms. Butler filed a formal complaint.

Ms. Butler, 49, went public about the incidents last year, writing a blog post titled “From #MeToo to #ChurchToo to #NeverAtChurch” that said exchanges between her and the former member of the governing council had left her “feeling deeply uncomfortable.”

This month, the governing council dismissed Ms. Butler by not renewing her contract, shocking the 1,750-member congregation and touching off a wrenching debate about sexism, harassment and hypocrisy in a church where past leaders had marched for civil rights with Martin Luther King Jr.

The discord reflected the tension between veteran members and a new wave of activism-oriented congregants drawn in by Ms. Butler.

Ms. Butler’s supporters said she lost her job because she had spoken up against harassment and pursued better treatment for women and minorities, with the aim of fixing a difficult environment that had led some church employees to complain and even quit. Her persistence strained an increasingly fractured relationship between her and the church’s lay leaders, her supporters said.

“There is absolutely no doubt that sexism played a role,” said the Rev. Kevin Wright, who had been recruited by Ms. Butler in 2015 and served as executive minister for programs before leaving last year. “I don’t understand how anyone could think anything different.”

But her opponents said her dismissal was being misconstrued, and pointed to the governing council’s significant misgivings about changes she made to the church staff and programming and spending priorities. Her philosophy and leadership style, they said, collided with a church whose culture remained deeply traditional, despite its politics.

Riverside Church is recognized for its soaring Gothic sanctuary in Morningside Heights, built in 1930 by John D. Rockefeller and styled after a cathedral in France. Yet it has gained wider prominence for its devotion to social justice causes.

The church has ministries that fight climate change, support immigrants seeking asylum in the United States and help former prisoners after incarceration. It has also issued many “faith-based proclamations,” including one declaring the church’s embrace of the L.G.B.T.Q. community. (“Our sexuality,” it said, “is a gift from God.”)

The announcement that Ms. Butler’s contract would not be renewed came in a July 1 email to the congregation, signed by Ms. Butler and Marilyn Mitchell, the chairwoman of the church’s governing council. It hinted at none of the turmoil.

The email praised Ms. Butler’s contributions to the congregation and asked members to pray for her “continued ministry as a leader in the progressive Christian world.”

Last week, the Rev. Michael Livingston, who has stepped in as interim senior minister, said the church would not comment on Ms. Butler’s dismissal.

Ms. Butler did not respond to messages seeking comment, but in a Twitter post last week, she called her time at the congregation “one of the greatest honors of my life.”

“I love that beautiful, beloved congregation,” Ms. Butler said, “and I believe that when we love each other, we can change the world.”

A day later, the post on Twitter had been deleted and replaced with a link to the church’s letter to congregants and one word: “Transitions.”

Accounts of her dismissal were based on interviews with congregants, lay leaders and current and former employees, as well as internal church documents obtained by The New York Times from church officials who were critical of how Ms. Butler had been treated.

The investigation of Ms. Butler’s complaint was conducted by an outside company. It found that the former member of the church’s governing council, Dr. Ed Lowe, had violated the church’s anti-harassment policy and engaged in behavior that was “condescending and dismissive,” according to a copy of the report.

Ms. Butler recounted “inappropriate comments” by Dr. Lowe, 70, toward her and other members of the staff, the investigation determined.

When she sent Dr. Lowe a photograph taken as he was looking at a baby, he replied, “I still have a way with the young girls.”

In a text message about shifting church funds, he told one female minister, “We should’ve gotten a thank-you note from the church for that. Or, you should’ve at least kissed me first,” according to the investigation.

In a separate instance, when a dog at a church function kept going to that minister, he said, “Well, he isn’t the first dirty dog” who wanted to be in her lap.

Dr. Lowe, a physician, said in an interview that the allegations against him stemmed from his criticism of Ms. Butler’s management style.

“It was clearly a put-up job, as far as I’m concerned,” he said, arguing that his opponents were trying to marginalize him.

“A bully can only ride your back if you bend over, and I stood tall and erect,” he said, referring to Ms. Butler. “That irritated her more than anything else.”

He said he went through coaching over his behavior, and had apologized to the women.

He called the wine and T-shirt, which had the “Sweet Bitch” logo, a “gesture on my part to be friendly.”

He said his comments to a church employee, which she believed were condescending, were harmless.

“When I heard what was going on, I felt redeemed,” Dr. Lowe said. “I felt my church has been saved. I felt vindicated.”

In interviews, some members of the congregation said they were dismayed that Ms. Butler had left.

“I guess it’s the first time in my adult life — and this is a very privileged statement to say — that I’ve been disappointed and hurt by the church,” said Rebecca Kesting, 30, who joined Riverside after Ms. Butler’s arrival. “I know that the church is more than our senior minister, but we had a lot of momentum, and I’m concerned what a loss of leadership will mean for that.”

But her critics contend that her style alienated many in the congregation, and that the divide could not be bridged.

“I didn’t agree with the direction of some of the things that were going on,” said Virl Andrick, a member of the church for 35 years. “There will be a new regime,” he said. “We just want the church to thrive and flourish.”

Ms. Butler had been recruited from a church in Washington, D.C., that she had grown from a 75-member congregation to nearly 300 people.

As mainline Protestant churches have struggled to resonate with younger people, Ms. Butler assembled a solid following, and built a reputation with progressive Christians outside the church, as she championed Riverside’s social justice mandate.

She wrote in searing, and deeply personal, terms about her decision years ago to have a late-term abortion. She visited the border with Mexico, where she prayed for separated migrant families and decried the barrier wall as a “monument to the hubris of empire.”

And she wrote about how she wrestled with the harassment allegations. She said she had been forced to challenge “lessons I had learned my whole life — lessons of ‘just get used to it’ and ‘experiences like this are part of being a woman in leadership.’”

“And one day, witnessing another exchange I found unprofessional and uncomfortable,” Ms. Butler wrote in the post, which was published on the Patheos website, “I had the realization: I wonder if this one lay leader has been allowed to continue behaving inappropriately because I did not report the incident that had happened to me several months before?”

An embrace of dissent is baked into the collective soul of Riverside. There have been differences over pastors before.

Her predecessor surprised the congregation by resigning less than a year into the job. In his resignation letter, he cited disharmony that had made it “virtually impossible to establish a fruitful covenant between the congregation and me.”

Mr. Wright, the former executive minister for programs, said the charged environment grew out of the congregation’s passion. “We strive to be a heavenly banquet where all are welcome,” he said. “But often that banquet erupts into a food fight.”

Now, some congregants said they see the protracted search for a leader as a distraction, burning through energy that should be directed toward the church’s mission.

“I want to see the congregation united in its vision,” said David Vaughn, who joined the church in the 1980s. “I’m tired of this side versus this side. Let’s be God’s church and do God’s work.” 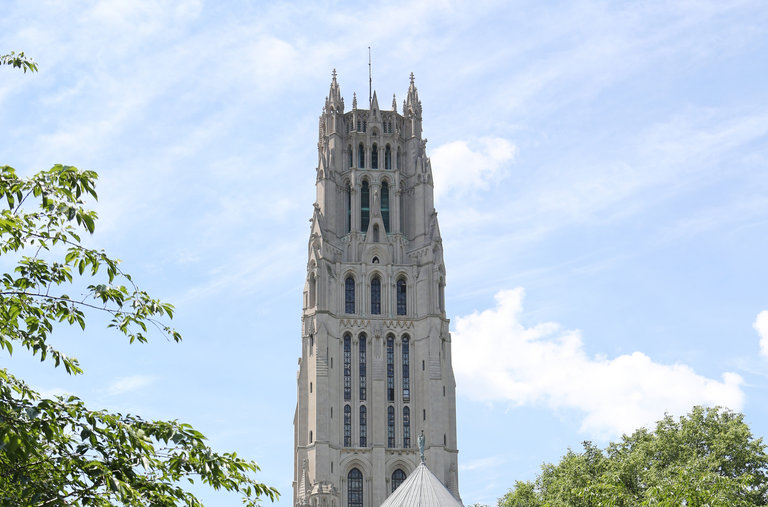 Rick Rojas has been a staff reporter for The New York Times since 2014. He has been a regional correspondent for the Metro staff covering New York, New Jersey and Connecticut, and has reported from The Times’ bureaus at 1 Police Plaza and in Phoenix and Sydney, Australia. @RaR

US coronavirus cases reach 34, and more are expected