Forecasters expect severe weather, including flash flooding and the possibility of tornadoes, to continue threatening much of the southern United States on Tuesday, after two days of storms caused widespread damage and killed at least two people.

The National Weather Service’s Storm Prediction Center said there was an “enhanced risk” of severe thunderstorms for large stretches of the South, including southern Mississippi and west-central Alabama. There, damaging winds of up to 70 miles per hour and hail up to the size of golf balls were likely from late Tuesday morning into the early evening, with tornadoes possible, according to the forecast office in Jackson, Miss.

The area was placed under a flash flood watch, with as much as two to four inches of rain within three hours having the potential to flood roads and threaten structures.

Much of central Tennessee was under a severe thunderstorm watch Tuesday morning, with concerns of wind gusts up to 70 miles per hour and quarter-sized hail. “An isolated tornado or two cannot be ruled out,” meteorologists said. 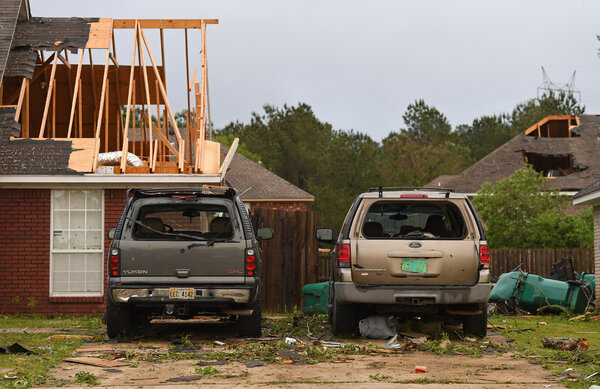 In Georgia, forecasters warned “several rounds of strong to severe storms” could be possible into Tuesday night.

The threat of more severe weather comes after two days of the region being battered by storms, which included tornadoes touching down in Mississippi, Georgia, Kentucky, South Carolina and Texas.

One man died when power lines and a tree fell on his vehicle outside Atlanta, according to the authorities. And a woman in Bonaire, Ga., died when a tree fell onto her home, the Houston County Emergency Management Agency said.

Tens of thousands of people were without power Tuesday morning in Texas, Arkansas, Tennessee and Kentucky, according to PowerOutage.us, a website that tracks loss of service. Cities and towns across the South reported structural damage from tornadoes, high winds and punishing rains, with images and videos on social media showing uprooted trees and damaged buildings.

In Texas, local news outlets reported at least two tornadoes on Monday. Three people were injured, one seriously, when three 18-wheelers flipped and several other vehicles were involved in a crash on Interstate 35 near Dallas, according to WFAA, a Dallas news station.