Rogue ‘M.T.A. Museum’ Celebrates Everything Dingy About the Subway

Viewed in a certain light — usually fluorescent — many of New York City’s subway stations are aging underground crypts in need of serious renovation.

White tiles have faded to a dingy beige; some bear the rust-colored scars left by water damage. Floors are so mottled one might have trouble discerning their original hue. And metal pillars are covered in layers of flaking paint that cannot conceal the corrosion underneath.

These are not, traditionally, the qualities associated with an aesthetic masterpiece.

But that did not stop two art students from playfully reframing New York’s subway system as an art museum that documents and preserves the city’s anthropological history.

As part of a project they are calling the “M.T.A. Museum,” the duo has been placing small cardboard signs similar to museum labels at several subway stops in Brooklyn and Manhattan. The placards’ witty titles and captions cast the subway system’s floors, furniture and metal fixtures as works of art.

Well-worn wooden benches were grouped into a collaborative work called “Untitled / Butt Pattern,” with the gentle depressions left by the rear ends of straphangers cheekily called “a political statement on transit and the concept of rest.” 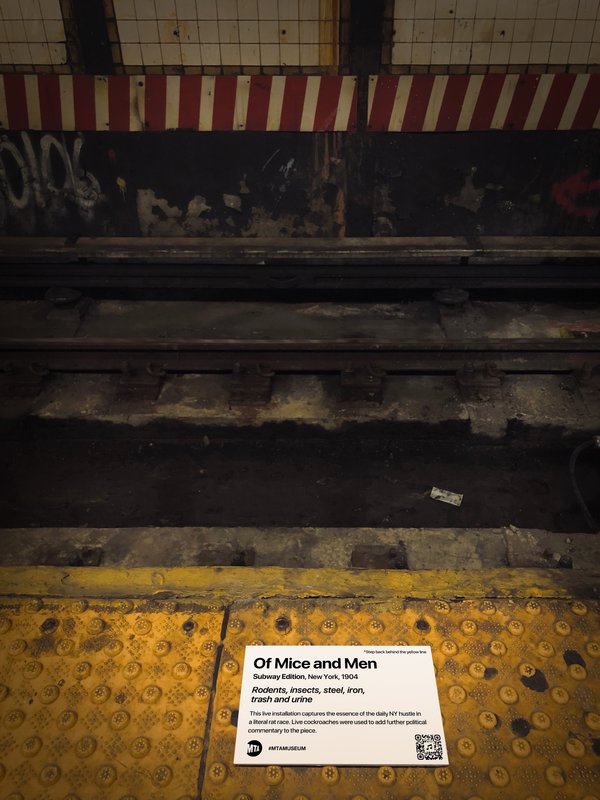 The tracks in front of those benches were declared a live installation titled “Of Mice and Men” that captured “the essence” of the daily New York rat race; rodents, insects, trash and urine are listed as key parts of the composition.

The two students, who study advertising at an art college, have peppered a few art jokes into their labels as well. Splotches of old chewing gum speckling a dirty concrete floor became “an everyday creative masterpiece” that drew inspiration from the celebrated Japanese artist Yayoi Kusama and her polka dots.

That piece, called “Concrete Jungle Dreams of Bubble Gum,” and many of the others appeared to be as ready for the Instagram generation as some of Ms. Kusama’s works are. Posts documenting the labels began surfacing on social media sites last week and have continued to pop up in the days since. (Unlike Ms. Kusama’s exhibitions, photographers didn’t need to wait in lines that stretched around the block.)

The two students behind the project, a man and woman who asked to remain anonymous because they did not have approval from the Metropolitan Transportation Authority, said in an interview Monday that they hoped their cards would help change commuters’ perception of structures that have long been called dirty and decrepit.

“We’re shining a light on the M.T.A. stops by using them as an art form,” one said. “We wanted to change the negative perception.”

The M.T.A. was “flattered by the parody,” Shams Tarek, a spokesman for the agency, said in an email. But he also said the agency would remove “unauthorized postings” at stations.

The students, who described themselves as “foreigners,” said that when they first came to the city, they were impressed by the subway and its age.

But after hearing complaints about the stations’ conditions, the students wanted to remind people that the subway’s wear and tear stemmed from its history.

“As New Yorkers, we should be proud to use one of the oldest and most historical transit systems every day,” one said.

The students said they plan to continue posting cards in stations in the coming days.

Those who noticed the M.T.A. Museum cards Tuesday morning said they brought some joy to their day.

“In a way, the M.T.A. has been a museum of public transport for a long time,” said Mathias Wilk, 36, a photographer who saw the signs displayed at the Bedford Avenue L train stop. “It feels about right that someone finally acknowledged this.”

Alex Anez, 22, who stopped to read a sign affixed on the bench seat next to her, agreed. She said she appreciated the reminder to notice her surroundings. “New Yorkers don’t really pay attention to anything going on,” she said.

Still, a survey of the stations where cards have been posted suggested that getting commuters to approach these transit points as if they are art galleries might take more work.

At the Bedford station, where there were plenty of signs on display, commuters’ eyes were too glued to their phones for anyone to take notice. For about 30 minutes, person after person plopped down on benches without paying any mind to the cards pasted on them.

Shortly before Ms. Anez took her seat on the bench, a young couple clad in denim jackets were occupying the same spot. The two chatted for a minute while they waited for their train to arrive. When it did, both of them stood, read the card against which one had been resting, and smiled.

“Funny,” one said to the other.

Then they hurried to catch their train before the doors slammed shut.