Petition calls for Kobe Bryant to be on NBA logo 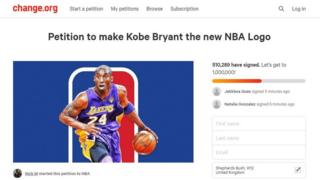 More than 800,000 people have backed a petition to use Kobe Bryant’s image as a new official NBA logo.

Bryant, considered to be one of the greatest basketball players in the game’s history, died in a helicopter crash in California on Sunday.

He was flying with his 13-year-old daughter Gianna, who also died.

The current logo was designed by Alan Siegel, and features the silhouette of another great LA Lakers player Jerry West, who is 81 years old.

Writing on Change.org, the petition’s founder Nick M said: “With the untimely and unexpected passing of the great Kobe Bryant please sign this petition in an attempt to immortalise him forever as the new NBA logo.”

Supporters have also tweeted their own versions of the logo, mocked up with Bryant’s silhouette.

No disrespect to Jerry West but I think it’s time they change that #NBA Logo pic.twitter.com/1Gbr85amQa

Apart from a tweak to the font in 2017, the logo for the National Basketball Association has been the same since it was first designed in 1971.

It is not clear whether the organisation would consider updating its logo with Bryant’s silhouette.

West, who was also once the LA Laker’s general manager, is yet to comment on the campaign.

However, West did pay heartfelt tribute to Bryant after news of his death was confirmed, telling CBS News he felt as though he had lost a son.

“This loss of Kobe, Gianna, and everyone on board, is beyond tragic and incomprehensible,” he later said in a statement. “I will love Kobe forever and always cherish the time that I spent with him.

“I watched him grow from an energetic kid into the man he became, making a difference in so many people’s life. He has left the world a better place.”

Who was Kobe Bryant?

Bryant was a five-time NBA champion who played his entire 20-year career with the Los Angeles Lakers, as well as a double Olympic gold medallist. He retired in April 2016.

His achievements include being the 2008 NBA Most Valuable Player (MVP) and two-time NBA Finals MVP, and was also NBA scoring champion twice.

He famously scored 81 points against the Toronto Raptors in 2006, the second-highest single-game total in NBA history.

He also won an Oscar for best short animated film in 2018 for Dear Basketball, a five-minute film based on a love letter to the sport he had written in 2015.

He leaves three other daughters, Natalia, Bianca and Capri, and his wife, Vanessa. 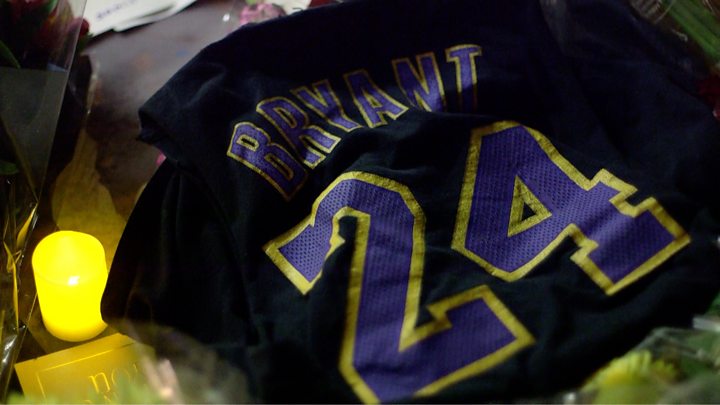