Donald Trump has defended pulling out of the Paris climate change agreement, saying it was “designed to kill the American economy” and that he acted to save “millions” of jobs.

The US president announced his nation’s withdrawal from the accord in June 2017, claiming it was “punishing” America’s coal industry and risking countless jobs.

The decision sparked dismay among many world leaders and climate change campaigners.

However, the withdrawal did not formally happen until earlier this month. Speaking as part of the G20 meeting of world leaders – being hosted virtually by Saudi Arabia, Mr Trump said: “To protect American workers, I withdrew the United States from the unfair and one-sided Paris climate accord – a very unfair act for the United States.

“The Paris accord was not designed to save the environment, it was designed to kill the American economy.

However, the president also said his administration had made “environmental stewardship” a “sacred obligation”.

He claimed the US had made significant progress in the last four years in ensuring the country has “among the cleanest air and cleanest water on the planet”.

Mr Trump’s actions and justification for quitting the deal have been rejected by US president-elect Joe Biden, who has said he will rejoin the deal as soon as he takes office.

The president is still leading the US for the next two months, until Mr Biden’s expected inauguration on 20 January.

His various legal challenges over the election result – where he claims foul play without providing evidence – have so far proved unsuccessful. 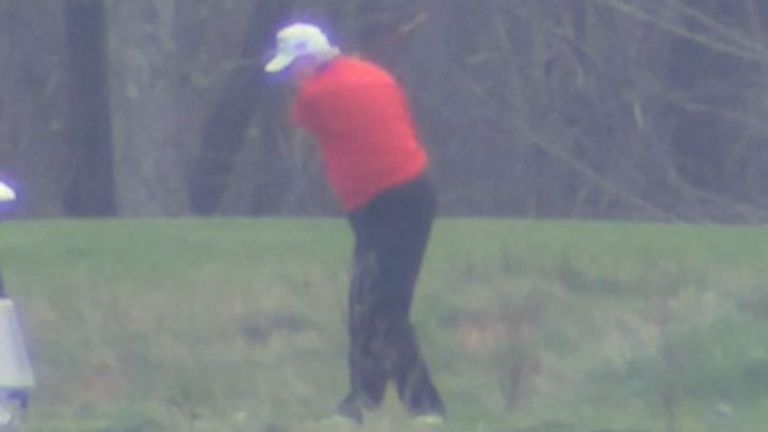 Video showed him golfing on Saturday while some of the world’s most powerful leaders took part in a G20 session on the global response to the coronavirus pandemic.

Mr Trump tweeted on Sunday that he had attended yesterday’s meeting early and made a speech.

The president did attend the morning session, but was golfing in Sterling, Virginia, when the afternoon panel took place.