Two fast-moving wildfires, having burned more than 18,000 acres in Northern California since they began on Sunday, prompted new evacuation orders as the year’s grueling fire season wore on, the authorities said.

The Zogg Fire in Shasta County and the Glass Fire in Napa County burned about 7,000 and 11,000 acres as of Monday morning, according to the state fire agency, Cal Fire. In nearby Sonoma County, where fires were burning uncontained on Sunday night, there were at least nine evacuation zones.

On Monday morning, Cal Fire said that there was an “immediate threat to life” in some areas, and that the authorities in Napa and Sonoma had opened evacuation centers.

The Napa County Sheriff’s Office also warned people to “evacuate immediately.” On Twitter on Sunday night, the office shared a video of a deputy evacuating as fires incinerated trees, embers flew into the air and smoke enveloped a roadway.

The new burst of fires comes as the West Coast struggles to recover from one of the worst seasons on record. Wildfires this year have left more than 25 people dead, destroyed more than 7,000 structures, and scorched more than five million acres in California, Oregon and Washington. State leaders and experts have linked the devastating fire season to climate change, saying it is part of a long-term trend of more frequent and disastrous blazes in the West.

And meteorologists warned of more fire-prone conditions this week, after repeated heat waves and weeks of windy weather this summer. On Monday morning, Cal Fire said two additional fires that started Sunday night had already merged with the Glass Fire.

More than 1,000 firefighters and emergency personnel are battling the fires, Erick Hernandez, a code compliance officer for the Napa County Fire Department, said on Monday morning.

“We don’t have any numbers on how many structures are destroyed or damaged,” Mr. Hernandez said, though he said more than 8,500 structures were threatened. “Some of the areas are difficult to get into because of the terrain.” He said if people did not feel safe, they should evacuate.

On Sunday, a hospital in Napa County, Adventist Health St. Helena, temporarily suspended services and evacuated all patients because of the Glass Fire, its president, Steven Herber, said.

He added that 55 patients were transported to other hospitals and that family members were notified. The hospital said that its emergency department would not be accepting patients and that surgeries and tests would be postponed.

“The safety and well-being of our patients and associates are our highest priority,” Mr. Herber said.

In Santa Rosa, in Sonoma County, residents of the Oakmont Gardens residence for older people were evacuated by bus as another fire approached the city. 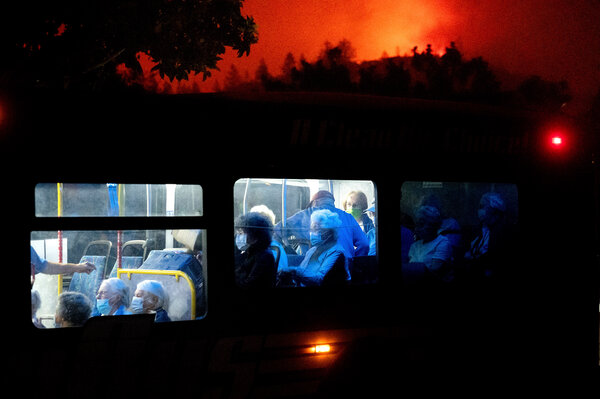 To the north in Shasta County, the Zogg Fire began early on Sunday and prompted mandatory evacuations in several areas, according to Cal Fire. It was not immediately clear how many residents and homes were part of the evacuation zone.

Over the weekend, the National Weather Service placed the greater Bay Area under “a red flag warning” with dry and windy conditions and low humidity; the service extended the warning into Monday evening.

A red flag warning is issued for weather that can result “in extreme fire behavior that will occur within 24 hours,” according to Cal Fire.

The Weather Service also forecast wind gusts of up to 45 miles per hour and up to 50 miles per hour at higher elevations, raising concerns that weather conditions could fan small fires quickly into huge ones.

As a precaution, the utility company Pacific Gas and Electric said it had shut off power on Sunday in portions of the North Valley and Northern and Central Sierra regions, affecting about 65,000 customers. Power was expected to be restored by the end of the day Monday.

“Once the high winds subside Monday morning, PG&E will inspect the de-energized lines to ensure they were not damaged during the wind event, and then restore power,” the company said in a statement. “PG&E will safely restore power in stages as quickly as possible, with the goal of restoring power to nearly all customers who are safe to restore within 12 daylight hours after severe weather has passed.”

The 2020 fire season has also proved disastrous for Oregon and Washington State, burning another million acres across both states, destroying hundreds of homes and, for weeks, blanketing the West Coast in some of the most unhealthy air conditions in the world.

Experts say that climate change has worsened the fires. Higher temperatures and drier conditions have made it easier for vegetation to burn, causing fires to become bigger, more intense and harder to extinguish.

In Asia, US' Pompeo expected to bolster allies against China