Home » Americas » N.Y.C. to Allow Indoor Dining, in Milestone on Recovery From Pandemic

N.Y.C. to Allow Indoor Dining, in Milestone on Recovery From Pandemic 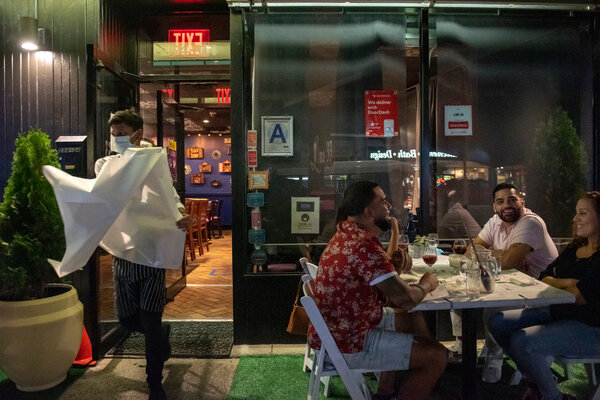 Gov. Andrew M. Cuomo announced on Wednesday that the prohibition on indoor dining in New York City would be lifted on Sept. 30, a boost to the city’s recovery from the pandemic that would end its status as one of the few places in the nation with a complete ban.

The governor’s announcement, which would allow restaurants to open indoor tables at 25 percent capacity, could be a major milestone in the coronavirus crisis in New York City, where restaurants form a critical part of the city’s economy and its currently moribund tourist trade, and are a vital part of its usually vibrant social fabric.

The announcement came more than two months after the governor and Mayor Bill de Blasio halted a plan to reopen indoor dining at restaurants, citing ongoing concerns about the coronavirus, which has killed more than 30,000 people in New York. But the infection rate in the state has been kept below 1 percent for several weeks straight, allowing for the easing of some restrictions.

“Because compliance is better, we can now take the next step,” the governor said.

Mr. Cuomo said that restaurants would be permitted to use a quarter of their indoor tables beginning at the end of the month, still three weeks away, and around when fall weather is likely to put a chill on outdoor tables. Additional restrictions would also be placed on restaurants and their patrons, including a requirement to wear face coverings when not seated.

In recent weeks, as the state cracked down on bars that were violating social distancing rules, Mr. Cuomo said that he was worried about enforcement in restaurants, putting the onus on Mr. de Blasio to find a way to check for compliance.

Mr. Cuomo, a third-term Democrat, shuttered dining rooms statewide in March, as coronavirus surged in the state, though delivery and take-out food were still available.

Still, even as other parts of the state reopened their dining rooms in late spring, the city’s indoor tables remained closed, though many restaurants made game and in some cases successful incursions into sidewalk service.

Even with the Sept. 30 reopening plan, the restrictions in New York City will still be more stringent than other parts of the state, where restaurants are operating with half their indoor tables in use.

These Confederate statues were removed across 3 dozen states. But where did they go?