Home » Americas » N.Y.C. Is Opening Its Own Virus Testing Lab to Address Shortages

N.Y.C. Is Opening Its Own Virus Testing Lab to Address Shortages

A new lab may help the city process test results within 24-48 hours. 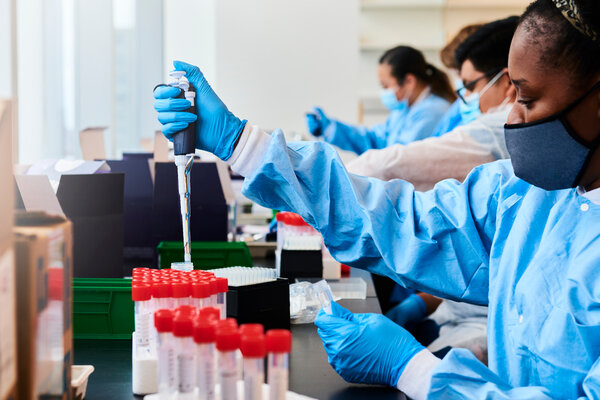 After months of complaints about testing delays, New York City officials on Thursday are set to announce that they have opened a lab in Manhattan that should significantly cut down on wait times as the city prepares for its most ambitious period of reopenings, with public school classes and indoor dining scheduled to begin this month.

Rather than depend on the big laboratory companies — which have been inundated with demand from across the country as the virus continues to spread, leading to backlogs — the new facility will prioritize New York City residents, meaning turnaround times within 24-48 hours, officials said.

Within a few weeks it is expected to be able to process more tests for city residents than any other lab, a rare bright spot for New Yorkers, who since March have experienced numerous woes in trying to get tested for the coronavirus.

“It will give us more capacity just in terms of sheer numbers,” said Dr. Jay Varma, a City Hall adviser who is playing a leading role in the city’s coronavirus response. “It will also give us control because this is a laboratory really dedicated to New York City.”

New York City has one of the most ambitious coronavirus testing programs in the country, swabbing more than 200,000 people a week, more than 2 percent of all city residents. The new lab, which began processing tests this week, should eventually help significantly expand on that.

The laboratory, on the 12th floor of a building on First Avenue and East 29th Street, is run by Opentrons, a small robotics firm. But New York City has played a significant role in the laboratory’s creation, city officials said. For now, the city and its public hospital system are the lab’s only customer.

At first, the new laboratory, which is being called the Pandemic Response Lab, will handle just a few thousand tests a day, mainly from samples collected at testing sites run by the city’s public hospital system, officials with City Hall and Opentrons said.