Seeing a $450 to $600 electricity bill no longer fazes Patricia Young of Itta Bena, Miss., a city of about 1,800 people in the Mississippi Delta.

Some months, the bill for Ms. Young’s home and the day care center she owns can total almost $1,000.

“It’s just got to the point where light bills are more than your mortgage,” she said.

Despite concerns by Ms. Young and other residents about their costly bills, the city was threatened with the potential loss of power after accumulating hundreds of thousands of dollars in debt with its electrical provider over more than a decade.

The city — which buys electricity wholesale and then resells it to residents — owed more than $800,000 to the wholesaler, Municipal Energy Agency of Mississippi, as of August. The agency sent a letter that month to the Mississippi Public Service Commission, which oversees utilities in the state, saying it would pull out as the city’s electrical provider by Dec. 1 because of the unpaid debts.

Concern over the potential power loss, which was reported by The Associated Press and The Greenwood Commonwealth, prompted the state commission to get involved, even though it does not have direct jurisdiction over the city’s electric system, said Brandon Presley, a commission member. (Because Itta Bena owns its electric system, responsibility falls to the city, not the commission, to regulate its rates.)

After the recent intervention from the state, the threat of power disruption seems to have been held off for now.

Some residents have complained that Itta Bena’s struggle to keep the lights on is the result of city leaders’ mishandling of the municipal power system. The city’s economic health has also been undermined by a decline in the number of residents and businesses.

At a public hearing on Thursday, the state commission committed to keeping the city’s lights on and working with its leaders to transfer control of Itta Bena’s electric service to a Mississippi power company.

The transfer, which city leaders approved on Friday, will allow the commission, rather than the city, to regulate the rates customers pay.

“My end goal for this is for citizens of Itta Bena to get a stable, reliable source of power that is affordable, brings benefits to the community and avoids any type of looming crisis like this,” Mr. Presley said.

The possibility of losing electricity alarmed residents, many of whom say they have been doing their best to pay skyrocketing bills amid a pandemic that has made their financial situations even more dire.

“Why should we be having a blackout if we’re paying our utility bills?” Ms. Young said.

She had sent a petition, signed by about 300 residents, and copies of electricity bills, to the Mississippi Office of the State Auditor, urging it to look into the city’s electric department and rates.

Since she moved to Itta Bena with her husband 23 years ago, Birdia Williams’s electricity bill has ballooned. In July, she paid about $600, putting her and her husband in a tight spot financially. 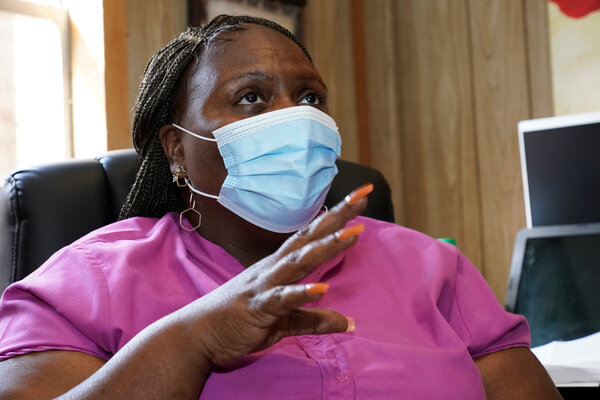 The city’s electric system has been a point of a contention for years, according to Thelma Collins, a former mayor whose third term ended in 2017. Ms. Collins said that while in office, she had worked to curtail the city’s debt to its electrical provider, but that improvements had been undone in the years since she left office.

J.D. Brasel, Itta Bena’s current mayor, did not respond to a request for comment, but he said at the hearing on Thursday that the city would not be able to pay its debt by the Dec. 1 deadline it had been given.

The city’s ordeal with its electric system is evidence to residents of just how much Itta Bena has changed over the years.

From 2000 to 2010, the city’s white population decreased to about 10 percent from about 20 percent, according to census data. Black people now make up about 90 percent of the city’s population, and the city’s median household income is just over $20,000.

Founded in the mid-1800s by Benjamin G. Humphreys, a plantation owner who went on to serve as governor of Mississippi from 1865-68, Itta Bena became known for its production of cotton and other crops. After the abolition of slavery and Reconstruction, sharecropping emerged in the city and throughout the Mississippi Delta, fueling poverty among Black people who rarely saw profits from their work.

Today, businesses have fled the city’s downtown, leaving abandoned buildings in their wake. Residents often go to the neighboring city of Greenwood, Miss., for groceries and other necessities, Ms. Young said.

A solution has yet to be reached concerning the city’s remaining debt to its electrical provider, with the main concern — keeping the lights on — having been solved for now.

The state’s stepping in has provided some comfort to residents, who said they had never imagined that their city would face the possibility of being left in the dark.