Mike Foster, Louisiana Governor During a Lull, Dies at 90

Mike Foster, a former two-term Republican governor of Louisiana who shepherded the state through a period of relative calm — in the wake of the corruption scandals of his flamboyant predecessor, Edwin W. Edwards, and before the devastation of Hurricane Katrina — died on Sunday at his home in Franklin, La. He was 90.

After two terms as a Democratic state senator, Mr. Foster switched to the Republican Party in 1995 in the midst of his successful first run for governor, joining a broader Republican realignment among conservative white Southerners in the latter half of the century.

During that campaign, Mr. Foster publicly welcomed the endorsement of David Duke, the former grand wizard of the Ku Klux Klan who had lost a runoff election for governor four years earlier. It was later revealed that Mr. Foster had bought Mr. Duke’s list of contributors and supporters.

But the general tone of Mr. Foster’s eight years in office was one of business-oriented conservatism with a dose of practicality. He oversaw increased funding for schools and for higher education and supported a major retooling of the state tax system to make it less regressive. These and other achievements, his supporters argued, improved the lives of working-class people, including many of those from minority groups who were vilified by the likes of Mr. Duke.

“He really tried to reform the inadequacies of Louisiana’s fiscal structure,” Clancy DuBos, political editor of Gambit, a weekly newspaper in New Orleans, said of Mr. Foster. “He did this because he cared about poor people.” 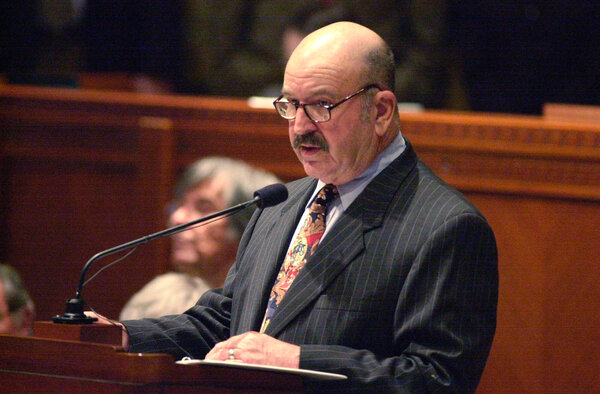 And he notably gave Louisiana a respite from the seemingly nonstop drama that had been supplied by Mr. Edwards, a charming rogue who in the later years of his four terms in office was besieged by embezzlement and conspiracy indictments and federal investigations into his ties to the gambling industry.

Mr. Edwards was eventually convicted, in 2000, of crimes stemming from the awarding of casino licenses. As Mr. Foster was wrapping up his time in office in 2004, the first thing a statehouse reporter mentioned, in an article assessing Mr. Foster’s eight-year run, was that it had been “scandal-free.”

Murphy James Foster Jr. was born on July 11, 1930, in Shreveport, La. His family soon moved to Centerville, in coastal St. Mary Parish. His grandfather Murphy J. Foster had served as governor from 1892 to 1900 (he was later a United States senator) and was best known for codifying segregationist Jim Crow laws and using the state militia to put down a New Orleans union strike.

Mike Foster, whose father was a struggling sugarcane farmer, did not grow up economically privileged. He worked on an oil rig to put himself through college, joined the Air Force and served in the Korean War, spent many years as a tenant farmer, and eventually started a successful construction company.

Along with a lifelong love of hunting and fishing, those experiences later allowed him to make the case that he was familiar with the values and struggles of everyday Louisianians.

“I wasn’t one of those gentlemen farmers,” he said, even though he was sometimes described as a “wealthy planter” in the press. “I fixed my own tractors.”

He is survived by his wife, Alice Foster, and four children.

Mr. Foster was in his late 50s when he decided to enter politics, running for and winning a State Senate seat in 1986 that had been held by a man who had angered him by not returning his phone calls. By 1995, after Mr. Edwards said he would not seek a fifth term in office, Mr. Foster launched his campaign for governor from two trailers on the site of his construction company in tiny Franklin, also in St. Mary Parish.

He ran as an anti-corruption candidate, and a conservative one, pledging to get tough on crime and fend off gun-control efforts. He criticized his runoff opponent, Cleo Fields, an African-American and Democratic member of Congress at the time, for supporting lenient criminal sentences, referring to him as “Cut ’em Loose Cleo.” During one debate, he referred to New Orleans, a city with a large Black population, as a “jungle” in the context of a conversation about crime, a comment for which his campaign later apologized.

His tenure was not completely scandal-free, however: He was ordered to pay a $20,000 ethics fine for failing to disclose the purchase of Mr. Duke’s supporter list to elections officials.

Mr. Foster was succeeded by a Democrat, Kathleen Babineaux Blanco, who was in office when Katrina struck the state in August 2005.

Mr. Foster was known for cultivating his interests and passions beyond governing while in office. He enrolled in law-school classes at Southern University in Baton Rouge and learned to fly a helicopter. In keeping with his business-like view of managing government, he argued that his new skill as a pilot would be a boon to taxpayers in the event of an emergency.

“Look at it this way,” he said, if his pilot “keels over,” he could take control and “save the state two million dollars for a new helicopter.”

Justice Kavanaugh corrects an error in opinion that alarmed Democrats.