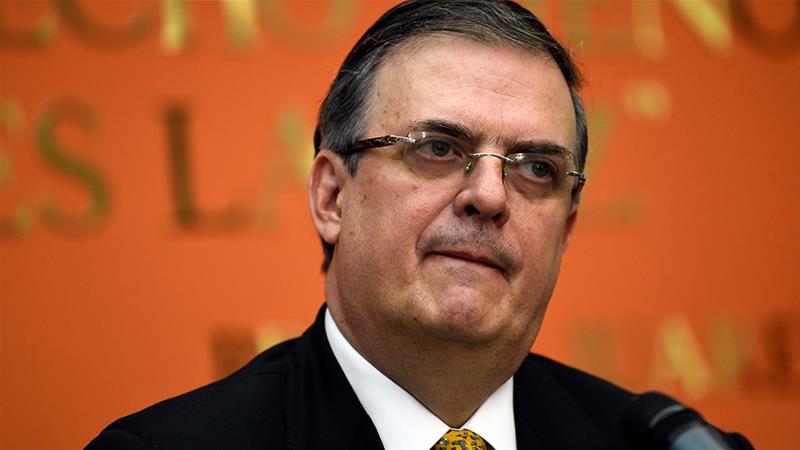 Mexican Foreign Minister Marcelo Ebrard on Tuesday reiterated that his country refused to act as a so-called safe third country, which would mean that US-bound asylum seekers travelling via Mexico would have to first claim asylum in Mexico.

Ebrard rejected the idea again a day after acting US Customs and Border Protection Commissioner Mark Morgan told reporters US officials were working to come up with some sort of “cooperative agreement,” when asked if the United States still sought a “safe third country” agreement with Mexico.

Mexican and US officials met on Thursday to discuss progress what they saw as progress towards reducing irregular immigration to the US.

After the meeting, Ebrard said there has been a “significant decrease” in US-bound immigration through Mexico, especially from Central America, and he expected the trend to continue.

Ebrard said his meeting with Vice President Mike Pence, and a brief exchange with President Donald Trump, was friendly.

“What Mexico has done is working,” said Ebrard, admitting that border crossings were still up from averages in September, “but the tendency is irreversible. … It is something that we think will be permanent.”

Ebrard said tariffs were not discussed and that Mexico brought up the illicit flows of arms from the United States that Mexican authorities want to freeze.

Pentagon to keep 5,500 troops at border

Meanwhile, the US Defense Department said Tuesday that it would keep up to 5,500 troops deployed at the Mexican border for the coming year to help combat irregular immigration.

A week after announcing it would divert $3.6bn in funds for the construction of an anti-migrant wall on the frontier, the Pentagon said it had also approved a request from the Department of Homeland Security to maintain a troop presence as well.

On Tuesday, senior Democratic Senator Chuck Schumer announced that the party would soon introduce a resolution to terminate the emergency declaration, which would block the use of the funds on border wall projects.

“The president’s national emergency declaration was, and is, an outrageous power grab by a president who refuses to respect the constitutional separation of powers,” Schumer said.

Women Are Fleeing Death at Home. The U.S. Wants to Keep Them Out.