Melania Trump has shown off her final set of White House Christmas decorations before she and her husband are replaced by Joe and Jill Biden. The First Lady’s ‘America the Beautiful’-themed festive efforts include a room filled with fir trees decorated with red baubles and white lights.

Mrs Trump has decorated another room at her Washington DC home with gold-accented trees. Meanwhile, the largest tree, which sits in the White House’s Blue Room, has been festooned with yellow ribbons.

The First Lady appeared in a video shared to her Twitter feed early Monday morning, and wore a Christmassy silver shirt as she took in the decorations. White House staff have also erected a toy train, and thousands of baubles, including a mini Air Force One and scale model of the presidential address itself.

The First Lady made an apparent nod to the ongoing Covid crisis and importance of essential workers, with hospital and cafe-themed decorations making an appearance in her video unveiling.

Also present was a white bauble stitched with ‘Be Best’ – the name of the first lady’s anti-bullying initiative, and hand-drawn baubles from schoolchildren across the United States.

Mrs Trump even hung stockings for her husband ‘POTUS’, herself (FLOTUS) and 14 year-old son Barron above one of their fireplaces.

The First Lady’s final set of decorations are markedly less controversial than previous efforts, which included a row of chill-white Christmas trees in 2017 that were attacked for looking cold and unwelcoming.

In 2018, Mrs Trump decorated one corridor with a row of crimson trees, with online jokers likening those decorations to characters from dystopian novel and TV show The Handmaid’s Tale.

Mrs Trump was secretly recorded expressing exasperation with criticism of her decorating efforts, saying: ‘Who gives a fuck about Christmas stuff and decoration, but I need to do it right?’

The remark was recorded by the first lady’s former aide Stephanie Winston Wolkoff in July 2018.

Wolkoff released the recording in October while promoting her new tell-all book, Melania and Me.

President-elect Joe Biden and his wife Jill will move into the White House on January 20.

Unconfirmed reports claim President Trump will make history by skipping the event to hold a rally announcing his plans to run for the White House again in 2024. 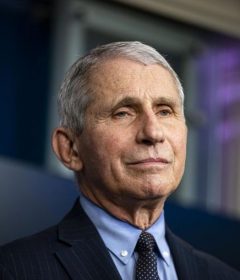