Meet the Water Witches of California 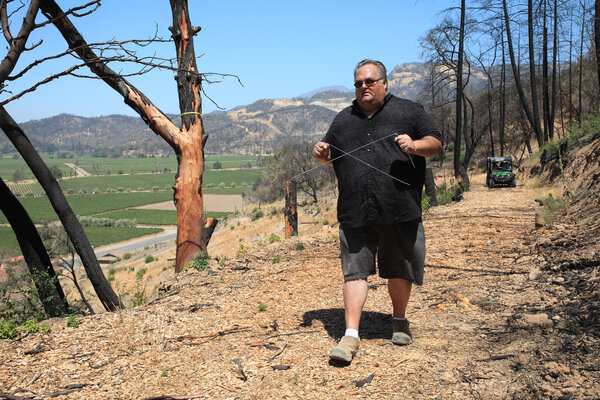 I first heard about the occult practice of water divining in Australia.

There, much like in California, heat, drought and wildfires ravage the landscape. In the country’s most recent drought, farmers contended with shrinking aquifers and drying-up rivers, while cities came close to running out of water. The impacts of climate change wreaked havoc on the environment, threatening Australia’s very way of life.

These similarities were clear after I arrived in America last month, only to be met with a blistering heat wave across the Western United States that melted roads and obliterated previous heat records. In Sonoma County, the region where I live, farmers’ taps are being switched off, and vintners are digging ever deeper for water.

The situation is desperate. And I wondered: Who might benefit from that desperation?

He’s “similar to a mortician,” he said.

“This is my busiest I think I’ve ever been in my life,” he said. Thompson 53, is a water diviner, or a water witch: He says he can locate groundwater in the fractures of the earth’s bedrock, using just two rods and a hunch.

The method is thought to have come into vogue in the Middle Ages in Europe, and is “totally without scientific merit,” according to the National Ground Water Association, a group of experts, including hydrogeologists, that promotes responsible water use.

But that has not stopped farmers and land managers from hiring Thompson, a second-generation water diviner based in Santa Rosa, who formerly co-owned one of Northern California’s largest well-drilling companies and claims to have found thousands of groundwater sites across the state.

“This is the worst drought I’ve seen in my lifetime,” Thompson said. “In California, we’re going deeper and deeper,” he said of the wells people were drilling to access water.

Just a two-hour drive from the nation’s technology capital of Silicon Valley, some vineyards continue to lean on Thompson’s work.

“I haven’t ever used a geologist to find water,” said Johnnie White, the operations manager of Piña Vineyard Management, which runs dozens of vineyards in Napa Valley. Still, White acknowledged, “I find it all very far-fetched.”

Last week, I spent the day with Thompson at one of those vineyards, which was burned in last year’s wildfires, and is flanked by scorched hills and charcoal trees. Now, the vineyard’s wells are going dry.

“It’s a disaster,” said Davie Piña, the owner of the vineyard management company, as he stood on the cracking earth. “Just what we need,” he added, “after another disaster.”

Follow live updates from the wildfires burning across the West.

Harvey Weinstein was transferred to Los Angeles on Tuesday to face rape and sexual assault charges. If convicted, he would serve any resulting sentence in California after finishing out his prison term in New York.

On Monday, Gov. Gavin Newsom demurred when asked whether he might impose a new statewide mask mandate. He stressed the importance of vaccinations instead, as Covid-19 cases continue to rise across the state, The Fresno Bee reports.

Smoke from fires burning in the Western United States and Canada made its way to the East Coast, contributing to the appearance of a red sun and health warnings.

In Needles, Calif., 5,000 residents are reliant on one water well that meets state water quality standards, The Los Angeles Times reports. The city, which borders Arizona, is one of America’s hottest, with temperatures exceeding 120 degrees.

Record levels of water thievery are being reported across California during the ongoing drought. CalMatters reports that one of the main culprits is illegal marijuana farms. Law enforcement officials says it’s difficult to prosecute water theft for illegal grows.

A 2017 law intended to protect against discrimination or mistreatment based on residents’ sexual orientation or gender identity was partially overturned on Friday, The Bakersfield Californian reports.

In a spacecraft built by his own rocket company, Blue Origin, the richest human in the world, Jeff Bezos, went to space on Tuesday. The spacecraft rose more than 65 miles into the sky above West Texas, the whole trip lasting only 10 minutes and 10 seconds after the launch.

“It’s a little bit like learning another language.” SFGate shows you what it’s like to be a Berkeley Bowl cashier, where you must learn to distinguish between a Santa Rosa pluot, an eagle egg pluot and a plumogranate pluot, more than a dozen varieties of apricots — and that’s just during stone fruit season.