Federal prosecutors have subpoenaed a top New York lobbyist closely tied to Assembly Speaker Carl E. Heastie and sought records from at least two of his clients and a state agency in recent weeks, according to people with knowledge of the inquiry.

The office of the U.S. attorney in the Southern District of New York has been scrutinizing the work of the lobbyist, Patrick B. Jenkins, a longtime friend and former aide of Mr. Heastie whose practice has flourished during Mr. Heastie’s speakership.

The inquiry is being conducted by the office’s public corruption unit, which focuses on wrongdoing by government officials, although its target was not clear.

The investigation is just the latest of many in Albany. Federal prosectors from Brooklyn are examining how Gov. Andrew M. Cuomo handled nursing home deaths during the pandemic. And Mr. Heastie has launched an impeachment investigation into the governor that is looking at sexual harassment accusations made by several women, as well as nursing home deaths and other matters.

Mr. Jenkins has long worked as a political adviser to Mr. Heastie, whose campaign committee has paid Mr. Jenkins’s firm as much as $1,334 a month over the past year for consulting work, according to recent filings. While Mr. Jenkins’s dual role as a lobbyist and political consultant is not illegal, the arrangement has been criticized by good government groups.

The speaker’s office said it had no knowledge of the federal investigation. Neither Mr. Heastie or Mr. Jenkins has been accused of wrongdoing.

Mr. Jenkins did not return calls for comment, though a person close to him said Mr. Jenkins has been told he is not a target of the investigation.

Mr. Jenkins, the president of Patrick B. Jenkins & Associates, the firm he founded in 2009, has been one of Albany’s most well-connected lobbyists and an influential voice, and fund-raiser, in Democratic political circles.

Among the Jenkins clients that have received subpoenas are DraftKings, a fantasy sports and betting platform, and del Lago Resort & Casino, located in Waterloo, N.Y., people with knowledge of the subpoenas said. But there was no indication that either firm, or any of the clients, are targets. Investigators have sought communications between Mr. Jenkins’s firm and his clients, as well as the lobbying firm’s contracts.

A state agency also received a subpoena several weeks ago focused on Mr. Jenkins’s private sector work, according to a person with knowledge of the matter.

A spokesman for the U.S. attorney’s office declined to comment.

A native of Queens, Mr. Jenkins has worked for Representative Gregory W. Meeks and the campaigns of former Gov. Eliot Spitzer and Mr. Cuomo.

His clout grew significantly after 2015, when Mr. Heastie, a Democrat who represents the Bronx, was elected speaker of the Assembly following the arrest of the previous speaker, Sheldon Silver, on federal corruption charges. 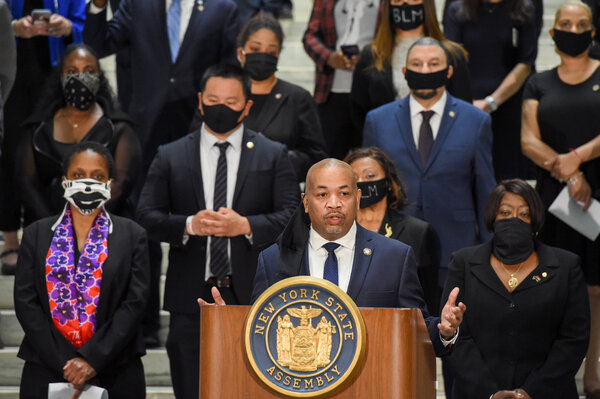 His firm’s list of clients is vast and diverse, and it ballooned after Mr. Heastie’s ascension, quickly making Mr. Jenkins the go-to lobbyist for those seeking access to Mr. Heastie.

The firm received more than $3.22 million in compensation in 2019, according to lobbying records, compared with just $37,500 in 2014, the year before Mr. Heastie was elected speaker.

“I would be naïve if I thought that some people didn’t reach out as a result of knowing my relationship with the speaker,” Mr. Jenkins told Newsday in 2019. But, he said, he believed his clients valued his work more than his connections. He added, “I think I work harder because my best friend is the speaker.”

Not all of Mr. Jenkins’s clients have been contacted by federal investigators: About two dozen of his current or former clients told The New York Times they had not received a subpoena. More than a dozen did not return requests for comment.

Firms that have hired Mr. Jenkins include the ride-hailing giant Uber, CVS Health and Charter Communications.

He has also been hired by big gambling companies such as the Stars Group, FanDuel and DraftKings, and by sports leagues, including the N.B.A., the PGA Tour and Major League Baseball, all of which have an interest in the state’s nascent mobile sports betting industry.

In April, lawmakers in Albany legalized online sports betting, a lucrative source of new tax revenue for the state, though licenses will not be awarded until months from now.

Mr. Jenkins has also lobbied for a number of real estate firms, charter schools and casino companies. His clients have also included three accounting giants — KPMG, Ernst & Young and PricewaterhouseCoopers — as well as the Union of Orthodox Jewish Congregations of America and the New York Trial Lawyers Association, two of his biggest clients at one point.

It is not the first time Mr. Jenkins has drawn scrutiny.

In 2016, The New York Post reported that Mr. Heastie’s campaign was paying Mr. Jenkins $4,000 a month for political consulting work, even as Mr. Jenkins lobbied on behalf of clients with important business before the Assembly.

In 2019, the Times Union of Albany reported that Mr. Jenkins’s firm provided unpaid campaign work, including fund-raising, to Democratic lawmakers, while also lobbying the State Legislature on behalf of his clients. The arrangement raised legal questions, but Mr. Jenkins maintained at the time that he was expecting payment from the lawmakers for his work.