“I do think that there will be a lot of maneuvering on the other side to try to put you in a box.”

Even before Senator Kamala Harris of California became the Democratic vice-presidential candidate, some of her most notable public moments were when she squared off against a white man.

Her sharp lines of questioning in the senate left Justice Brett Kavanaugh, Attorney General William Barr and the former attorney general, Jeff Sessions, flustered in exchanges that have since been shared widely on social media and have, for many, come to define her direct and tough approach. Another particularly memorable moment came during the Democratic presidential primary debates when she sparred with Joe Biden for his position on desegregating schools.

“There was a little girl in California who was a part of the second class to integrate her public schools and she was bused to school every day,” she said onstage, her gaze trained on Mr. Biden. “And that little girl was me.”

So, in a way, Ms. Harris has long been preparing for the vice-presidential debate on Wednesday. And, after the first presidential debate between President Trump and Mr. Biden last week failed to present a clear vision on either side, Democrats now view the coming event as an opportunity to rally the country, casting Ms. Harris as a star prosecutor who represents a stark contrast to the current administration.

Yet, experts and aides close to the Biden campaign said that it might be exactly this expectation of who she is that could pose gendered and racial challenges for her in the high-stakes event with Vice President Mike Pence.

“You should also be prepared for the slights, the efforts to diminish you personally, you as a woman,” Hillary Clinton said to Ms. Harris in a recent episode of Mrs. Clinton’s new podcast. “I do think that there will be a lot of maneuvering on the other side to try to put you in a box.”

As the third woman ever to engage in a national televised vice-presidential debate — the weight of which was amplified after Mr. Trump was hospitalized for the coronavirus, reminding the nation of the importance of the second in command — Ms. Harris will be under heightened scrutiny, especially given Mr. Biden’s old age.

On top of that, women in the public eye are consistently held to higher standards than male candidates with little room for error, said Mirya Holman, a political science professor at Tulane University focusing on women in politics. They are also judged by an elusive “likability” factor — a double bind for women in power who risk being perceived as “bossy” and “aggressive” if they behave too authoritatively, but risk being perceived as “incompetent” if they play too nice, she explained.

And if she’s not nice enough, she may be perceived as bad-tempered, hostile and angry — labels that carry racially charged implications and feed into hurtful tropes.

But any attempts to tone down what Ms. Harris is best known for out of concern that it may be perceived as overly aggressive in a one-on-one setting may end up coming across as inauthentic instead, Ms. Holman added, which is yet another gendered trap.

Time and again, a perceived lack of authenticity in a politician has been easier for a male candidate to overcome than a female candidate. Mrs. Clinton, for example, was often labeled inauthentic during her 2016 presidential campaign, trapping her in an impossible-to-break cycle, where every new attempt to appear authentic, like leaning into her role as a grandmother, made her seem even more inauthentic to voters.

In 2017, New York University, the Rhode Island School of Design and the French business school Insead created a social experiment that re-enacted the onstage performances of Mrs. Clinton and Mr. Trump from the 2016 presidential debates to study leadership and management. 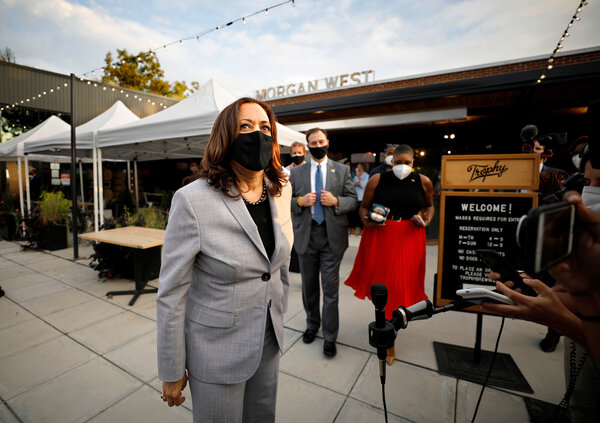 The debates were acted out word for word, down to the tone and bodily gestures of each candidate. Even the height and size differences were exactly the same. The twist was that the two candidates had switched genders — Mr. Trump was portrayed as a female candidate, Brenda King, played by Rachel Tuggle Whorton, and Mrs. Clinton was instead Jonathan Gordon, played by Daryl Embry.

The performances, though not intended as a rigorous scientific experiment, highlighted the role of authenticity in connecting with an audience, said Joe Salvatore, one of the creators and a professor of theater at New York University.

“Typical things that we heard were, ‘Now I understand why audiences might vote for Donald Trump’ because the messaging for them coming out of Brenda King seemed to be clearer,” he explained. On the other hand, the Jonathan Gordon character came across like a “smug used-car salesman” who smiled too much and recited too many facts, Mr. Salvatore added.

In other words, all of the things that female candidates are told to do — know the facts, be polite, smile — come across as inauthentic, underscoring just how difficult it is to thread the needle between being “likable” and being viewed as authoritative or smart enough to hold the highest office in the country.

“Repeatedly, women are told that they can’t be their authentic selves; this arts-based research project would indicate otherwise,” Mr. Salvatore explained. “I think that the danger of all of this debate prep is that the authenticity gets coached right out of the candidate.”

Ms. Harris will be up against a man who has more experience than she does of debating an opponent one-on-one at a national level and has also, in the past four years, consistently played the adult in the room, said Karen Finney, a political strategist close to the Biden campaign who worked with Senator Tim Kaine of Virginia, Mrs. Clinton’s running mate and Mr. Pence’s opponent in 2016.

“Mike Pence is very adept at defending Trump, but he tends to do it with a smile,” Ms. Finney said. He’s often “respectful and deferential,” which can be disarming for anyone expecting a tough fight.

Mr. Pence, in prior debates, has come across as a calm figure, difficult to fluster and nimble enough to go on the attack, The Times has reported.

Despite cutting that fatherly figure, the vice president will face his own set of challenges at Wednesday’s debate. Not only is he tasked with presenting a coherent policy agenda, but Mr. Pence is also expected to help bridge the yawning gender gap between the president and Mr. Biden, who surpasses Mr. Trump by double digits among registered female voters in every national poll tracked by the Center for American Women and Politics.

But if he goes on the attack too hard, Mr. Pence risks feeding into the Democratic Party’s narrative that the Trump-Pence ticket is “sexist” and “racist,” Ms. Holman said.

In his official capacity, Mr. Pence also rarely interacts with, let alone debates, women like Ms. Harris. His immediate circle at the White House is dominated by white men. His Covid-19 Task Force is about two dozen men and just two women, including a woman of color. And in his personal capacity, he has noted that he would never have dinner alone with a woman who isn’t his wife.

“That may mean that he’s sort of tender footed,” Ms. Holman said, “because he doesn’t exactly know the way to approach an opponent like this.”

In Her Words is available as a newsletter. Sign up here to get it delivered to your inbox. Write to us at [email protected].

Joseph R. Biden Jr. traveled to Gettysburg, in the swing state of Pennsylvania, to deliver a call for national unity amid a public health crisis. Read the latest updates.