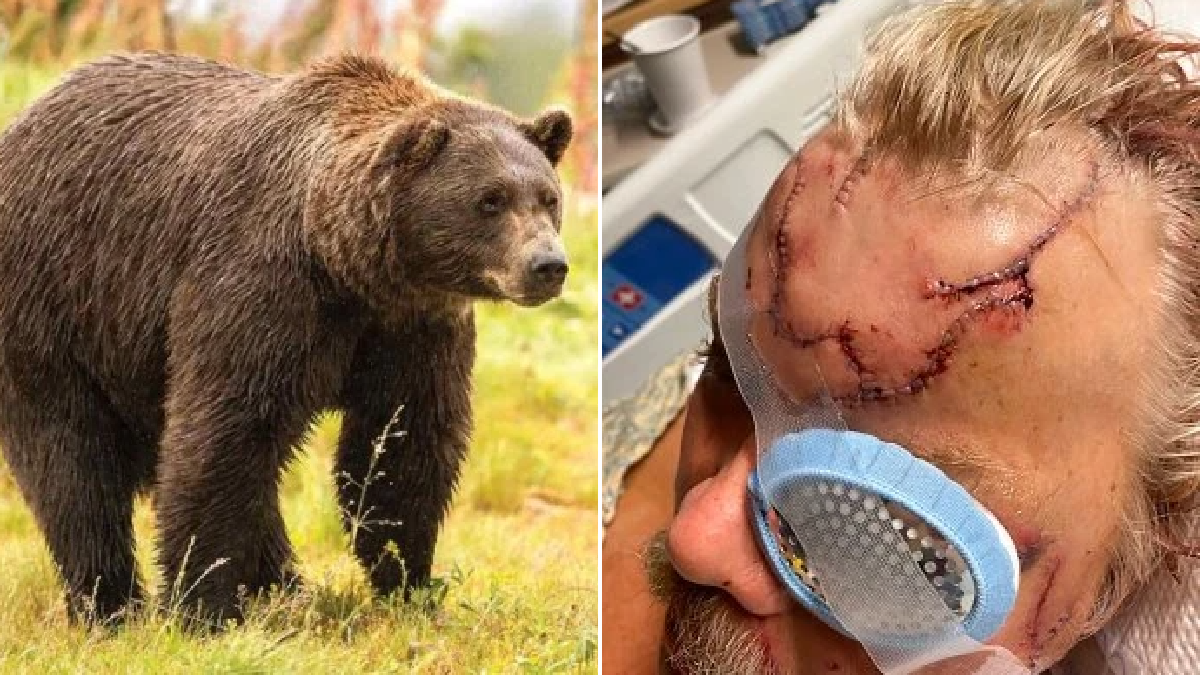 A man who was surveying land in a remote, wooded area of Alaska was viciously mauled by a big brown bear and is lucky to have escaped with his life.

Allen Minish said he was inputting numbers into a GPS unit for a real estate agent when he noticed the burly creature prowling 30 feet away from him.

‘I saw him and he saw me at the same time, and it’s scary,’ Minish said on Wednesday while at a hospital in Anchorage.

The bear on Tuesday charged at Minish and was in front of him within seconds. Minish said he tried to lose the bear through small spruce trees but that the creature plowed right through them.

Minish brandished the pointy end of his surveying pole at the bear in an attempt to fend it off, but it easily knocked the pole away, throwing Minish on the ground.

‘As he lunged up on top of me, I grabbed his lower jaw to pull him away,’ Minish recounted. ‘But he tossed me aside there, grabbed a quarter of my face.’

He continued to detail the horrific attack: ‘He took a small bite and then he took a second bite, and the second bite is the one that broke the bones… and crushed my right cheek basically.’

When the bear finally let loose, Minish said he turned his face onto the ground and covered his head with his hands.

The bear, which Minish described as larger than 300-pound black bears he had seen, then walked away.

Minish then realized he was in ‘pretty bad shape because I had all this blood everywhere’. He used his cell phone to dial 911 and struggled to give the dispatcher his GPS coordinates.

‘It took awhile to give them that because I had so much blood flowing into my eyes and on to the GPS, I kept having to wipe it all off,’ Minish said.

Minish tied his surveyor’s vest and T-shirt around his head to try to stop the bleeding and stayed on the call with the dispatcher until rescue crew arrived about 59 minutes later.

A rescue team member called Minish a hero given all the blood he lost. The crew carried him through a quarter mile of brush and swamps and he was then taken to a nearby airport and airlifted to Providence Alaska Medical Center.

Minish underwent a 4 1/2-hour surgery after suffering a puncture wound in his scalp revealing bone, a crushed jaw and lacerations. He got many stitches on his head and wears a patch over his right eye.

He said, ‘I guess I feel lucky’, after being told that being in his condition was better than being dead.

‘In all honesty, it wouldn’t have mattered either way. You know, if it killed me, it killed me. I had a good life, I’m moving on,’ Minish said. ‘It didn’t kill me, so now let’s move on to the other direction of trying to stay alive.’