It’s Tuesday. Get out the picnic basket: Governors Island opens on Wednesday, with daily ferry service. Ride free through Sunday!

Weather: You might need an umbrella this morning, but by afternoon it will be mostly cloudy, with a high in the lower to mid-60s.

Alternate-side parking: In effect until May 27 (Memorial Day). 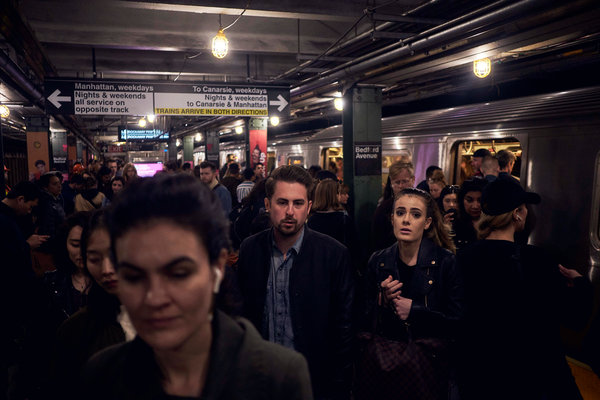 After years of angst over the L train shutdown — which became the L train slowdown — showtime arrived Monday morning for the construction-burdened subway line.

How would the Metropolitan Transportation Authority handle its first rush hour since part-time construction — on nights and weekends — got underway?

“Over all, I think it went well,” said The Times’s transit reporter, Emma Fitzsimmons, who along with the L’s 400,000 daily users was monitoring Monday’s rush hour.

At stake was how the M.T.A. would balance construction and service as it began a 15-month project on one of the city’s most vital subway lines.

The M.T.A. originally planned a full shutdown of the tunnel for 15 months — the so-called L train apocalypse — to repair Hurricane Sandy damage done to the tunnel the line uses to link Manhattan and Brooklyn.

But in January, Governor Cuomo, who controls the authority, essentially took over the project and announced a last-minute rescue plan that relied on a part-time construction schedule, with work affecting only one of the tunnel’s two tubes at a time.

That limits the work to nights and weekends, when service is reduced to every 20 minutes.

Work began Friday night. There were large crowds and some annoyance and confusion among riders over the weekend, but nothing apocalyptic.

The main challenge on Monday morning for the agency and the subway chief, Andy Byford, was to make sure workers would finish up overnight construction and remove themselves and their equipment in time for rush hour.

We go now to Emma:

So I take it the workers finished up in time for rush hour?

Yes, they have to get the workers and the equipment out to restart rush-hour service, and that’s going to continue to be a challenge.

If rush hour had started with only one tube open, it would have been a real disaster. But there were no major incidents, no trains stuck in tunnels, no catastrophes.

There was some overcrowding over the weekend?

Yes, there were lines just to go down the stairs onto the train platform, almost like the bouncer line at a nightclub.

But over all, far better than a full shutdown?

If you miss your train, you have to stand on the platform for at least 20 minutes. But as the governor’s office is saying, this is better than full closure, with no trains running at all.

Is it weird that Andy Byford has been so on the scene?

He’s been out there much of the weekend on the platform. This morning, he was keeping track on his phone of where the trains are. His eyes were red from lack of sleep, and he told our reporter Edgar Sandoval that he had gotten very little sleep.

So his job and his agency’s reputation are on the line here?

The M.T.A. as well as Mr. Cuomo and Mr. Byford, are all going to be under scrutiny over this project.

“We got everything done in terms of construction that we wanted to do,” Mr. Byford told us. “A lot of people were understandably very nervous. Over all it went very well. They cleaned up, cleared up. We tested trains through. There were no problems.”

The Bronx finally gets an independent book store. The Lit. Bar is opening in Mott Haven.

A pictorial tour of the old Penn Station, the jewel demolished a half-century ago.

Here is a look at The City Record, a daily newspaper the City of New York has been putting out since 1873.

[Want more news from New York and around the region? Check out our full coverage.]

A Bronx mother, struggling with homelessness, was arrested and charged with slashing her two young children with a razor. [ABC News]

At his Y in Park Slope, Mayor de Blasio encountered fliers campaigning against his possible run for president. [Patch.com]

Got some idle time? People are making money by reporting drivers of trucks and buses who idle their engines on city streets. [New York Post]

Journey to Randalls Island for a yoga session at the Sunken Meadow picnic area. 6:30 p.m. [Free]

The artist Jean-Luc Moulène discusses his latest exhibition, “More or Less Bone,” at SculptureCenter in Queens. 7 p.m. [Free with R.S.V.P.]

Take an herbalism for beginners class at the Alchemist’s Kitchen in Lower Manhattan. 8 p.m. [$25]

And finally: From lighthouses to tugboats, women on the water in New York City

Although women have long been underrepresented in the maritime profession, they have made their mark on the New York City waterfront.

There was Kate Walker, a lighthouse keeper who tended the Robbins Reef Lighthouse off Staten Island for more than 30 years. She became legendary for rescuing many sailors involved in shipwrecks or other accidents in New York Harbor.

More recently, Pamela Hepburn, a tug captain, in 1987 bought the Pegasus, a sturdy old tug, and operated it commercially for 10 years. She then restored it as a floating classroom and museum docked on the West Side of Manhattan.

And today, there are women like Jess Yeomans, who makes a living as a tugboat deckhand in New York Harbor, pushing barges and towing tankers.

All this is to say that City Lore, on the Lower East Side, is holding a forum — Women on the Waterfront — on Wednesday at 7 p.m., with panelists who include a Fulton Fish Market painter and a ferry captain who works in New York Harbor.

They will describe their experiences working on and around New York’s 520 miles of coastline and will take questions from the audience, with a reception to follow. The price is $5 in advance, $10 at the door.

The evening’s conversation will be moderated by Betsy Frawley Haggerty, a maritime journalist who holds a captain’s license and teaches sailing on City Island.

As for the scarcity of women on the water historically, Ms. Frawley Haggerty said, “It’s like being a truck driver — women weren’t aware they could even work in the industry.”

“If a woman took a job on the water, the men would say, ‘Really? A woman?’” she said. “But if you can do the job, you can earn their respect in 10 minutes.

“The more awareness we can create about it, the more opportunity there will be.”

It’s Tuesday — create your own opportunities.

In the early 1960s, I had a summer job at Newsweek replacing a very competent secretary whose desk included an electric typewriter.

I was a college student at the time, and my typing expertise was limited to a portable Smith Corona. I had to type copies of everything, and many of my attempts at correspondence ended up in the garbage. The typewriter was too fast, and I was too slow.

My father said I would lose my job if each day ended with originals, copies and carbon paper filling up the trash can.

So every Monday morning, I rode the Madison Avenue bus to work with my Smith Corona in hand, and every Friday I brought it back home.

The correspondence was still imperfect but it was better, and I kept the job for a second summer.

Corey Kilgannon is a Metro reporter covering news and human interest stories. His writes the Character Study column in the Sunday Metropolitan section. He was also part of the team that won the 2009 Pulitzer Prize for Breaking News. @coreykilgannon • Facebook