Lieutenant Colonel Alexander Vindman, a decorated army war veteran, was fired by Trump after his testimony. 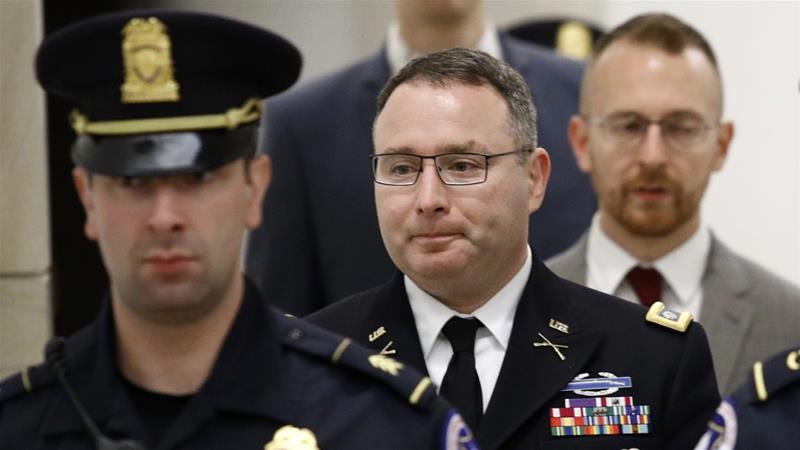 Lieutenant Colonel Alexander Vindman, a former White House aide who became a key figure in the impeachment of President Donald Trump, is retiring from the Army alleging “a campaign of bullying, intimidation, and retaliation” by Trump, according to a statement on Wednesday from his lawyer.

“After more than 21 years of military service, Lieutenant Colonel Alexander Vindman is retiring today after it has been made clear that his future within the institution he has dutifully served will forever be limited,” the statement from lawyer David Pressman read.

Trump fired Vindman, a decorated soldier who was the top Ukraine expert at the National Security Council, from his White House job shortly after he testified to the US House of Representatives impeachment inquiry in November that Trump made an improper demand of Ukrainian President Volodymyr Zelenskyy in a July phone call that became the centrepiece of the probe into the Republican president.

Vindman told a Democratic-run committee, “I couldn’t believe what I was hearing” in the phone call. Trump asked Zelenskyy to launch investigations into both Democratic rival Joe Biden and a widely debunked conspiracy theory that Ukraine, not Russia, was behind meddling in the 2016 US presidential election.

Vindman’s twin brother Yevgeny, also a lieutenant colonel who worked as a lawyer in the NSC, was fired simultaneously.

The firings came two days after the Republican-majority Senate acquitted Trump of charges that he abused his office and one day after he gave a victory speech branding his opponents as “evil”.

Trump described the impeachment process as a hoax, denying there was anything wrong in his push for Ukraine to open a politically embarrassing investigation into Biden’s family.