For the last four years, the White House has been a pet-free zone.

Donald Trump was one of only four US presidents not to have some kind of pet while in office, saying that walking a dog in the grounds of the presidential residence would feel ‘a little phony to me’.

He came after Barack Obama, who had two Portugese Water Dogs, Bo and Sunny.

Now it looks like there will be an animal presence in the White House again – and not just dogs, but a cat too.

CBS broke the news in a tweet, saying: ‘President-elect @JoeBiden and his wife @DrBiden won’t just be bringing their German shepherds, Major and Champ to the White House.

‘The Bidens tell us exclusively that soon they’ll be joined by a cat.‘

They had previously dropped a hint that a cat could be joining them.

‘I love having animals around the house.’

The cat may become the ‘First Cat’ in the same way Dr BIden will be the First Lady, but it won’t be the literal first feline.

Bill and Hillary Clinton had an adopted stray called Socks, while George W Bush had three dogs and a cat called India. 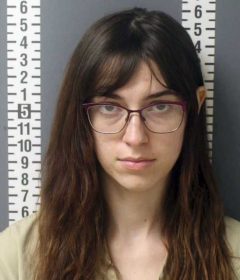 Woman accused of helping steal Pelosi laptop due in court