In Undervaccinated Arkansas, Covid Upends Life All Over Again

While much of the nation tiptoes toward normalcy, the coronavirus is again swamping hospitals in places like Mountain Home, in a rural county where fewer than one-third of residents are vaccinated. 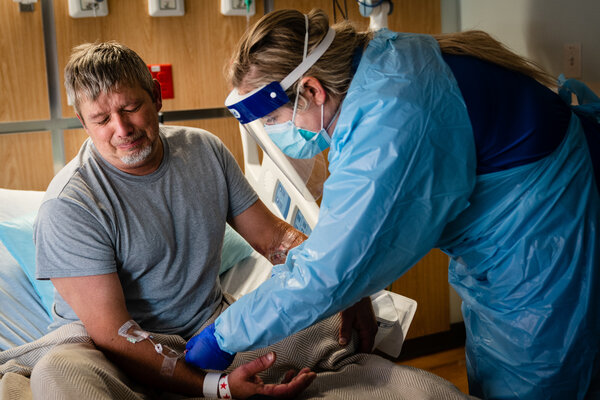 MOUNTAIN HOME, Ark. — When the boat factory in this leafy Ozark Mountains city offered free coronavirus vaccinations this spring, Susan Johnson, 62, a receptionist there, declined the offer, figuring she was protected as long as she never left her house without a mask.

Linda Marion, 68, a widow with chronic pulmonary disease, worried that a vaccination might actually trigger Covid-19 and kill her. Barbara Billigmeier, 74, an avid golfer who retired here from California, believed she did not need it because “I never get sick.”

Last week, all three were patients on 2 West, an overflow ward that is now largely devoted to treating Covid-19 at Baxter Regional Medical Center, the largest hospital in north-central Arkansas. Mrs. Billigmeier said the scariest part was that “you can’t breathe.” For 10 days, Ms. Johnson had relied on supplemental oxygen being fed to her lungs through nasal tubes.

Ms. Marion said that at one point, she felt so sick and frightened that she wanted to give up. “It was just terrible,” she said. “I felt like I couldn’t take it.”

Yet despite their ordeals, none of them changed their minds about getting vaccinated. “It’s just too new,” Mrs. Billigmeier said. “It is like an experiment.”

While much of the nation tiptoes toward normalcy, the coronavirus is again swamping hospitals in places like Mountain Home, a city of fewer than 13,000 people not far from the Missouri border. A principal reason, health officials say, is the emergence of the new, far more contagious variant called Delta, which now accounts for more than half of new infections in the United States.

The variant has highlighted a new divide in America, between communities with high vaccination rates, where it causes hardly a ripple, and those like Mountain Home that are undervaccinated, where it threatens to upend life all over again. Part of the country is breathing a sigh of relief; part is holding its breath.

While infections rose in more than half the nation’s counties last week, those with low vaccination rates were far more likely to see bigger jumps. Among the 25 counties with the sharpest increases in cases, all but one had vaccinated under 40 percent of residents, and 16 had vaccinated under 30 percent, a New York Times analysis found.

In Baxter County, where the hospital is, fewer than a third of residents are fully vaccinated — below both the state and the national averages. Even fewer people are protected in surrounding counties that the hospital serves.