Home » Americas » In New Hampshire, Trump urges voters to save 'democracy from mob'

In New Hampshire, Trump urges voters to save 'democracy from mob'

Trump narrowly lost New Hampshire to Democrat Hillary Clinton in 2016, and is trailing Biden there this year. 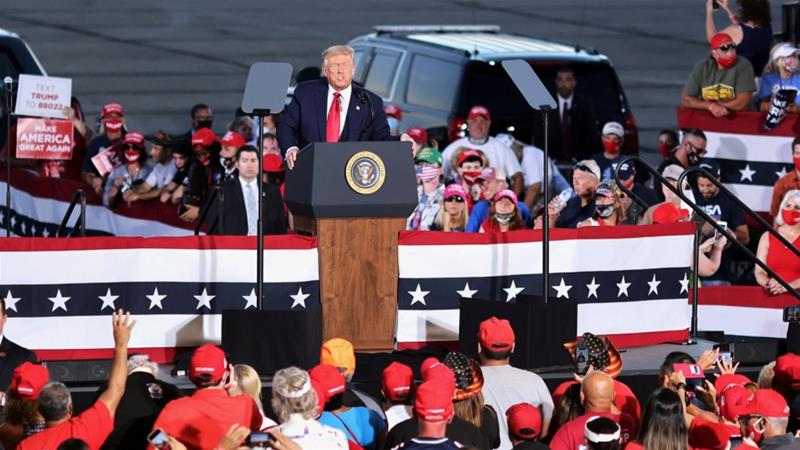 US President Donald Trump has described anti-racism protesters as “rioters” and “looters”, and claimed his administration was all that stood “between the American people and the left-wing mob”.

During a campaign stop on Friday in the politically important state of New Hampshire, Trump acknowledged “there’s so much racial hatred” in the US but blamed this on some news channels.

Trump, who has emphasised a “law and order” theme to motivate his political base, is trailing former Vice President Joe Biden, the Democratic presidential nominee, in national polls ahead of the November 3 election.

But he told the crowd assembled in an airport hangar in Londonderry, New Hampshire, he was confident of victory.

“Does anyone have any doubt?” he asked to a chorus of support.

Much as he did on Thursday during his White House address to the Republican convention, Trump claimed to be singlehandedly protecting the country from Democratic anarchists.

“We are all that stand between the American people and the left-wing mob,” he said. “If you want to save democracy from the mob, then you must vote to defeat an extremely poor candidate.”

He also denounced as “thugs” protesters who sought to disrupt his White House speech on Thursday night and said Senator Rand Paul could have died when he was swarmed by protesters afterwards.

Paul on Friday said he was attacked by an “angry mob” of more than 100 people near the White House and had to be rescued by the police. 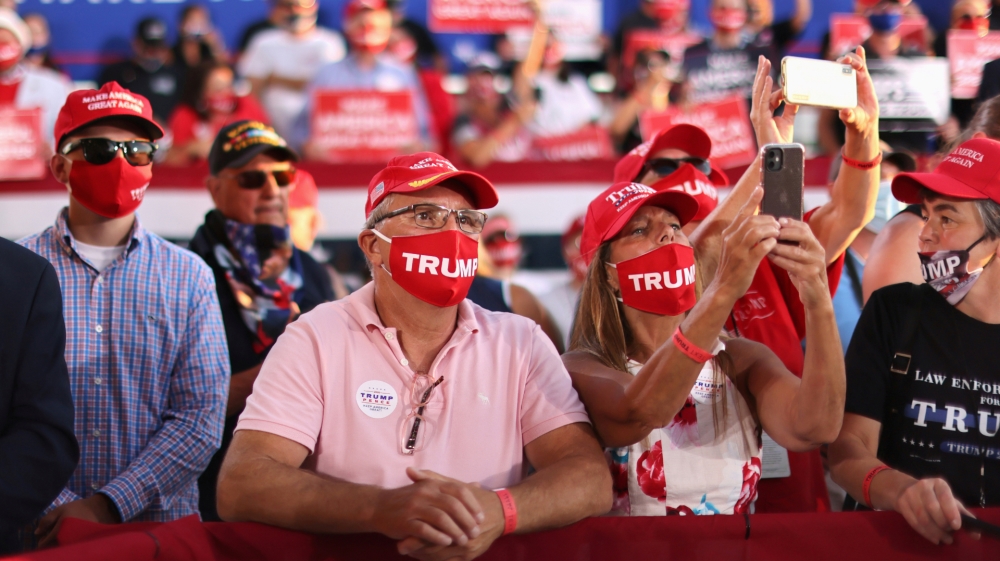 Trump has been criticised for not showing empathy in the wake of shootings and killings of Black men by police, including George Floyd, who died in police custody in Minneapolis in May, sparking anti-racism demonstrations worldwide.

Thousands of people also took part in a march in Washington, DC on Friday to denounce racism.

Biden and his running mate, vice presidential nominee Senator Kamala Harris, said Trump was making America less safe with his rhetoric and his handling of the coronavirus pandemic.

“The President incites violence, inspires white-supremacist shooters, and his failed COVID response is costing thousands of lives per day. When you look at the world right now, ask yourself: Do you feel safe in Trump’s America?” Biden tweeted.

“Trump has been obsessed, I think, with spreading fear and using division to protect his own ego, and more fundamentally to erode the foundations of the democracy that he swore to defend,” Harris said at a fundraiser on Friday.

Trump narrowly lost New Hampshire to Democrat Hillary Clinton in 2016, and is trailing Biden there this year.

In his speech, he went over some of his favourite themes, including his insistence that Mexico would pay for a wall along the US border and that Democrats would try to slash funding for law enforcement.

And he again said the coronavirus, which has killed more than 180,000 Americans already, was under control. “Hopefully we’re at the end,” he said.