Home » Americas » In Colorado, Fiery Political Novice Aims for a Seat in the House

LOMA, Colo. — Lauren Boebert, the feisty hard-right Republican House candidate, had just finished regaling a crowd clad in red, white and blue at a livestock sale barn here on the Western Slope with dire warnings that “our country is on the line” in the coming election and “if we lose America, we lose our freedoms.”

“We can’t sit back and let the Democrats — the liberals and progressives — have their way, because they will destroy everything we have,” Ms. Boebert declared on a recent weekend, holding forth as she paced the center of the auction ring, her trademark Glock 26 snugly holstered on her hip.

Like the rest of the roughly 200 flag-waving attendees, outfitted in Trump gear and camouflage, Traci Tavares of nearby Clifton was enthralled.

“I like what she says,” Ms. Tavares said as she exited. “She stands for us.”

But whether Ms. Boebert, who expressed some interest in the baseless pro-Trump QAnon conspiracy movement before she beat Representative Scott Tipton, the five-term incumbent, to get into the November election, will stand for them on Capitol Hill is yet to be determined.

Despite the decidedly conservative tilt of the sprawling, 29-county district — composed of pockets of high-end ski town liberalism like Aspen and small, economically pressed ranching and farming communities — her race with Diane Mitsch Bush, a former Democratic state lawmaker and university professor, is close. The contest is not only a clash of cultures in a state that has steadily grown more liberal, but it is also an example of why Republicans are struggling to regain ground in the House.

Weighed down by President Trump’s poor approval ratings during a pandemic and a recession, they have both struggled to reclaim seats that Democrats seized in 2018 and been forced to defend districts like Colorado’s Third, which should have remained safely in Republican hands. It is not clear whether Ms. Boebert, 33, an outspoken high school dropout who runs a gun-themed bar in the town of Rifle where the waitresses openly carry firearms, can hold onto it. 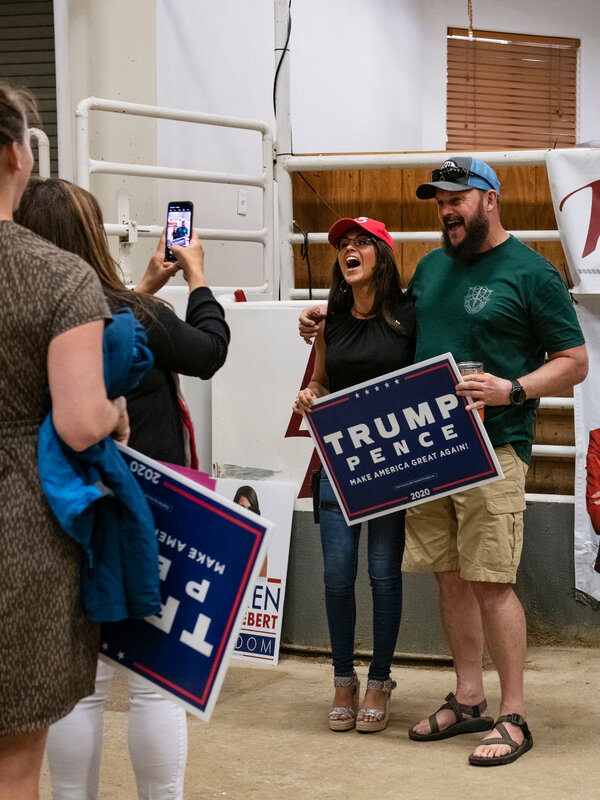 In the most recent sign of the race’s increasing competitiveness, national Democrats reserved more than $600,000 in airtime in the contest between Ms. Boebert, who bills herself as the answer to creeping socialism and promises to shake up Washington, and Ms. Mitsch Bush, who is offering herself as a pragmatic legislative veteran eager to get to the nuts and bolts of addressing pressing state issues rather than make national waves.

“You can’t be going to Congress thinking you are going to be a big celebrity,” said Ms. Mitsch Bush, 70, who lives in Steamboat Springs and whose well-funded advertising campaign portrays Ms. Boebert as too extreme for the district. “You need to roll up your sleeves. You need to calmly lead.”

Ms. Boebert upset Mr. Tipton in June after a campaign in which she accused him of siding with Democrats too often and neglecting the district, which encompasses a huge swath of the western portion of the state, from Pueblo in the south to Steamboat Springs in the northwest.

Ms. Boebert said she was motivated in part by Mr. Tipton’s reluctance to embrace a ballot initiative to block Colorado from entering a national compact in which states agree to award their presidential electoral votes to the winner of the national popular vote. In an interview, she said the compact would allow populous states like California to “steal” Colorado’s electoral votes and boasted that she had been a top gatherer of signatures needed to get the referendum on the ballot. But she received what she described as an arrogant brushoff from Mr. Tipton’s office.

Ms. Boebert had already established something of a name for herself. In September 2019, she drove nearly four hours along I-70 from Rifle to a rally in Aurora to confront Beto O’Rourke, then a Democratic presidential contender, about his debate pledge that “Hell yes, we are going to take your AR-15, your AK-47.”

“I am here to say, ‘Hell no, you’re not,’” declared Ms. Boebert, who said that at 5 feet tall and 100 pounds, she needed a gun for self-defense. Video from the event attracted national attention and a new conservative celebrity was born.

She drew more attention in May when, appearing on the radio show of a QAnon believer, she expressed support for the conspiracy movement, saying that it reflected that more Americans were embracing conservatism. She has been trying to walk that back ever since, saying that she does not believe in QAnon and that it is mainly the news media that insists on raising the issue.

“I am not a follower of the group,” she said, and the subject did not come up at her “freedom rally” in Loma.

Ms. Boebert seems more like a rebooted version of the Tea Party movement, with her frequent references to constitutional conservatism and her low regard for government programs, with combative Sarah Palin-esque flourishes thrown in.

She has an unusual profile for a congressional candidate. The mother of four boys, she quit high school her senior year to begin her family and ended up earning a G.E.D. certificate. Ms. Boebert talks openly about the economic struggles faced by her and her mother — who she described as a reliable Democratic voter until 2016 — and how she took a management role at the local McDonald’s to earn money, rather than spend a few more hours in biology class.

“I learned firsthand that I could do a better job of taking care of myself than government ever could,” she said. “I wish that more members of Congress had the life experiences that I’ve had.”

But her political opponents have seized on some of those experiences, complicating her race. Local news outlets disclosed that Ms. Boebert had multiple brushes with the law, including a citation for disorderly conduct at a music festival in 2015, when she was accused of interfering with the arrest of some minors for underage drinking, and an unsafe vehicle charge after a truck accident in 2016.

In both instances, she failed to show up for court appearances and warrants were issued, leading to arrests and brief stops in jail. Ultimately, the charge was dismissed in the disorderly conduct case and a $100 fine was issued in the wake of the accident.

Ms. Boebert shrugged off the episodes, joking that her mug shot was “so much better than my driver’s license photo.” And she said she still took pride in helping those arrested teenagers, arguing that she was merely making sure they were advised of their rights.

“I saw what looked to me as an injustice,” she said. “I am proud that I have taken my feistiness and directed it to a good cause.”

But the run-ins with the law did not stop there. Ms. Boebert drew a cease-and-desist order from the county this year for opening her restaurant to indoor dining despite quarantine restrictions, paving the way for accusations that she does not believe the laws apply to her.

“She says she supports the Constitution, but she seems to support only the parts she likes,” said Ms. Mitsch Bush, who was endorsed Friday by President Barack Obama.

Her arrests did not seem to trouble Ms. Boebert’s supporters in Loma.

“Everyone makes minor mistakes,” said Woody Walcher, who praised her authenticity as he carried a huge Trump 2020 flag.

The race promises to be bruising in its final weeks. Dave Wasserman, the House race expert at the nonpartisan Cook Political Report, recently shifted the seat from “likely Republican” to “lean Republican.” A major factor will be how Mr. Trump, who endorsed Ms. Boebert the night she beat Mr. Tipton and invited her to his White House convention speech, performs in a district he easily carried in 2016 but where his popularity has slid.

If she makes it to Washington, Ms. Boebert vowed to be heard — though she realizes her sidearm will not be allowed in the Capitol.

“I’m aware there is plenty of security there,” she said.