Questlove has described Madison McFerrin’s music as “soulappella.” DNA might be partially responsible. The singer is the daughter of Bobby McFerrin, the jazz vocalist, and the granddaughter of Robert McFerrin, Sr., the first black man to sing at the Metropolitan Opera. Ms. McFerrin, 27, a graduate of Berklee College of Music, is currently working on a non-a cappella record with her brother, musician/producer Taylor McFerrin. She is also finishing up a residency at C’Mon Everybody in Brooklyn; her final performance there will be Jan. 30. Ms. McFerrin lives in Bedford-Stuyvesant with her boyfriend and manager, Ned Levy. On Sundays, they try not to stray far from their kitchen.

WRITE IT DOWN Usually Sundays are a late start. I don’t get up until 10:30 or 11, depending on how long I was out the night before. The first thing I do is write in my journal. Lots of times I’ll write about my dreams, or what I want to do that day, or how the day before went. 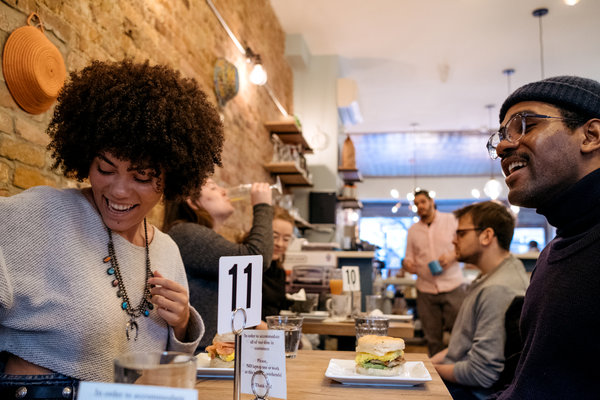 EGGS EITHER WAY If I make breakfast, I’m going to make something like potatoes and poached eggs and avocado. But sometimes I like to go out, to this spot called Brown Butter in the neighborhood. They have a breakfast sandwich on a biscuit there that’s really, really good. I think it’s eggs and avocado. Sometimes I’ll get bacon on it but not all the time.

DEPENDING ON MOOD If I’m feeling like I want to be around people, I might go to a museum, maybe hit up the Whitney or the Brooklyn Museum. I don’t do that enough. Most of the time I’ll come home and work on some music or try to go through my schedule and see what needs to be done for the week. Museums can be crowded on Sundays, and I try to avoid crowds.

STUDIO MODE If I’m going to work on music, I’m just playing the piano and singing. I have an upright Baldwin that was actually my oldest brother Taylor’s, but he couldn’t keep it in his apartment because he has too much stuff. If I’m not at the piano there’s some YouTube videos I can check out to help me on the piano. I’ll look at those. And I might check into some historical things on the internet if I’m writing music. I also just got some new software that I need to learn — Ableton Push 2.

CATCH OF THE DAY Sometimes I’ll enter the madness that’s Whole Foods on Gowanus. But not always. Ned and I both really like cooking, so one place we usually try to go on Sundays is our fishmonger friend’s place in Bed-Stuy. It’s called Shipwreck Seafood Boutique. The guy who owns it, Joey Lugo, sells everything — salmon, halibut, grouper, tuna, the whole kit and caboodle.

KEEPING MAMA HAPPY I have another brother who lives in the building, in the basement apartment. His name is Jevon and here’s a little factoid: He’s just finishing up in “Hamilton,” as the understudy for Hamilton and all the other dudes who aren’t Burr. Jevon has a dog named Mama and sometimes if he needs us to we’ll walk her for him. Mama is a pit bull. She’s very sweet.

THE EATINGS Ned and I make dinner together. We split up the cooking duties pretty evenly, like we figure stuff out before we start. Who does what depends on if somebody has a particular vision about what they want to cook, maybe from a cookbook. We have a nice collection of them. When I went to college my mom made me this binder of recipes that she really loves. My whole family is really big on eating. We call ourselves “the Eatings.”

ENTERTAINMENT Like most folks these days we’ll throw something on our projector while we’re eating. We just finished up “Narcos: Mexico” on Netflix so we’re moving on to something else entertaining, I’m not sure what yet. We try to watch informative things, sometimes a documentary that we can talk about afterward.

UNWIND Sometimes we’ll have a show or something to go to on Sunday night. If not we’re usually just chilling after dinner, going over stuff that needs to get done for the next day. It’s the wind-down situation.

PAGES Then we generally read before we go to bed. Right now I’m reading “Barracoon” by Zora Neale Hurston and also some books about how to accomplish what I’m trying to accomplish as an independent musician. Ned gave me “Made to Stick,” which I need to get through. It’s about marketing stuff. Bedtime really varies. We try to be in bed by midnight. But if we’re asleep by 1:30 or 2 a.m., that’s a good night.