In a funeral that served as both a celebration of life and a condemnation of racist policing in America, the family of Andrew Brown Jr. was joined in Elizabeth City, N.C., on Monday by the relatives of other Black men killed by police officers.

Mr. Brown, 42, was killed by Pasquotank County sheriff’s deputies on April 21 while they tried to arrest him during a drug raid. But many details of the shooting remain unclear, and last week a North Carolina judge declined to publicly release the body camera footage for at least 30 days. 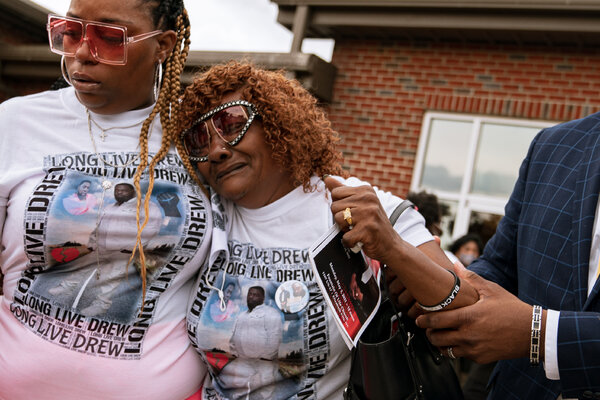 Other guests at the funeral, including the Rev. Al Sharpton and Ben Crump, a lawyer for the family, compared the killing of Mr. Brown to the deaths of several other Black people at the hands of police officers, from Mr. Floyd to Breonna Taylor.

“Here we are again,” said Bakari Sellers, a lawyer and former South Carolina state representative. “To many people this is just another Black body, but to us it’s a brother, a father, a nephew, a loved one.”

The funeral largely served as a call to action, though some of Mr. Brown’s family members used the occasion to remember him as a loving father, or a cousin to look up to.

Jha’rod Ferebee, one of his sons, said that his father was his “best friend” and that “every time you seen me, you seen him.” Khalil Ferebee, another son, said that the circumstances of the gathering were grim, but that Mr. Brown would have loved to see some of his favorite people gathered together.

Mr. Brown was killed one day after a Minneapolis jury convicted the former police officer Derek Chauvin of murdering Mr. Floyd. During Mr. Brown’s funeral, his death was put alongside a list of names dating as far back as Emmett Till, a 14-year-old who was lynched in Mississippi in 1955.

“We thought that George Floyd represented that we were going to stop this unnecessary, unjustifiable killings of Black men,” said Mr. Crump, who is also representing Mr. Floyd’s family.

Mr. Crump continued to demand the full release of body camera footage — the family has been shown a 20-second clip — that could shine light on Mr. Brown’s death. He was shot five times and killed by a shot to the head, according to a private autopsy.

City-owned video that was obtained by WAVY, a Virginia-based television station, showed that deputies with the Pasquotank County Sheriff’s Office were dressed in tactical gear before they pulled into Mr. Brown’s driveway. Seven deputies were initially placed on administrative leave.

During the funeral on Monday, the Rev. Dr. William J. Barber II, the former president of the North Carolina N.A.A.C.P., told Mr. Brown’s family to take comfort in the level of attention and support from across the country. Protesters have regularly gathered in Elizabeth City since his death.

“Andrew got brothers and sisters, white, Black, brown, Asian, gay, straight — all of them coming together,” Dr. Barber said. “I want you to be comforted in that.”

Mr. Sharpton said the failure to release the body camera footage was a “shell game,” and called on the Justice Department to investigate the shooting and the perceived lack of transparency in the case.

“The challenge of these times is how we’re going to deal with policing in America,” he said, adding, “I know a con game when I see it; release the whole tape and let the folks see what happened to Andrew Brown.”