Home » Americas » He Honors Black New Yorkers. Not All Black Activists Are Thrilled.

He Honors Black New Yorkers. Not All Black Activists Are Thrilled.

Last March, a crowd gathered in Downtown Brooklyn to celebrate a new name for Gold Street: Ida B. Wells Place. Jacob Morris, the tireless activist behind the renaming effort, addressed the group.

“Yeah, almost,” someone in the audience commented, laughing.

Mr. Morris has not achieved success by mincing words. A force behind the renaming of some 40 streets and monuments in New York after prominent Black New Yorkers, including the performer Paul Robeson, the civil rights activist Ella Baker and the Supreme Court justice Thurgood Marshall, he likes to talk and he likes to nudge, both of which come in handy when dealing with community boards and city bureaucracies. But his nonstop zeal can also rub people the wrong way, perhaps most notably in Harlem, where he is the head (and only member) of the Harlem Historical Society.

Mr. Morris proceeded with his speech, enumerating his other renaming accomplishments before getting to the woman of the hour, Ms. Wells.

“It wasn’t just that she lived here,” he said. “It was that her time here in Brooklyn was critical to her growth, as an activist, as an author.” In Brooklyn, Mr. Morris explained, Ms. Wells banded together with a group of local women to help finance her groundbreaking journalism exposing the horrors of lynching.

“This is not the end,” Mr. Morris continued. “This is the beginning. We want more.”

For more than 15 years, Mr. Morris has been on a mission to increase Black representation in public spaces. The end result tends to look impressive, but the work itself is tedious, requiring hundreds of hours at local government meetings that few have the patience to attend, much less engage in. A mix of curiosity, conviction and free time make Mr. Morris perfect for this kind of work.

Earnestine Morris, his wife, puts it this way: At any public lecture, Mr. Morris is the guy with the question afterward, hand jutting up in the air.

And he has spun his quirks into a vocation, while sporting Negro League baseball jackets that he bought on eBay (“I get a lot of compliments”), despite the fact that he is white.

“Almost every month Jacob finds a reason to be agitated, excited, outraged and militant, and usually he’s quite right in his concerns,” said David Levering Lewis, a Black historian who has won two Pulitzer Prizes for his biographical work on W.E.B. Du Bois. About 10 ago, he and Mr. Morris met over shared causes: opposition to a New York Public Library expansion plan and interest in commemorating Du Bois in New York City. Now Mr. Lewis is part of Mr. Morris’s inner circle, receiving frequent phone calls and email blasts. 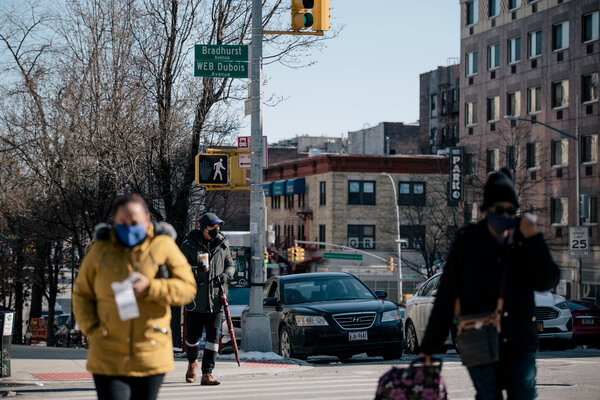 If Mr. Morris is persistent in communications, he is even more relentless before community boards.

“His passion can wear on you,” said Brooklyn’s Community Board 2 chairman, Lenny Singletary, who has dealt extensively with Mr. Morris and his squeaky-wheel ways.

In 2019, Mr. Morris visited the board several times to pitch renaming Willoughby Square, also in Downtown Brooklyn, to Abolitionist Place Park, because of Underground Railroad sites on neighboring streets. “Like clockwork he would come back and remind us about his cause,” Mr. Singletary said. The board has since authorized the renaming, but the city has yet to recognize it.

Mr. Morris has a stunning track record on this count, choosing battles he can win and pursuing them doggedly until he does. Getting a street renamed can take months, if not years. Though the process varies slightly in each district, proposals generally require petitions signed by 100 or more community members, accompanied by a detailed biography of the individual to be honored and a description of the person’s relationship to the area. Materials are presented for a vote to the district’s committee for overseeing street names and then, if successful, are presented for a full board vote. If the board votes in favor, the proposal goes to the City Council and, finally, to the mayor.

There is no compensation for this work. Mr. Morris and his wife live off their respective pensions from the military and the city.

Any city resident can propose renaming a street, but few do. “Maybe he is taking up all the airtime, but he doesn’t have competition,” Mr. Singletary said.

But Mr. Morris’s solo show worries some advocates for social change. “Harm is done to communities of color when white people see themselves as allies but take up all of the space,” said Derrick C. Dawson, an organizer and trainer for Crossroads Antiracism Organizing and Training. “Instead of using your power to create equal access, you are using your power to further center yourself in a way that’s difficult to criticize because you’re getting the work done.”

And although Mr. Morris’s work is largely appreciated — and any antics at least tolerated with some humorous discomfort — he does have at least one detractor, in Central Harlem. An active resident there, Julius Tajiddin, took issue with how Mr. Morris planned to collaborate with Touro College, Mr. Morris’s former employer, to commemorate the country’s first Black pharmacy owner with a street renaming in Harlem. “Like he’s the only person that knows how to go about getting a street co-named,” Mr. Tajiddin said.

Each man takes credit for the idea and has accused the other of improperly soliciting payment from Touro for the street renaming project.

As Mr. Morris tells it, once Touro had agreed to co-sponsor an unveiling ceremony, Mr. Tajiddin got involved and complicated matters, and the project stalled.

Mr. Morris was not always so engaged in local politics or Black history. But he does identify with ethnic oppression. Born in 1947 into a Jewish Greek family in Astoria, Queens, Mr. Morris grew up with an intimate understanding of the Holocaust’s destruction. His parents and one uncle were the only family members to escape deportation to concentration camps from the city of Thessaloniki, during the German occupation of Greece. “I got no relatives,” Mr. Morris said.

Still, Ms. Morris, a retired social worker from Selma, Ala., who is Black, said her husband knows more about his ancestors than she knows about hers.

Starting in the 1970s, Mr. Morris got into real estate development, owning several buildings, as well as the Rare Bird video store chain, all in SoHo. During that time, he met his wife and they had a son, Lincoln, named after the president. But they hit hard times when Mr. Morris learned that his loft buildings didn’t have the Certificate of Occupancy required for landlords to collect rent, and his tenants staged a rent strike. Mr. Morris ultimately filed for bankruptcy in the late 1990s.

He got his first taste of local politics when Lincoln was in middle school, and Mr. Morris realized that the city’s public schools were not required to count the test scores of students with learning disabilities toward their official averages. He felt like the practice gave schools an incentive to funnel low-performing students, most of them of color, like his son, into special education programs.

“It really just messed with my head,” Mr. Morris said. In 1998, he led a class-action lawsuit against the Board of Education that ended the exclusion of the reading and math scores of special education students in the city.

That experience led to a job as the director of the Parent Studies Institute at Touro College, where Mr. Morris learned to write grant applications. In 2002 he began working on a proposal to disseminate information on New York City’s role in the Underground Railroad. It took him three years to win the grant for the New-York Historical Society, and in the intervening years of research, Mr. Morris acquainted himself with the lesser-known figures in New York’s abolitionist history. He wanted to tell their stories.

He also learned about famous Black figures with little-known footprints in New York City, like Frederick Douglass, who, during his escape from slavery, had landed by boat at the Chambers Street dock in Manhattan.

In 2005, Mr. Morris brought before Community Board 1 in Lower Manhattan a proposal to name that block Frederick Douglass Landing. It passed in committee by one vote. “If the vote had gone the other way, I never would have become a street namer,” Mr. Morris said. His success paved the way for more projects.

In 2007, he revived the Harlem Historical Society, which had been dormant since 1999, to help his cause. Aside from its board, the organization has just one member, Mr. Morris, which troubles his friend Mr. Lewis, the biographer. “Not because I think that a white person should not enjoy a role in that organization,” he said, but because “it seems to me that it would have a kind of prima facie validity if Jacob had recruited a good secretary, a researcher, what have you.”

For Mr. Dawson of Crossroads, the organization’s sparseness presents a missed opportunity to enfranchise New Yorkers of color. The Harlem Historical Society might hold classes on helping people in Harlem navigate city government, he suggested. “The solution should be creating space for us and making sure those doors are open for others, not barging in yourself and being the center of attention while we’re still locked out.”

At a higher level of city government, Mayor Bill de Blasio has rushed to reassign commemorative sites around the city to diverse figures without problematic biographies. But the process has not been smooth. When the Women’s Rights Pioneers Monument in Central Park was first announced, for example, it was to feature two white suffragists, Susan B. Anthony and Elizabeth Cady Stanton. But there was an outcry among activists that Black women had been excluded, and Mr. Morris helped lead the charge for a redesign. Ultimately, Sojourner Truth was added to the monument, which was unveiled last summer.

Three years ago, farther north in Central Park, the De Blasio administration removed a statue of J. Marion Sims, a gynecological pioneer who made breakthroughs by operating without anesthesia on enslaved women. It was to be replaced by a monument honoring those women, and in a chaotic selection process, the city appointed the sculptor Vinnie Bagwell to the project the following year. But the Department of Cultural Affairs has lagged in kicking off the work.

Mr. Morris is on the case, having befriended Ms. Bagwell when she won the bid. “Knowing him is an extraordinary advantage because New York City is so vast,” she said. “Like, I still don’t have an agreement. Is there somebody I can call besides the mayor?”

When it comes to renaming streets and erecting culturally relevant statues, Mr. Morris sees some opportunity in electing a new mayor.

“As the front-runners,” he said, “I see Scott Stringer and Eric Adams. I know both of them, they know me.”

Mr. Morris hopes either would give a fair hearing to the many initiatives he is pushing. Those include: Establishing a freedom trail linking abolitionist sites in Manhattan; naming a street for Maya Angelou; renaming Columbus Park for Amerigo Vespucci, since Christopher Columbus is said to have introduced chattel slavery into the Western Hemisphere; and removing the name “Riker” — that is, Richard Riker, an enabler of 19th-century bounty hunters who kidnapped free Black people — from Rikers Island.

Mr. Morris has been working on some of these projects for over a decade. “If I’m responsible for New York City having a freedom trail,” he said, “that’ll be huge.” He paused. “That’ll be a legacy thing for me.”