Home » Americas » Harvey Schlossberg, Cop With a Ph.D. in Defusing a Crisis, Dies at 85

Harvey Schlossberg, Cop With a Ph.D. in Defusing a Crisis, Dies at 85

Dr. Harvey Schlossberg, a former New York City traffic cop with a doctorate in psychology who choreographed what became a model law enforcement strategy for safely ending standoffs with hostage takers, died on May 21 in Brooklyn. He was 85.

His death, at a hospital, was caused by cardiopulmonary arrest, said his wife, Dr. Antoinette Collarini Schlossberg.

The need for a standard protocol for hostage situations became more pressing in 1971 after the botched rescue of guards during the Attica prison riots in upstate New York. The next year, captives were taken in a Brooklyn bank robbery (the inspiration behind the 1975 Al Pacino film “Dog Day Afternoon”) and Israeli athletes were seized and massacred by Palestinian terrorists at the Munich Olympics.

In a pioneering training film he made for the New York Police Department in 1973, Harvey Schlossberg said that in a hostage situation, police officers “all believed, ‘If you gave me the right gun with the right bullet, I can put everybody out.’”

“But I don’t think it works that easy,” he said. “That’s a Hollywood thing.”

Instead, he counseled patience and “crisis intervention therapy.” Delaying tactics, he said, allowed more time for the criminals to make mistakes and, just as crucially, to develop a rapport with their victims, leaving the hostage-takers less likely to harm them. 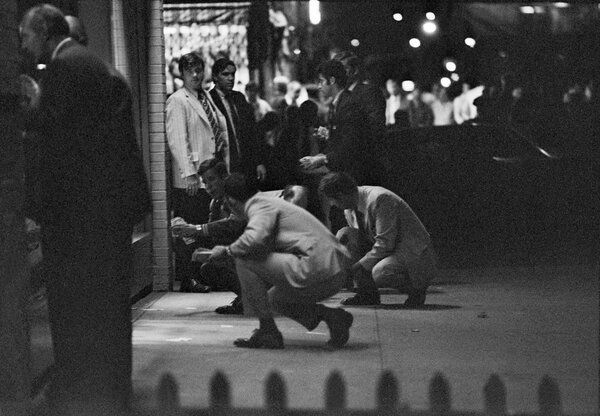 “Harvey faced an uphill battle getting cops to ‘negotiate with killers,’ because for 130 years the N.Y.P.D.’s official M.O. in barricade situations had been to issue ultimatums, throw in smoke and tear gas, and, if necessary storm the building,” Chuck Wexler, executive director of the Police Executive Research Forum, a law enforcement think tank, said in an email. “Many lives were lost. Harvey changed that.”

His tactics were successful in early 1973 during a 47-hour standoff at a Brooklyn sporting goods store that had begun with the murder of a police officer. It ended with the escape of nine hostages and the surrender of four gunmen.

The department then established its hostage negotiating team at the initiative of Inspector Simon Eisdorfer, with Dr. Schlossberg developing the team’s strategy. Frank Bolz, a lieutenant in the Emergency Services Unit, became its first commanding officer.

Unless shots were fired or the hostage-taker was seen or heard specifically threatening a victim, Dr. Schlossberg recommended containing the situation to a confined physical space, opening negotiations, maintaining communications with the gunman and waiting him out to win his confidence and give him an alternative course of action, which might ultimately gain the hostages’ release.

“When they talk about de-escalation, he changed the world of policing,” Mr. Bolz said in a phone interview. “He trained me and sold me on it. He was the architect, and I was the practitioner.”

Dr. Schlossberg was originally assigned as a traffic officer in the accident investigation unit. But one day Commissioner Patrick V. Murphy was perusing a printout of personnel and serendipitously discovered a hidden asset: an officer with a doctorate in psychology. Dr. Schlossberg was soon transferred to the Medical Bureau to perform emotional testing that would determine the well-being of prospective and current police officers. He was promoted to director of psychological services in 1974.

He went on to coach thousands of officers in hostage negotiating. One was a Boston police sergeant, William Bratton, who would rise through the ranks to lead the police departments in Boston, Los Angeles and New York City.

Dr. Schlossberg’s hostage-negotiating strategies accounted for all sorts of eventualities. He would advise, for example, against summoning a spouse or a priest to the scene of a crisis — a Hollywood tactic, he said, that often backfired because the hostage-taker’s rage might be rooted in family tension to begin with.

Harvey Schlossberg, a grandson of immigrants from Eastern Europe, was born on Jan. 27, 1936, in Manhattan to Harry and Sally (Frankel) Schlossberg. His father was a mechanic, his mother a homemaker.

After graduating from Eastern District High School in Brooklyn, he earned a bachelor’s degree from Brooklyn College in 1958 as a chemistry major and joined the Police Department at $4,000 a year (about $37,000 today) to pay for his postgraduate studies.

When he wore his uniform home for the first time, his mother didn’t recognize him. He barely recognized himself. “I felt taller than usual,” he recalled in his memoir.

For his graduate studies he took night courses, leading to a master’s degree in psychology from Long Island University and a doctorate in clinical psychology from Yeshiva University’s Graduate School of Arts and Sciences in 1971.

His marriage to Cynthia Marks ended in divorce.

In addition to his wife, Dr. Collarini Schlossberg, who is chairwoman and associate professor of the Division of Criminal Justice, Legal Studies and Homeland Security at St. John’s University in Queens, he is survived by four sons from his first marriage, Mark, Alexander, James and Steven Schlossberg; a daughter, Anna Elizabeth Schlossberg, from his second marriage; and two grandchildren.

“In confessing to psychological problems, cops risked having their gun taken away and being put on clerical work,” said Stefan Forbes, director of “Hold Your Fire,” a documentary profile of Dr. Schlossberg that won the 2020 Library of Congress Lavine/Ken Burns Prize for Film. “The ‘rubber gun squad’ was seen as the ultimate humiliation. Harvey helped remove some of that stigma, which persists today.”

Mr. Forbes added: “It’s important to remember what an outsider Harvey was in the N.Y.P.D. In a top-down, paramilitary, predominantly Irish police culture of command and control, in walked an iconoclastic Jewish intellectual pacifist, a beat cop with a Ph.D. in psychology.”

But as a curly-haired, mustachioed officer from the streets who sported gold rings and a flashy watch, Dr. Schlossberg related to his colleagues. As Dr. Collarini Schlossberg said in the film: “He was a very humble man, who spoke in thick Brooklynese. He was one of them.”

Dr. Schlossberg expanded his work into profiling crime suspects, including the so-called .44-caliber serial killer known as Son of Sam in the mid-1970s.

After leaving the police force in 1978, Dr. Schlossberg was chief psychologist for the Port Authority of New York and New Jersey from 1990 to 1999 and for the Police Department in Rye, N.Y., from 1988 to 1994. He taught from 1974 to 1982 at the John Jay College of Criminal Justice in New York and was an associate professor at St. John’s for 27 years. He also maintained a private practice in Forest Hills, Queens, where he lived.

Dr. Schlossberg, who kept a portrait of Freud in his office, described his approach to a gunman in a standoff this way: “Let me see if I can see the world the way he sees it, see what he’s feeling, what’s pressuring him and then see what the alternate types of solutions are. And then I can offer them to him. And maybe he’ll be able to see the same thing. It’s kind of entering into his madness to help him find solutions.”

In the Brooklyn sporting goods store siege, he said, when the gunmen sent out a note asking for a doctor and food, he knew that the police were doing the right thing by waiting, because, he knew, the gunmen had been bluffing when they insisted that they were willing to resist to the death.