Back in 1998, bookstores in English-speaking Canada suddenly looked like their counterparts in France, with their windows and floor displays dominated not by novels or popular nonfiction but by dictionaries. More precisely, piles of the first edition of the Canadian Oxford Dictionary. 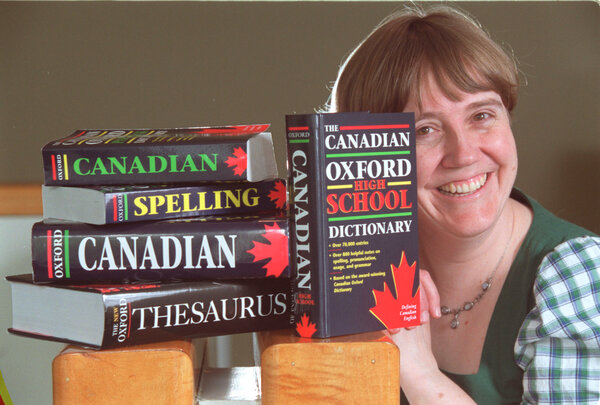 It rapidly became a best seller and the talk of the nation. Until then there had not been a general purpose dictionary covering contemporary Canadian English.

What’s more, thanks to regular appearances in the media, Katherine Barber, the founding editor of the dictionary, was as much a celebrity as some of Canada’s leading authors.

Late last month, Ms. Barber died at the age of 61. Cancer that had been under control had spread to her brain and she died in April.

The obituary I wrote about Ms. Barber is, perhaps inevitably, almost as much about the Canadian variety of English as it is about her life.

[Read: Katherine Barber, Who Defined Canadian English, Is Dead at 61]

When the article appeared online, it provoked a lot of Twitter conversation about Canadianisms, particularly over the correct term for underwear. In the first sentence of the obituary, I went with “gotchies,” which the first edition of the dictionary casts as the “diminutive of GOTCH.”

But many people had other ideas, including: ginch, gonch, ginches, gitch, gitchies and gaunch. (Forgive me if I missed some.)

Judy Gombita, a Torontonian who favors “gotchies,” finally offered this analysis: “So the word definitely BEGINS with a G and often ends with CH, but the in-between varies widely across English Canada’s regions.”

The underwear debate underscored a key aspect of Ms. Barber’s approach to language. While she was called Word Lady during her regular CBC Radio time slot, she always emphasized that no single word, spelling or pronunciation defined the “correct” form of Canadian English. Her work was about discovering how English-speaking Canadians used their language rather than telling them what they should be saying and writing.

People outside of Canada have long been exposed to Canadianisms in film and television series exported from here. “Letterkenny,” the streaming comedy series set in a fictional southern Ontario town, has taken that to new heights. While some of the (printable) terms used by its characters are standard hockey slang or Canadian English, like laneway and rez (for reserve), its writers have gone on to create their own fictional dialect.

This article from Babble, an online language learning company, makes a compelling case that the fictional speech in Letterkenny is a “conlang” or constructed language like Newspeak in George Orwell’s “1984” or Nadsat, the mix of Russian and English that Anthony Burgess created for “A Clockwork Orange.”

As I wrote in Ms. Barber’s obituary, declining sales of print dictionaries mean that the Canadian Oxford has not been updated since its second edition was published in 2004.

Some, apparently younger, Twitter users posted that they had never heard some of the Canadianisms I included in the obituary. And while new Canadianisms have likely come along over the last 17 years, the fluidity of languages means that many others have just as probably fallen into obscurity. When I was growing up, the largest piece of furniture in my parents’ room that was devoted to sitting was the chesterfield. Its counterpart in my household is now getting new slip covers and no one has called it anything other than a sofa or a couch during the process.

There has been one update of sorts, however. Among the many sources Ms. Barber and her crew drew on was the Dictionary of Canadianisms on Historical Principles, which was published in 1967. It was a very different creature than the Canadian Oxford. Intended for scholars, it was essentially a collection of Canadian words going back to the arrival of English speakers in what became Canada rather than a general reference dictionary and a snapshot of Canadian English use, spelling and pronunciations at that time.

In 2017, an expanded and updated second edition of the Dictionary of Canadianisms appeared online. Its website is currently being updated, so it is currently only available in a less-than-ideal digital archived form at the moment.

Somehow, I never interviewed Ms. Barber. But her wit, good humor and enthusiasm always came through on the radio and on television. Her great passion was ballet and she was as well known in those circles as she was in the world of language.

But her sister, Martha Hanna, told me that Ms. Barber’s interest in language didn’t extend to crossword puzzles.

“She said: ‘I don’t want to spend my life thinking about how to answer these stupid questions,’” Ms. Hanna, herself a crossword enthusiast, said of Ms. Barber. “Perhaps she knew words too well to to find crosswords amusing.”

Visitors to the 2021 Venice Architecture Biennale can’t actually see the Canadian Pavilion. It’s been covered over with material added to make it a giant green screen. A smartphone app transforms the exhibition hall into a shifting array of Canadian buildings, including Simon Fraser University in Burnaby, British Columbia, and Hatley Castle in Victoria. The exhibition inside looks at how Canadian cities and towns are often impostors, doubling as other places around the world in movies and on television.

On Thursday, the Canadiens and the Maple Leafs met for the first time in a post season game since 1979. The Hab won 2-1, but I am not taking sides. Curtis Rush reports that the return of the playoff rivalry has been muted by pandemic restrictions. “Montreal is still known for its fashion and cuisine, flair and intimate quaintness, while diverse Toronto is known for its brashness, flashy skyline and economic clout,” he wrote. “Both fan bases claim they live in hockey’s mecca.”

How are we doing?
We’re eager to have your thoughts about this newsletter and events in Canada in general. Please send them to [email protected]

Like this email?
Forward it to your friends, and let them know they can sign up here.